Are imported contacts links unique to a device?

I have two computers (work, home) that each have a devonthink license. I sync several databases between them over iCloud (CloudKit).

If I import a link to a contact using files>import>contacts...>link the link only appears to work on the computer it was created on and does nothing on the other machine. Is this the expected behaviour (or, known limitation), or am I doing something wrong?

If I import a link to a contact using files>import>contacts...>link the link only appears to work on the computer it was created on and does nothing on the other machine. Is this the expected behaviour (or, known limitation), or am I doing something wrong?

Do both computers use the same macOS version and are the contacts synchronized by macOS?

Yes, both are on macOS 12.1. Contacts are synced over a mix of iCloud and Exchange.

As long as the IDs of the contacts are the same on both computers it should indeed work.

What is the Kind shown for the link on the receiving machine? 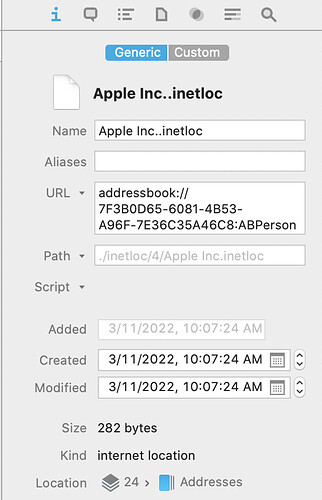 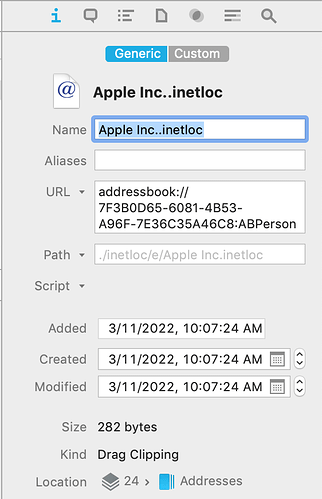 However, the file is intact on both Macs… 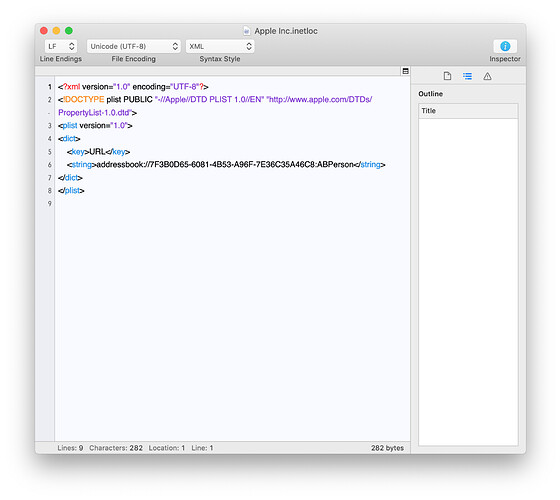 but the receiving machine is showing the Kind as Drag Clipping instead of Internet Location.

The kind is just what the system returns, should be identical to the Finder (and doesn’t affect the functionality of DEVONthink at all).

In the Finder on the receiver it’s indeed reported as a Drag Clipping after the sync.

Strange… I imported a new contact on the receiving Mac. It displays as a linked file but is also reported as a Drag Clipping…

However, on the first Mac, the file’s Kind is correct but it now doesn’t show the new contact correctly…

I’m seeing something closer to what @BLUEFROG sees, but with a twist. Here is the url I imported as a link on my MacBook Pro:

And here is the URL for the same contact I imported on my desktop:

As with @BLUEFROG’s attempt, one opens fine, the other just shows a placeholder. On the MacBook I get the same, but they are flipped in terms of which one loads and which on doesn’t

That’s very strange that you’d get a different UUID. Mine are certainly matching.

The only difference I have here is I am on a Cataline and a Mojave machine (and Mojave is the one reporting the drag clipping).

Yes, it is very strange. I went into ~/Library/Application Support/AddressBook and deleted everything, restarted contacts on both computers (do try to establish that they were indeed in sync). Problem persists. To make it weirder, both files have Kind listed as internet location. No drag clippings here.

And you’re still getting different UUIDs for the same AddressBook entry?

Thanks for following up (and on a Saturday!). Yes, the problem is still there.

You’re welcome.
That would be highly unusual behavior. Are you sure it’s not a duplicate entry in Contacts?

Definitely not duplicates. As I dig deeper, it just gets weirder and weirder. Anyways, I no longer think this is a DevonThink issue… there is something weird going on with these two machines.

So, I think there is something way above my pay grade that is working differently between my two computers that has nothing to do with DevonThink. Possibly because on is intel and one is m1? Who knows. Thanks for trying to help, though. I’ll just import vcards instead of linking

That is very strange indeed!
However, I will say this… Apple’s Calendar and Contacts apps are notorious for creating duplicate entries, more so Calendar. I’ve had to clean out duplicates before so perhaps it’s happening for you but not displaying (or purging) the original. Hard to say as we can’t reproduce this at will.