Is there a fast way to record an audio note with DTTG and save it in the global inbox?

I love to record ideas while driving, unfortunately it’s quite tricky with DTTG because of the many steps needed: [+] button on the main screen, then “Media”, then “Audio note”, then the record button, finally “Use” (sorry for the possibly wrong translation, my DTTG is in french), “End”… and I have to do it again from scratch for the next idea I want to record.

Quite dangerous while driving

Quite dangerous while driving

It’s possible to take text notes via Siri, maybe this could be an alternative especially while driving?

I tried that already, it’s a viable alternative but it’s not that practical when I suddenly have 5-10 different notes to “dictate” (means 5-10 different files or records)…

Here is an iOS Shortcut that will prompt for voice recorded input and append it to a single note in DEVONthink To Go that might help. It also reads back what Siri thinks you said so you will know immediately how accurate (or not) the text will be in the note.

You will need to enable ‘untrusted shortcuts’ to import this. On import it will ask for the UUID of the note you want to append too and has a comment on how to get that UUID.

You can activate it from the homescreen widgets, Shortcuts app or Siri by saying ‘Voice Record’ (you can rename the shortcut as desired).

Let me know of issues or questions. I thought about asking for a note name, searching and grabbing the UUID but the search could return a bunch of results and I wouldn’t know which one to use so asking the user for the UUID seems to be the safest.

Your shortcut seems to be exactly what I need, fantastic!

… but I’m having an issue to install it

Because I’m using an “old” iPhone 6 with iOS 12 (too old to upgrade to iOS 13), I’m getting a message that your shortcut was made for a newer version of the app Shortcut.

By chance would you have an older version of it?

In case someone has iOS 12 or remembers enough to ‘downgrade’ an iOS 13 shortcut, I am attaching an image of the shortcut source. I am using FIg so hopefully the image attachment works.

The first text field should have the UUID from a note in your databases as mentioned in my earlier post. iOS12 won’t have the install-time prompt feature. 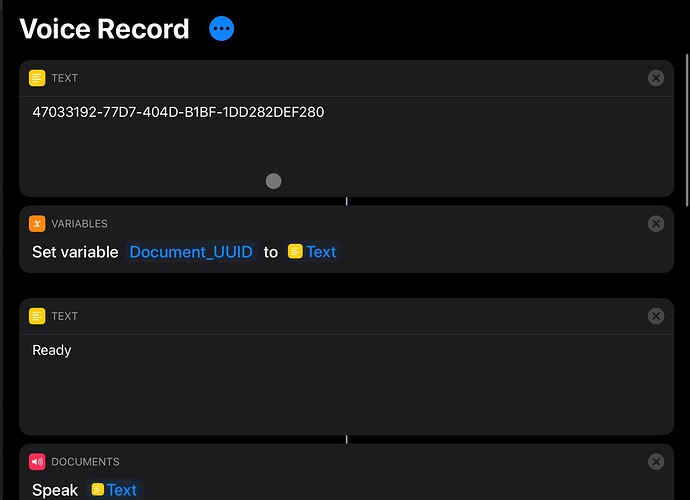 Thanks a lot @leebutler

Does this mean it’s not possible to record audio straight into DTG? I do this with often with Evernote for song ideas.

How about photos straight into DTG?

I’m currently trialling DEVONthink but I’m concerned about DTG because unfortunately there’s no trial, quite daunting.

I didn’t read the thread above, but jumping straight to your question.

Probably best if at this stage you take a look at the DEVONthink ToGo User manual to see what the app does. Published at https://download.devontechnologies.com/download/devonthink%20to%20go/2.7.7/DEVONthink%20To%20Go%20Manual.pdf

On my iPhone running DEVONthink ToGo, while I don’t really ever take audo into it, the screen to do so is shown on the attached screenshot. 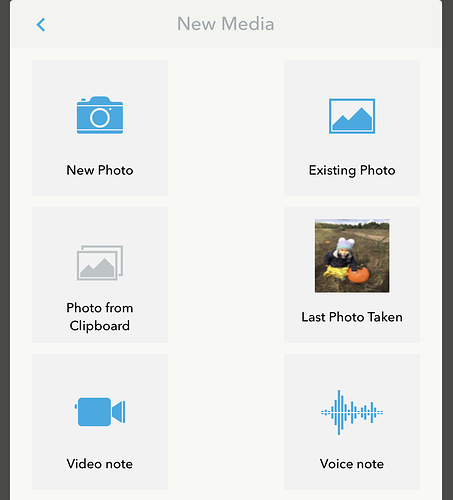 Reading the manual, that’s what I was thinking. Would like to do the same for DT.