I have a lot of smart rules that are just to tag documents that contain a certain word or phrase and aren’t already tagged. I’d love to automate this somehow - does anyone know of a script where I could input a list of, say, 20 search terms/tag names and it would auto create the rules? is that possible?

This isn’t possible, smart rules aren’t scriptable. But smart rules can execute scripts, maybe one smart rule using an embedded script could replace all your existing smart rules? A screenshot of one or two smart rules would be great.

here’s a picture! they all pretty much look just like this. 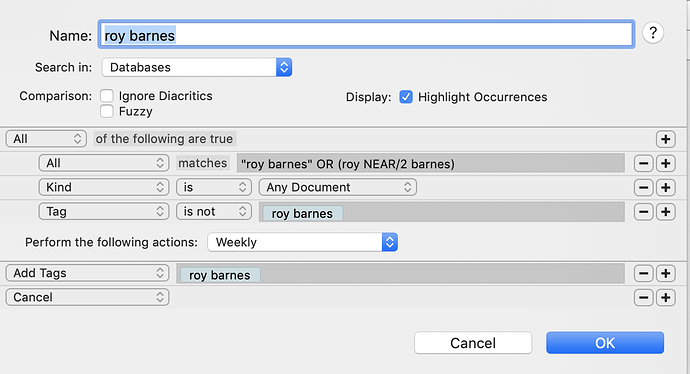 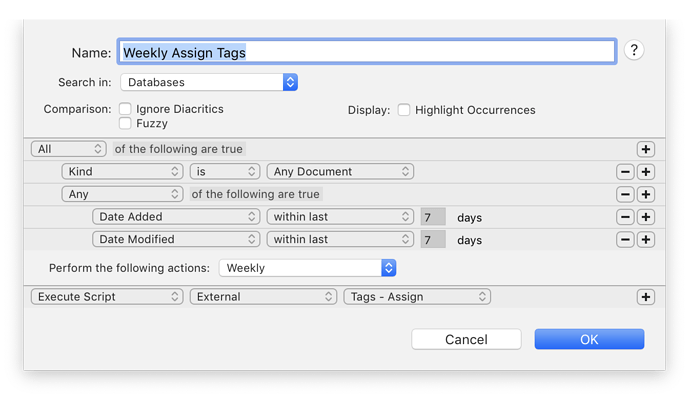 The “Tags - Assign” script scans the documents added/modified during the last week for both hashtags and already existing tags. In case of case-insensitive tagging (see File > Database Properties…) and an existing tag named “roy barnes” the documents should be tagged as expected, therefore it’s possible to define tags only, not smart rules.

wait…it’ll go through ALL my tags and assign things immediately? sorry, i’m sort of amazed by this, so let me make sure i understand.

ok now two other clarifying questions (in case i did in fact get that right.) 1) what if i wanted it to find “christian grunenberg” and (christian NEAR/3 grunenberg). is there a way to do that automatically? i’m assuming no but worth a shot. (sub-question to this question – is there a way to do that by, say, making a tag that was “christian NEAR/3 grunenberg”? i probably wouldn’t do this, but just out of curiosity.)

this is amazing. i hate myself for not realizing it earlier. thanks! 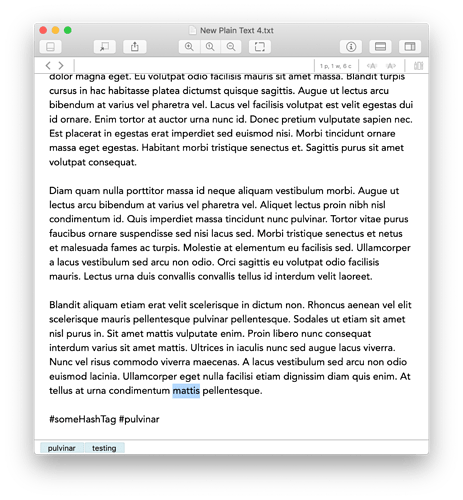 And here is what the script returns for this file… 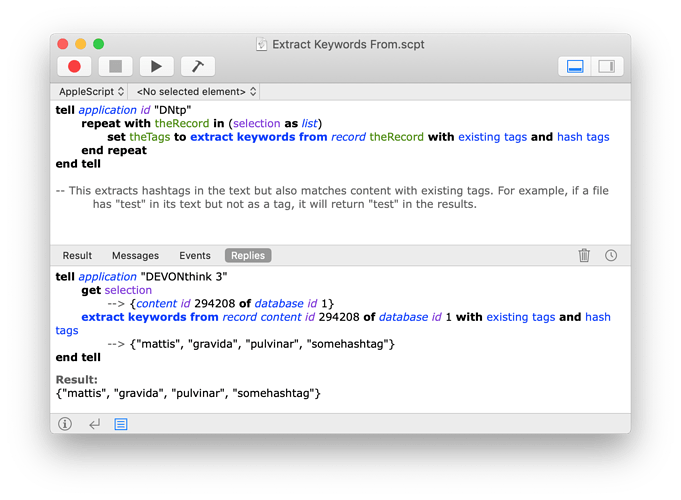 That’s correct (and thanks

Operators aren’t supported but aliases of tags are, you could e.g. add the alias C. Grunenberg.

is there a way to limit the tags this script takes on?

Only by customizing the script and excluding e.g. 4-digit numbers.

okay i have no idea how to do that, but am hoping to get some help! could you customize it and only have it look for tags in a certain group, theoretically?

cool! so two questions - 1) this is a different script right? than the one christian listed? if so, what is the difference? it seems like they do similar things. i thought this keyword one was something about concordance…am i wrong?

Theoretically, but that would certainly require more coding as it’s not part of the core of the script.

Dumb question, but are smart rules only available on DT3?

Yes, this is a new feature of version 3.

Ok, here’s something I don’t understand about tags. I realize the above may be an example, but if it represents real world use… Why go through the trouble of tagging something as “roy barnes” when you can simply search for “roy barnes?”

I’ve attempted to use tags before, but found I was tagging the obvious: books, article, food, etc., which provides no real use that I could see. Given how many people like/want to tag, I must be missing something. Even something simple like “Invoice” wouldn’t provide any useful connection, as I put things like this into a folder for, well, invoices.

In my mind, I envisioned using tags to discern a deeper connection between documents. However, that would entail me tagging each document an assortment of tags, many of which may be abstract in nature. But then, I remember DT can do this already, so I’m missing the point of tagging.

What am I missing, because if there’s a more efficient way of document archiving, I’d like to know more.

Why go through the trouble of tagging something as “roy barnes” when you can simply search for “roy barnes?”

Because Roy Barnes may contextually relate to documents that don’t include his name.

Tagging is optional, not required. If they don’t make sense to use, don’t use them. Some people use a ton of tags. Would I approach things that way? No. But if that makes sense to them, it’s all good.
When I worked for Ironic Software, with Spotlight-enabled and dedicated software, I tagged a lot. With DEVONthink, I don’t tag very often outside of support purposes (though they are still useful to me).

So definitely be open to learning something new, but use DEVONthink in the way that make sense to you, not in the way others use it. (And that’s for everyone, including me!)

Because Roy Barnes may contextually relate to documents that don’t include his name.

Does that mean that the tag of “roy barnes” is used differently when tags are used in search?

I realize tagging is optional, I’m just trying to better understand a method which others use in hopes it would benefit me, too. I suspect my document management needs are not intricate enough to need something like tagging, but I still try to learn from what others are doing.

Does that mean that the tag of “roy barnes” is used differently when tags are used in search?

If you don’t use an explicit search prefix, like tags:, tags wil be included in the implicit All scope. Using the search prefix will target only tags.

I would dispel this myth from your mind

Tagging has absolutely nothing to do with the intricacy of your needs, and no one (yourself included) should feel it’s something for the intelligentsia, etc.

DEVONthink is fundamentally a simple application that can be used simply or in very complex ways. So here is a simple example:

Say you have a recipe database. You could tag a recipe or ingredient as Mediterranean, authentic, diabetic-friendly, or even yummy.

After tagging, you can search for yummy dishes, make smart groups of diabetic-friendly foods or ingredients, etc.

Nothing intricate at all.

no one (yourself included) should feel it’s something for the intelligentsia, etc.

Oh, I get that. And I understand the example. However, every time I look into tagging files, I end up tagging with the obvious, which is already contained in the document in some form.

Using the example above, if I had clipped an authentic Mediterranean, diabetic-friendly recipe, chances are all of that info would already exist in the recipe in some form (the words “authentic”, “Mediterranean”, and possibly even some form of “diabetic-friendly”). The way I file documents, anything that would be “diabetic-friendly” would get filed in the Diabetes group, and I wouldn’t actually keep a recipe if I tried it and it wasn’t “yummy.” And making tags for the ingredients seems superfluous as they’re already in the document.

The above is an oversimplification, yes, but it’s a good example of how my tagging goes. What I end up using for tags isn’t really needed in order to find the document because I’ve either filed it properly in DT or the data within the document is already enough to find it.

So when I come across people talking about their tagging system it makes me wonder how others are using it and how well it works. It’s not that I’m unhappy with DT’s search results (quite the opposite), but I keep my eye open for new ways to do things, especially if they’re efficient.

I think it’s good you’re open to learning. I can’t speak to the individual uses of tagging. I have run into many people who have tagged extensively, but never really used the tags. Perhaps others will weigh in.