I’m using a Xerox WorkCentre 6515 to scan my documents. This MFP is capable to scan into an SMB Adress. DevonThink on my Mac does only offer Bonjour Server services, which is not covered by my Xerox. So I can scan using FTP to write the documents into my local files and import them form there manually into DEVONthink. But how could Devonthink automatically informed about changes in my destination folder. Meaing when there a file arrives it is automatically imported to the in folder at Devon think? I can use SMB, FTP and email. Is there any way?

I think if you direct the outut from the Scanner to the Mac, to DEVONthink’s “Global Inbox”. See where you can install that on the “Install Add-in’s” menu. DEVONthink watches that folder and anything that arrives will be automatically imported into the Global Inbox.

See Page 8 in the manual for discussion of this feature.

FYI, for me while the “Inbox” shows in Finder sidebar, it is located in the file “~/Library/Application Support/DEVONthink 3/Inbox” Save your files there.

DevonThink on my Mac does only offer Bonjour Server services,

Afaik this is only relevant in the context of sync. You can run an SMB server on your Mac as a matter of fact and have your scanner send the files there. See system preferences, sharing, file sharing

I think if you direct the outut from the Scanner to the Mac, to DEVONthink’s “Global Inbox”.

This would be true only if no OCR operation was involved.

Output to a specific folder, indexed in DEVONthink, would be a safer bet. You could target the indexed group with Move into Database, OCR > Apply, and Move or File actions.

This would be true only if no OCR operation was involved.

Not sure I understand the issue.

I guess if the scanner is on the network and not directly connected. But still, seems there would be a way, but it’s special to that config.

If the scanner software was set to do OCR, the operation would fail if the file was saved to the Global Inbox’s alias.

My issue is NOT about sync. Its about importing scans (OCRed PDFs) for the first time. I and my device are able to send the newly scanned files via SMB to the HD of my computer where DevonThink runs. But these files are not automatically imported to my DevonThink Database. Yes, I can click and drop these files from finder to DevonThink, but this is a little bit dump. Now I would say more precisely, I’d like to write directly via SMB or FTP to the Inboxes or to the database files of DevonThink. And by the way, I’m using V2 and the OCR is done by the scanner itself.

That’s what I meant. Write the scanner files to a folder, where DevonThink recognizes any changes and imports the newly stored files automatically at least when I start DevonThink the next time.

How can I monitor (you called it indexed) a folder by DevonThink?

My issue is NOT about sync.

I know. But Bonjour is about sync. So I pointed that out because you mentioned Bonjour.

Is there anything wrong with adding DT’s Inbox to the shared folders of your desktop’s file share? 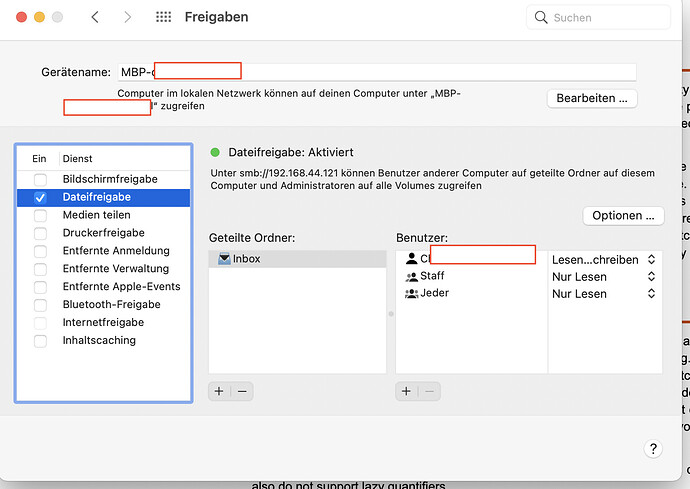 However, I don’t know if DT 2 provides a global inbox in the finder. This version has long been superseeded by DEVONthink 3 (currently 3.6.1)

As @chrillek noted: DEVONthink 2.x has been out of development for some time. We strongly suggest you upgrade to DEVONthink 3 sooner rather than later. Select ​DEVONthink (Pro/Pro Office) > Purchase ​to open our online store with upgrade options specific to your license.

Indexing a watched folder can be done via File > Index Files and Folders in DEVONthink 3.

Since the OCR is being done by the scanner software, you definitely don’t want to target the Global Inbox alias in the Finder’s sidebar.

Yesterday I purchased V3. But I saw no advantages and no bug improvements (com with my scanner, coop with synology cloud station etc.), so I asked for a refund which was kindly accepted.

Writing into the inbox file via SMB does not help. A error occurred because DT does something with the file before the scanner finished its job.

Indexing is also unfortunately not very helpful. After I sorted the incoming file from the indexed folder, the original file stays in the index folder as described. So I’m creating dublicates which I don’t want.

So far, I stick to SMB transfer to a normal folder on my local machine and import the scan files by Klick and drop🤷🏼‍♂️

Writing into the inbox file via SMB does not help. A error occurred because DT does something with the file before the scanner finished its job.

That is correct and what I already stated.

Again, the 2.x line is out of development. Version 3 is far superior and has replaced 2.x. If you continue using 2.x, you do so at your own risk.