Backing up to Clouds: CrashPlan, Dropbox and iCloud question

Question: If all my local equipment disappeared could I restore all my DT data to new equipment from the DropBox Sync Store or iCloud backup? or would CrashPlan be useful?

Background: I have just setup DEVONthink and DEVONthink to Go on two Macs, two iPads and one iPhone, and pretty happy with everything (but aware I have a lot to learn). All are sync’d via the DEVONthink packet sync store on Dropbox. As advised in manuals I have turned off the re-download of the sync store to the local Dropbox/Apps folder via selective sync setting.

The actual databases are in the default location ~/Databases on my Macs. I am happy with my local backup arrangements (with Time Machine and CCC clones), but not sure about my off site Cloud based backups.

I have (for now) added the ~/Databases folder to my CrashPlan backup. I see that the databases behave like folders (not files) so only new and changed content is backed up each time.

But I also have the Dropbox sync store, and DTTG is backing up to iCloud by default. So wondering if having the actual databases on CrashPlan as well is overkill?

The size of my local Databases folder is 14.81 GB
The size of my iCloud backup of DTTG is 17.15GB on my iPhone and 16.21GB on my iPad
Can’t see what size the Dropbox Sync store is as it is not downloaded to my Macs (and can’t see size on the Dropbox Web interface)
I assume my CrashPlan backups are same size as ~/Databases.

If all my local equipment disappeared could I restore my databases from the DropBox sync store or iCloud backup? or would CrashPlan be useful?

If all my local equipment disappeared could I restore all my DT data to new equipment from the DropBox Sync Store or iCloud backup?

Usually you can but sync stores (including iCloud) are not recommended as backups or at least shouldn’t be the only ones.

Thanks. Sounds like CrashPlan’s ability to restore the actual databases is worthwhile then.

(I have local Backups, but CrashPlan is my Offsite last resort backup)

I’d make sure Crashplan does a snapshot-style backup, not continuous backups. The Arq service is known to be data-safe for our databases.

Thanks I think CrashPlan does backup versions. Arq might be better but would be much more expensive for me with 4TB in the cloud. I also have backup history in Time Machine back ups. I think if everything went up in smoke I would be pretty relieved to be able to download the latest versions of my Databases from CrashPlan.

what do you mean with “snapshot-sytle” backup? what might be the problem with other backup solutions others than arq? just to understand what is the critical point in backups of devonthink.

(do databases have to been closed during backup, so that backup is not corrupt)? or can a database be backed up while running DT and while working with a database?

A snapshot-style backup looks at a machine at a single moment in time and backs up the data from that moment. It is not doing a continuous backup as files are changing. If you ever looked at Time Machine as it’s Preparing Backup, it’s detecting and caching the changes to be sent to the backup location.

Thanks. I had been misunderstanding the term ‘snapshots’. I had thought you meant versioning.

Anyway, I think this article confirms that CrashPlan does snapshot style backups:

Actually, that article makes me a bit uneasy. fsevents are going off all the time, as changes are made to your files and system.

Also, from the video on their support pages… 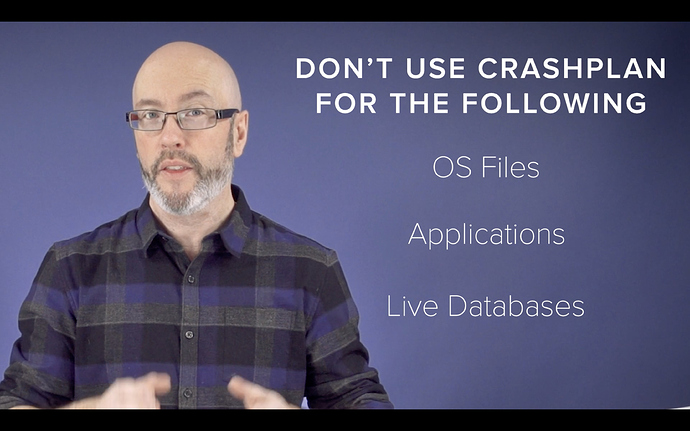 … though it’s undefined what live databases actually are here.

Based on another screen capture, it did show Last backup: 30 minutes ago, so maybe it is okay.

Thanks again. I guess I am somewhat surprised that it is uncertain, after all the years these two well known programmes have existed, whether CrashPlan is safe for DEVONthink!

A lot of people rely on CrashPlan, so if DT databases are not safe with it there should be some clear warnings in DT and CP user guides.

I will have another look at ARQ.

Maybe a better way for me would be to make Crashplan do a daily backup during the night, and get in the habit of closing DT before going to bed.

What about iCloud? iCloud backup is on by default in DTTG so I assume DEVONthink believe that is OK. Would a restore of a DTTG iCloud to an iPhone or iPad sync across to my Macs in a disaster scenario.

Maybe a better way for me would be to make Crashplan do a daily backup during the night, and get in the habit of closing DT before going to bed.

That sounds a bit better just glancing at it.

What about iCloud? iCloud backup is on by default in DTTG so I assume DEVONthink believe that is OK. Would a restore of a DTTG iCloud to an iPhone or iPad sync across to my Macs in a disaster scenario.

That is not the same thing as Time Machine, Arq, Crashplan, etc. is doing. iOS’ backup is not made for restoring files or applications. It is made for device setup and restoration, so no I would not rely on that as a primary backup method.

I understand that iCloud Backups don’t work the same way, but if an iDevice restore is carried out from an iCloud backup, and then that iDevice is sync’d to a Mac, would the Mac be populated with the databases?

My conclusions so far are:

Sorry to labour this topic!..why is closing the Databases before Crashplan only “a bit better”. Doesn’t that remove the whole snapshot issue.

Because I’m not in that situation and have no technical database to give you an authorative “That’s perfect!”

OK thanks. So Time Machine and ARQ are the only ones confirmed…but others might be OK.

Potentially.
CCC appears to be a very likely candidate, especially reading some of their FAQ. If anyone knows backups, Mike Bombich and his crew certainly seem to be experts in that area.