Hello, sorry for raising question again. I read a previous post, explaining about backup and sync. It is saying that the sync function isn’t same for backup. If I am using dttg only with iPad device, not using Mac desktop version, there is no way to back up the database and the docs, e.g. if my iPad is stolen or broken. I didn’t expect this… not sufficient research before buying it, my fault. Though I agree that it is great app.

As I see iCloud backup option in setting. I wonder how I should see it as setting a iCloud sync store. If I set iCloud backup, does it mean that when I back up my iPad, the things in dttg will be backup, so when I restore backup to new iPad or an existing one, all database and their original file will be there, still?

Sorry to revive this thread but it seems as good as any place to ask.

I have the setting “Backup data to iCloud” set in both my iPhone and iPad DTTG. My four databases total 14.8GB on my Macs, but my iCloud data shows 24.7GB used by DTTG.

All syncing is done by Bonjour no iCloud or Dropbox, though I have used these in the past. When I stopped using iCloud I cleaned the database, so I don’t think the extra iCloud usage is a left over.

Am I correct that iCloud syncing and DTTG backup to iCloud are completely separate?

I have the setting “Backup data to iCloud” set in both my iPhone and iPad DTTG.

You telling your iPad and iPhone to backup to iCloud (in the devices’ Settings) app does just that-- backs up the DEVICE to Apple’s iCloud servers. Whatever is on the device (iPad and/or iPhone), including DEVONthink ToGo application and data (as it exists on device), goes there at intervals controlled by Apple.

My four databases total 14.8GB on my Macs, but my iCloud data shows 24.7GB used by DTTG.

That is irrelevant comparison. on your iPad and iPhone devices there are more than databases. Also there is the DEVONthink ToGo Application. Apple’s IOS consolidates all an app’s data inside the app, somehow or another.

All syncing is done by Bonjour no iCloud or Dropbox, though I have used these in the past.

Since you say all syncing is done by using the Bonjour protocol (and not via iCloud), then it is just that. You are not using the iCloud Servers to do any synching. If you told DEVONthink ToGo and desktop DEVONthink to sync via iCloud then your computer and devices would use disk space on the iCloud server independent and in addition to any device backups disk space to do the syncing.

When I stopped using iCloud I cleaned the database, so I don’t think the extra iCloud usage is a left over.

“Cleaning” is the word used in DEVONthink to “clean up” the database, which includes deleting it I guess. Bottom line is that the database disappears on the device after cleaning.

Am I correct that iCloud syncing and DTTG backup to iCloud are completely separate?

So yes, the DEVONthink ToGo iCloud synching (that you are not doing) are indeed completely separate from your devices backing up to Apple’s iCloud.

And you can turn off what backups you want, but if you turn off your backups on one or the other devices, then that device will not be backed up. That’s normally not recommended, but up to you. I certainly would not do it.

In wrap-up, please remember that synching is NOT a backup of DEVONthink data.

In DTTG you can select whether or not the DTTG data is made available to iOS for backup to iCloud; you quoted that setting in your post, namely “Backup data to iCloud”. If you have that setting activated on both devices, you will almost certainly effectively have two backups of your data in iCloud. If you turn one off, you will not be able to restore DTTG data from iCloud to that device - but you would be able to sync it from the other device.

In any case, yes, sync and backup are completely separate. The “Backup data to iCloud” setting in DTTG is only DTs brilliant way of giving us control over whether we want DTTG data in the backup made by the system or not. Sync, on the other hand, is a mechanism for making the content on two or more devices identical.

Actually, I think the OP is referring to the setting in DTTG (settings, right down at the bottom) rather than in the iOS settings

Maybe. That’s why I qualified "in the devices’ Settings).

I will probably leave as is for now. But my databases are backup so many ways (including archived exports to offsite, BackBlaze and CrashPlan) that not having one iPhone or iPad backing up to iCloud feels OK.

I must admit I don’t backup DTTG to iCloud; whilst those backups are encrypted during transport and at rest, they are - to my knowledge - not end-to-end encrypted in that Apple can access the contents. On the basis of “if the good guys can, the bad guys will” I dislike that setup.

I decided to go ahead and turn off iCloud Backup on my iPad and iPhone.

I waited 24 hours but the 24.7GB remained on my iCloud. So I opened Settings > AppleID > iCloud > Manage Storage. Here I could see DTTG showing 24.7GB, and with the option to delete. This produced the following rather alarming message: 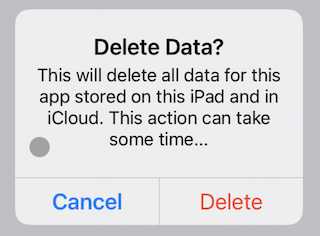 On reflection I decided this was standard Apple wording for a third party app and did not apply to DTTG backups. I knew that DTTG was only using iCloud for backup and not sync, so deleting the iCloud data was not going to delete the working data which is sync’d by Bonjour.

So I went ahead and the 24.7GB instantly disappeared from my iCloud usage.

Of course I immediately checked DTTG and all was well, and Settings > General > iPad Storage still showed 15.5 GB local storage as expected.

Is this indeed the correct way to remove the unencrypted backup? And will this procedure retain the encrypted sync data?

BTW: why is iCloud backup turned on by default in DTTG?