I just published an Applescript on Github (“Image auto-rename and annotate.applescript”), that renames selected images according the scheme

I.e., the new names will consist of “img” and a running number. The number will be increased every time the script is run. In this way, each renamed image file gets a unique file name. This reduces file name ambiguity which, e.g., becomes a crucial point when using DEVONthink’s WikiLinks feature. It also makes images better distinguishable from other files in DEVONthink’s search.

The original file names will be stored in the images’ Finder comments for which the script offers the following options: 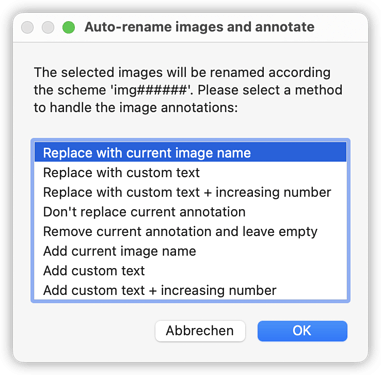 Replace with custom text: The current comment will be replaced by a custom text.

Don’t replace current annotation: The current comment will not be replaced.

Please, find further instructions for the script in the repository’s README file.

This script is part of my image workflow for Markdown files. A second script creates Markdown/HTML image link sets and reuses the stored Finder comments as optional image captions.

Thanks for this and the other scripts! I just had a look at the JPEG compression and DPI scripts of your toolbox and noticed that you use a shell script to process the images, therefore it’s actually not necessary anymore to script “Image Events” too. E.g. JPG compress XY% could be simplified like this: