Best way to test something is a document, in AppleScript?

A recent AppleScript script by @pete31 included a test for groups, like this:

I’m writing some other code where it would be useful to test that something is not a document. Some cursory testing of the values returned by type of X shows that for documents, it returns things like, “markdown”, “txt”, “PDF document”, “RTF”, etc. – basically, the specific type. What’s the best way to test against any document type? It’s quite impractical to write a test against all the possible specific types, even if I could produce a complete list.

test that something is not a document

I’m writing some other code where it would be useful to test that something is not a document.

What’s the purpose of the script actually? Anyway, this should be sufficient in the latest releases (checked this both in the Script Editor.app and the Scripts menu):

Somehow it seemed like there might be more types than groups, smart groups, and feed. For example, are tags really indistinguishable from groups at the AppleScript level?

What’s the purpose of the script actually?

Initially, my question was just so that I could further expand the icon-copying script from another posting, but that led to the question in my mind of how to test more directly that something is a document.

For example, are tags really indistinguishable from groups at the AppleScript level?

Yes, that is correct.

type (bookmark/‌feed/‌formatted note/‌group/‌html/‌markdown/‌PDF document/‌picture/‌plist/‌quicktime/‌rtf/‌rtfd/‌script/‌sheet/‌smart group/‌txt/‌unknown/‌webarchive/‌xml, r/o) : The type of a record. Note: In compiled menu/toolbar scripts you might have to use a string representation of the type for comparisons.

@cgrunenberg: Since there is a tags group class, should there be a separate type as well?

Where is that list of types from? It looks like a line from an AppleScript dictionary description, but I can’t find that in what Script Debugger shows.

I don’t use Script Debugger. I use (and have always used) Apple’s built-in Script Editor.

I overlooked the “type4”, which I mistakenly assumed would be like one of the other “type” entries, but in fact, clicking “type4” reveals a long list of types (matching what you see in Script Editor): 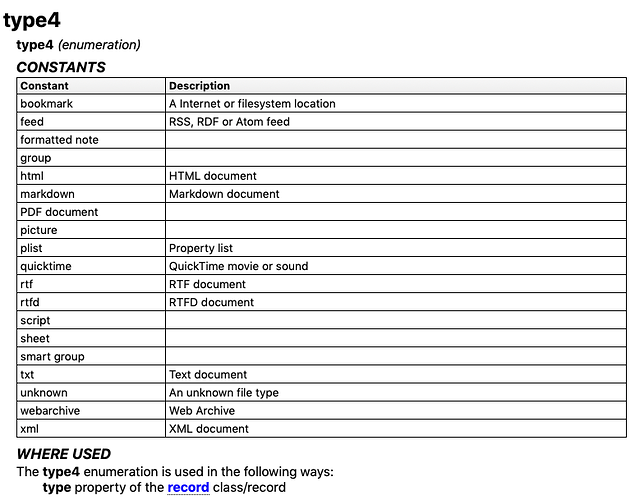 No problem. That could be helpful info for others new to Script Debugger.

@cgrunenberg: Since there is a tags group class, should there be a separate type as well?