So, with Box.com removing WebDAV support, I just spent some time setting up WebDAV on my home Synology server. It took me quite a few attempts. As a result, I have a bunch of invalid sync settings in my DEVONthink Pro settings.

Unfortunately since they’re invalid, I can’t delete them – the “-” button is grayed out if I select them.

I know they’re not really important, but is there any chance of a fix to let me delete them? I’m a bit wary of going into DEVONthink’s preference files with a plist editor… 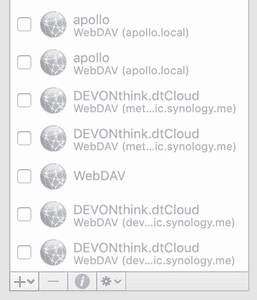 These are probably not yet completed location templates (DEVONthink doesn’t remove them automatically so that you can change them after a failed attempt), they should disappear after restarting the app.

Looks like most of them disappeared, but I’m left with two that didn’t, both referring to Zeroconf addresses.

While I’m reporting fairly trivial bugs, it seems that either DT2go or DEVONthink Pro has an undocumented size limit on the sync store encryption key. I originally set up a long key of the
correct-horse-battery-staple-cheesecake-creosote kind, but when I went to set up DT2go to access the WebDAV store I kept getting bad encryption key errors. When I changed the key to 12 random characters the problem went away.

Looks like most of them disappeared, but I’m left with two that didn’t, both referring to Zeroconf addresses.

Yes, these are probably automatic templates for found Bonjour servers. But the size of the key is actually unlimited. How long was the initially used one?