Can I use the 2011 email script to send emails directly to the DevonThink inbox?

I have been reprimanded in the past for trying to apply old posts and scripts to DevonThink Pro 3, and would now like the OK before proceeding.

Objective: find a way to send emails directly to my DevonThinkPro3 Inbox

thank you in advance

Hello, in the “Requests & Suggestions” I asked for the possibility to import email directly from an IMAP-mailserver to DEVONthink. This would improve my workflow for all kinds of personal notes, because I could send or save notes to my mail INBOX or Drafts. Using the email-program or its web-interface is quite common to me. One could also use it when you’re on the go. Just use the smartphone, without need of special software. Because there seems to be no solution at the moment, I started…

As already suggested I would highly recommend to ignore such ancient posts as many of them are really outdated. DEVONthink 3 includes scripts for Apple Mail, also for rules. The scripts can be installed via DEVONthink 3 > Install Add-Ons…

I had already installed the mail plugin.

What I am trying to understand is how to trigger the plugin with apple mail rule which identifies emails that I want to send to DevonThink Inbox.

As far as I understand, a rule can only trigger a script, not a menu command.

The only practical option I have is to run a script. I don’t see how I can use the plugin which is a menu item.

I am sure that there is something that I don’t understand. 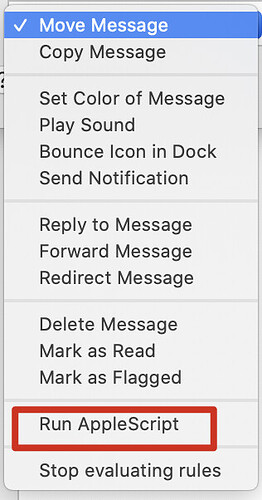 I had already installed the mail plugin.

That’s not what I suggested. This option installs the scripts:

And afterwards you can use the installed scripts in Apple Mail’s rules: