Can you help me with this rule?

I want to have a folder that OCRs the image files I put into, so I set a smart rule, but something is not working.

The desired result:
When I drag an image from outside DT3 into the folder, then DT3 OCR the image and convert to searchable PDF, then moves the converted and OCRed file to Inbox and delete the original one.

Here you find the screenshot of the rule. 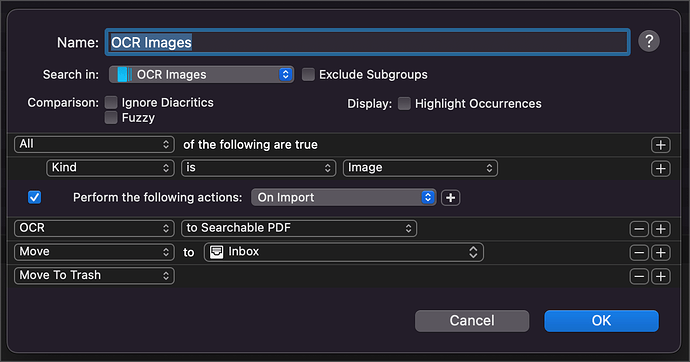 This is the correct behavior.

The input file never changes here so the actions are executed on the matched image. OCR’ing the file does not change the input (and there’s no OCR & Continue action).

Thank you for your reply.

Following your suggestion I can get rid of the “temp folder” because I can put the files straight into the Inbox, is it?

The reason why I’ve created a temp folder is that I don’t want ALL the images to be OCRed, but only some of them (i.e.: the screenshots of slides, of papers and similar).
How can I replicate this?

As for annotating the final PDF no problem: after these operations I move the PDF to its folder (I have many folders in order to categorize the files).
But I’m working to find a workflow with only one “Papers” folder in order to make the workflow faster and leaner (probably I’ll make a heavy use of tags).

Having a temporary location to process specific files is a very good idea. It isolates only the files you want to act on and you can move those files to their destination as part of the smart rule.

So I have to move the converted files in manual, is it?
Or perhaps I may create a second rule for that specific folder that moves all the PDFs away to another folder?
How about deleting the old file?
A third rule to delete all the images older than, say, 1 day?
May it be a good workaround?