Cannot get Epson FW800 to scan 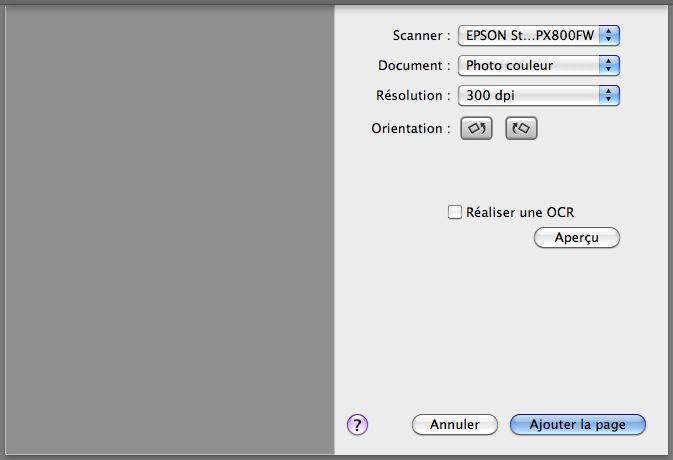 If i try with ExcatScan it juts keeps on initialising scanner for ever (see pict 2). 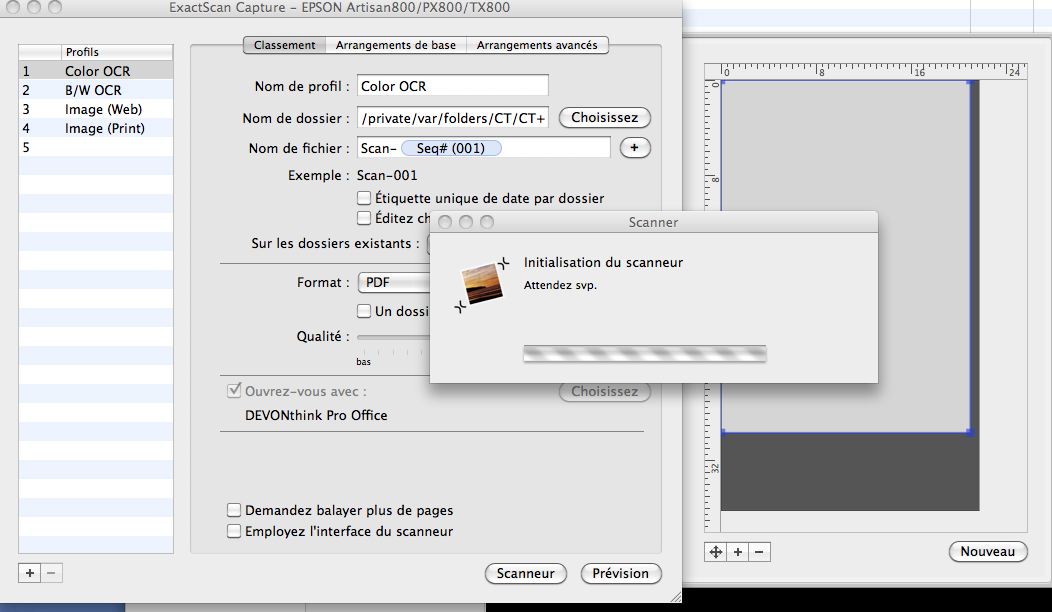 Exactly my problem! I have a Epson Perfection V 700 Photo.

We have received a new version of ExactScan Capture for the next release. Hopefully that will work.

But … how is this possible? I have an excellent, rather new scanner, recent system software (X.5.8 ), the most recent (beta)version of DT Pro Office, and yet scanning / OCR doesn’t work at all. Is this simply a question of inadeguate scanning / OCR software within DT Pro Office, or are things more complicated?

But … how is this possible? I have an excellent, rather new scanner, recent system software (X.5.8 ), the most recent (beta)version of DT Pro Office, and yet scanning / OCR doesn’t work at all. Is this simply a question of inadeguate scanning / OCR software within DT Pro Office, or are things more complicated?

Well actually you don’t, you have kind of a middle of the road, crappy do everything at once thingie. No offense, but most pro level apps I’ve found are very tuned to the snapscan on Mac, they do a really excellent job with the hardware and people who do a lot of scanning and ocr, would in my opinion anyway do themselves a big favor to check it out.

I’m sure it should work, but in the real world I’ve found exactscan or sitting and wanting to stick a pen through my eyeball with other scanners and acrobat pro or omnipage, even readiris though I have not tried the new 12 Pro version. So far decent OCR has meant fujitsu snapscan for me on the Mac platform.

The Apple scanner technology that is called Image Capture was not very reliable for applications that used it in pre-Snow Leopard. They seem to have rewritten it for Snow Leopard but we still have to support Leopard for the moment and it’s not backwards compatible.

As far as TWAIN goes, it’s quite a mess (you should have a chat with the people at ExactCode, make sure you bring a lot of Schnapps to help them when they relive their sufferings). I’m glad I don’t have to do their job. I would probably have taken a large axe and fixed some bugs in the different manufacturer’s implementations that way.

I’m ready to beta test the new ExactScan feature…but the PDFpenPro new scan function works (only in SL I understand) I assume via Capture…
What puzzles me is that the scan functions in DTP did work with no problems a while ago (I had an HP multifunction then). Things went wrong earlier this year and I’m really unable to point OS X release, or changed scanner or DTP release as “favorite” culprit…I assume each one plays its part.
In fact scanning interface in PDFpenPro is the same as Image Capture…

For integration of scanners to DT Pro Office the weak link is the driver provided by scanner manufacturers. The TWAIN standard is often treated very loosely (which is to say, sloppily).

But there’s another mode of scanner integration with DT Pro Office, using a scanner control application written for the scanner, often provided by the scanner manufacturer for at least some models.

Fujitsu’s ScanSnap uses this approach, via their ScanSnap Manager application. Works great with DT Pro Office and I’d agree with another poster that the ScanSnap is my favorite scanner.

Has the manufacturer updated the scanner control application and/or driver for your scanner model to the version of OS X you are currently using? Again, not all manufacturers are equal in the speed of updating after an OS X release, or in updating for older scanner models.

Not all scanner models are OS X compatible, and if the box says it is OS X compatible but mentions just OS X 10.2, it may not work under Leopard or Snow Leopard.

Before making a purchase, it’s a good idea to do some research. Go to the manufacturer’s Web site and check out the features. Pay special attention to the specifications for your computer’s operating system, whether a scanner control application is provided and the operating system requirements for that software. Don’t make a decision on price alone – although there are good scanners that cost no more than some that I would consider cheap junk. Do you really want one of those all-in-one printer/scanner/fax models? It may work for you, but remember that if one component fails they all do. Did you know that you probably won’t be able to scan if an ink cartridge needs replacement?

I usually look at a manufacturer’s software update/driver update support with one question in mind. When my equipment is 3 or 4 years old, will they still be updating it? Some only keep their recent models updated; I don’t want to buy their stuff.

One of my scanners (CanoScan LIDE 500F) is an inexpensive flatbed scanner that I’ve had for years. Under OS X 10.3.9 to 10.5 it could send output directly to DTPO via Image Capture (and later also by ExactScan Capture) and by a software application that came with the scanner. For several years I used Canon’s own software application to send output to DTPO for OCR. That software application no longer works the with latest Canon drivers under Leopard or Snow Leopard, but the scanner still works beautifully for DTPO captures via ExactScan Capture or Image Capture. I appreciate that kind of support. Canon didn’t make my years-ago purchase obsolete.

Thanks, Bill, Annard and others for your kind information!

But, to be honest, I find this situation very disappointing. There are too many words like “likely”, “probably”, “seem”, “may”, “may not” etc. in this discussion; and what a user or potential user of the Office version wants, is certainty. How would we react when a developer of (for instance) a word processor told us that his product would “probably” work in combination with our printer?

Timotheus, actually your example about word processors and printing illustrates the point that there are lots of printers that won’t print under OS X, and some that won’t print following an OS X update. I’ve owned printers that worked under early version of OS X that could no longer work at all under OS X 10.6.1, because printer drivers were not (and will not be) updated. Pages 09 and Microsoft Office 2008 are not responsible for that.

Scanning is more complex than printing, so problems related to scanning are more likely to appear. Anyway, those printers I’ve owned that would be door stops today because of printer driver problems became door stops long ago for other reasons related to mechanical and/or print head problems. I no longer buy printers made by that manufacturer.

But please note that inclusion of a scanner model in Apple’s list doesn’t necessarily mean that it’s TWAIN driver will be supported by DTPO2’s of ExactScan or Image Capture modes, as some scanner manufacturers write TWAIN drivers that only very loosely track the TWAIN standard. At best, inclusion on that list only implies that the scanner should be able to produce scan output under OS 10.6.1, so that – at a minimum – the user should be able to save scan output, import the files into DTPO2 and then OCR the files using Data > Convert > to searchable PDF.

Ironically, I didn’t see my ScanSnap on the list of compatible scanners under 10.6.1. Indeed, it seems that ScanSnap owners may have problems unless the output is directed to DTPO2. I have no problems sending output from my ScanSnap to DTPO2 for OCR and storage.

There are hundreds of supposedly Mac-compatible scanner models in use. It’s impossible for DEVONtechnologies to test all of them with DTPO2, especially as this is a moving target with OS X upgrades and driver updates.

We have encouraged users to post experience with their scanners on the forum. I have two, a ScanSnap (first generation Mac compatible) and a CanoScan LIDE 500F. Both send scan output to DTPO2 for OCR with no problems at all.