Which version of macOS do you use and where exactly in iCloud Drive are these documents located? A screenshot of Preferences > Locations might be useful too.

Thank you for the reply. I have uninstalled and will re install in a day or so. I took Ulysses mostly off the iCloud Drive. Partly because I don’t need it there and can’t see it at all. I will get back to you if that is ok but I need a day or so with other things. Really appreciated quick response but I am trying a slightly different tack, I will see how it goes. I was sure I could see Ulysses sheets initially and I am hoping a reinstall will fix it…

I moved Ulysses from iCloud Drive. I did try to put the Library file they use in locations in the preferences on DEVONsphere. As well as I could understand it, so the app could search there. However I couldn’t see any Ulysses files in any search I did from DS. I am also getting two instances of every DEVONthink 3 file that shows, not other places like websites which only show once. I then re installed yet again. Exactly the same. However I have tried to place the Soulmen Ulysses location from the Library. I found it hard to do in the first place and it didn’t seem to show in the window on DEVONsphere. All my permissions seem to be right. I know one can never be sure nowadays there are so many. Disk access is there though. 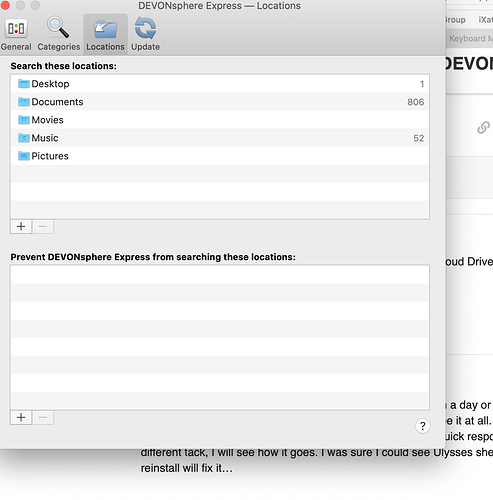 Are you able to find such a file after saving it on the desktop and updating DEVONsphere Express’ index?

No I couldn’t find anything in the copied to Desktop File. I can actually only see backups in the only Soulmen file I can find in Library too. I don’t fully understand how they do it in fact.

I have to say I followed my own advice that I gave to folk the 3PV thread. Which is the fault is not in our stars but in ourselves.

Searchable Notes should be in DEVONthink 3 not Ulysses which I should be using for current and in progress writing and should have very little in it. I like Ulysses for writing but I find it is very inflexible and ‘proprietary’ in a way DEVONthink 3 isn’t. I am devising a prefix system for naming notes and dealing with this at that level. It would be nice to get DEVONsphere working though. I like it. Also at present it is showing everything in DEVONthink 3 twice as far as I can see. Soon I am buying a new Mac, this one is in need frankly of a nuke and pave, this is now 7 years of tranferred OSX. Here is what the search for a sheet that was in Ulysses looks like. No Ulysses but double copies of relevant DEVONthink 3 docs. There are a large number of relevant files that came up, none in Ulysses where several should have. I don’t want to consume too much of your time. Like I said I will soon be starting a new Mac. Maybe a couple of months. 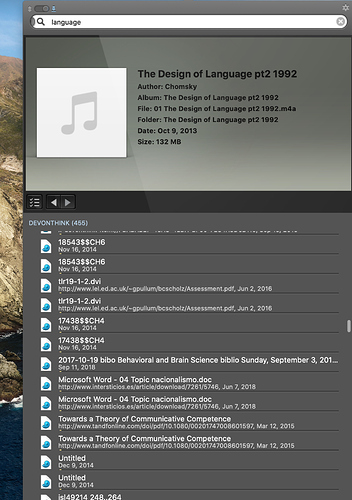 I can’t remember if you had used DEVONthink 2.x with these databases previously.

Well yes and no. I had a lot of this on DT2 but I remade the databases on DEVONthink 3. I might have used the same name again by mistake sometime though. Are you thinking the old databases are still there somewhere? I can’t see them anywhere but that doesn’t mean anything. I had a zipfile copy in Documents too recently which I moved to a thumb drive. Everything is backed up on backblaze and two hard drives via time machine and I am guilty of over kill.

I am wondering if you are getting hits from Spotlight metadata for DEVONthink 2 an DEVONthink 3, which would both be present on the machine.

I got you. I won’t worry about that so much, when I get the new Mac I will start it from scratch. Now I know what it is, it doesn’t bother me. Thanks you are right I checked and a document I added yesterday only showed up once. One part of the issue solved. I am not sure now if I need Ulysses to show on DS. However it might as well be able to see Ulysses? Any ideas? I am not going to sweat this unless it happens on the new Mac though. Then I would like it to work even if I don’t use it much. You never know, sometimes things show up you didn’t realize. That is the point of the app really? Thanks yet again 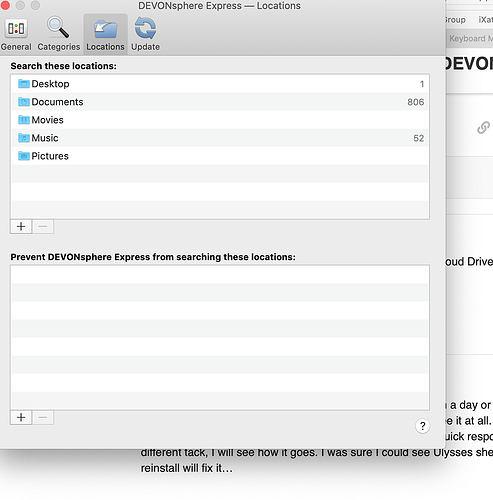 I don’t see a location for the Ulysses documents in your Locations.

This was the best I could do and it doesn’t show any Ulysses files in DEVON sphere. 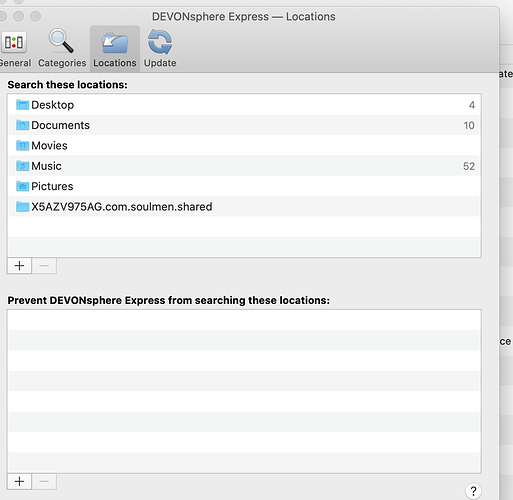 Can you find the Ulysses files with a normal Spotlight search in the Finder?

I keep trying. Here is a screenshot of the Ulysses file in Locations to search. It updates as I would expect if I add a sheet to Ulysses, in other words I added a sheet today and the number went from 119 to 120 on that panel on the right.

However nothing shows on a search for a term. I tested it with terms I think should show. I show you how I have the ‘Categories’ set too. Did I do that wrong? 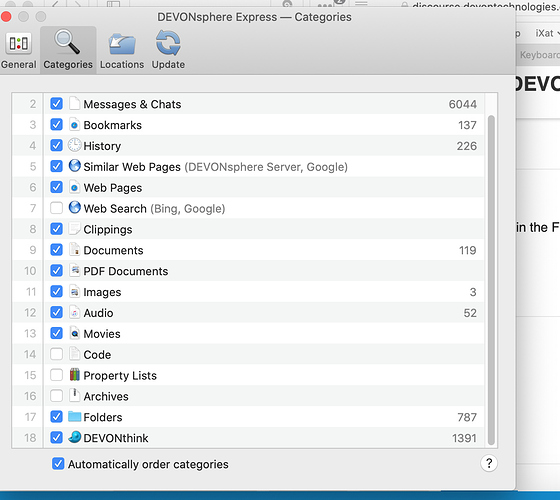 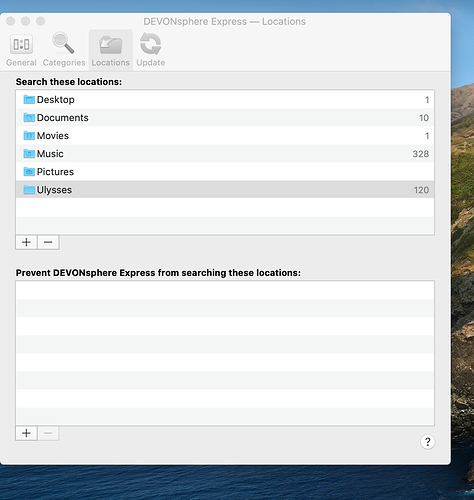 No those things appear fine.
The Ulysses format is not merely a Markdown document, IIRC. (I don’t use the app myself.)
It could be DEVONsphere isn’t using the Ulysses mdimporter.

Thanks again! I will ask the Ulysses people then and/or look for the mdimporter. I am above my knowledge really now? Thanks though. Anyway if those screenshots look right I know to look for something else!

Thing is really that I am sure it was working ok when I first installed DEVONsphere. That is what is bugging me. Showed the little icons right as well.

Could you please send a file that isn’t indexed to cgrunenberg - at - devon-technologies.com? In addition, which version of Ulysses is installed on your computer and in which folder?

I will: thanks for picking this up. I will need a few spare minutes to do this. In advance I am on Version 18.5 (53991) and, as far as I understand it is in Applications folder. I looked at the Package there and the mdimporter is there. I am beyond anything I really understand now though. I did move my sheets from iCloud to the Mac at some point recently. For various reasons. I feel that around that time I had some glitches I must tell you. Otherwise I will do what you ask and go now to email.