Can't get "Bates Numbering" to work

I am new to DEVONthink and currently using the trial version. I am having trouble with Apply Rules > Bates Numbering. It doesn’t do anything when I try to run it.

I create a testing database called demo. I then import a few files into that database > select all the items and run “Apply Rules” > “Bates Numbering”. I would expect the files to be renamed to demo-#BATES-originalfilename.extension.

Am I missing something? Why isn’t it working?

Double-click the smart rule. What does it show?

(I have increased your forum trust level so you should be able to post a screen capture.) 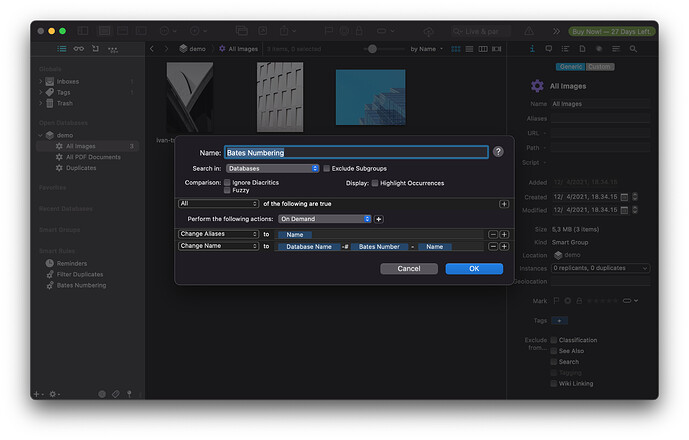 There is no condition in your rule, which is why it does not work. Click the + adjacent to all of the following are true and add a condition, such as kind is any document.

And I would be more specific about the target database and the kind of file(s) or you could number every file you have!

I just thought that the default rule from DEVONthink would actually work without modification. I don’t know why they ship it with DEVONthink then to be honest.

The more classic response might be thank you; but I’ll happily philosophise on the reasons DT had for not providing the user with a “ready rule”; which condition would it have been ideal for DT to use? Image they used Kind is any document - the forum would be full of users asking how they could undo the thousands of changes they had just invoked. But if the rule read Name is very special document it simply wouldn’t work for most users, as they won’t happen to have a document with that name. So I guess the decision was taken to provide a rule which is ready to be tailored by the user. I’ll happily admit that if you’ve just taken up DT3 and haven’t yet set up any of your own smart rules you could easily miss why this one doesn’t work out of the box; ideally the rule would have a comment field which could be prepopulated with appropriate instructions. Perhaps the handbook even mentions the need to add a condition to the rule - I don’t know, I haven’t looked.

It’s actually worth getting into the nitty-gritty with this rule - as is stands it would be useless in my opinion: it would happily change the name of a document which already had a bates number, simply adding another on to the name next time it was run. So I’d guess it’s more of a proof of concept thing - you’d want to exclude files already numbered from the rule - in the simplest setting by excluding any file with -# in its name, or in a more complex setting by e.g. adding the bates number to custom metadata and excluding any file with a number greater 0 in the appropriate metadata field.

So, back to reasons: who knows? DT is “infinitely” customisable - for me that is a major part of its attraction. Go customise and get what you want from it

When you get stuck, come back here for more brains waves & philosophy

When I first was moving from EN to DT3 I was just trying things willy-nilly. I tried the Bates rule which didn’t do anything and prompted me to read up on smart rules–if it worked and had changed everything…