I know I can Export my PDF from Safari to a folder and then import the folder into DT.

I tried clipping using the webclipper however the best I can get is one page.

I tried clipping using the webclipper however the best I can get is one page.

Which format did you actually use? One page or paginated?

I tried both formats. One page got me half a page and paginated got a full page,

Did you use exactly these URLs for clipping? Then DEVONthink should store the original PDF document actually, no matter whether the format was single-page or paginated PDF.

I did use these urls, as an example I get this: 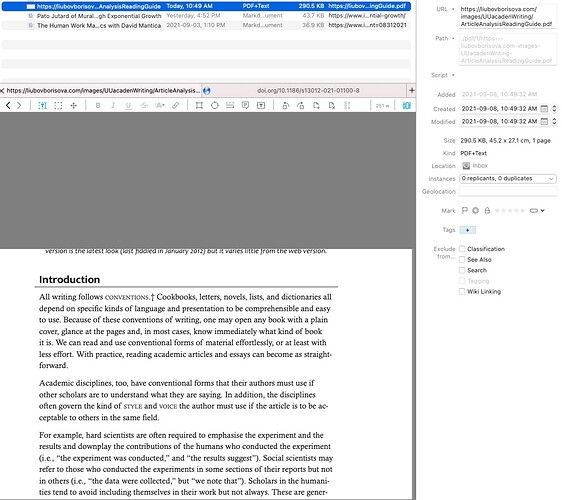 As you see from the metadata - its one page and 295KB.

What operating system are you running?

Yes I have restarted DevonThink a couple of times in this game.

@cgrunenberg :The only thing unusual I see is the name is the full URL. Otherwise, I clipped both URLs as paginated PDFs with no issue.

I restarted Safari and DevonThink just in case together were the problem. No luck.

Then - I clipped to Markdown just to see what would happen. A miracle - clipping to Markdown saved a PDF+text. This is beginning to feel like quantum physics - spooky and strange. It is however missing truth and beauty.

I believe it’s up and charmed though.

I had to double check (sorry). Strange and Charmed are a pair. Top/Bottom are another, however I prefer Truth and Beauty - even if those names fell out of favour.

Just taking a little poetic license with the flavors

You can make a favourite folder in Finder, like “Save to DT”, and attach the script below to this folder.

It will import any file to current DT group.

This looks very useful. Please forgive my ignorance with the next step.

I can read the code and I’m assuming its applescript. How do I attach the Script to a folder?

Don’t forget to place this folder in Finder’s sidebar favourites, to see it in every system Save dialog

For someone who like me finds themselves fighting their Mac - How to make your Library folder visible in the Finder in OS X 10.9 (Mavericks) or later - IS&T Contributions - Hermes will help you make the finder visible.

Hint View Options is your friend.

))) Sorry, I thought you know this…
I use Path Finder for long time, so I’ve forgotten all these Finder strange limitations

[Odd tried to reply by email and it never arrived]

Strangely, I use Pathfinder as well. It too needs the view option set to make the library folder visible.

Between DT, Hazel, Pathfinder, Keyboard Maestro and TheBrain I wonder if I’m making my world massively over complicated. All I’m missing is BetterTouchTool to complete the madness.

Try Multitouch instead of BTT, I personally found it more useful and simple.
For Path Finder just add this icon to the toolbar:

Clicking it will make all hidden items visible in current folder