Microsoft are changing the default behaviour of OneDrive on macOS; this change will result in files stored in OneDrive not being available locally by default. Anyone indexing files on OneDrive will presumably run into trouble when that happens; indexing requires files to be persistently present at a local path.

Microsoft have described the changes in detail here. It will be possible to pin files such that they remain available locally, but that will require user interaction.

In my opinion, anybody indexing files on OneDrive should be aware that there is at least a theoretical potential for data loss when the change is enacted.

@cgrunenberg do you share this concern? On first thoughts about this, I have two specific concerns:

Both of these effects could cause loss of data (I assume; I’m basing that assumption on my interpretation of the workings of sync). In the case of OneDrive, users might very well not be aware of the impending changes. Would it be worth adding a message to the next maintenance release?

The good news is that it does appear you can pin a whole folder–so for my workflow, it shouldn’t impact much–but this sounds like a potential nightmare…

In my opinion, anybody indexing files on OneDrive should be aware that there is at least a theoretical potential for data loss when the change is enacted. @cgrunenberg do you share this concern?

At least so far it sounds indeed like a possible problem.

Wow! Sounds like an extraordinarily bad idea, especially to force on users.

Yeah, kinda interesting. I’ve not actually read anybody in the forum indexing OneDrive, so I guess it’s either uncommon or very reliable to date.

I know some people are using OneDrive-indexed data, just not specific names off the top of my head. I’m anticipating some fear and furor to come

Me too - do we have the option of warning users? So a blog post, a pinned thread, a pop up in the next maintenance release (ideally only popping up for those using OneDrive)? Or am I exaggerating the impact this could have? Or more to the point: pls will you discuss internally whether any measures are required and practicable, and what the appropriate point in time might be?

It’s actually less of an issue than it used to be as there are now some mechanisms in place for dealing with broken indexed paths. However, yes we will discuss this internally.

Just want to add here that I had a database that indexed a OneDrive folder (with many many subfolders) that had been created before this change occurred on Microsoft’s side. I “pinned” the folder, but the database was unable to figure out what to do. I ended up deleting that database and creating a new one, this time indexing the OneDrive folder that had already been “pinned”, and now everything works perfectly. It was a relatively painless way to fix the problem.

Hope that’s useful to someone.

Not directly related to DEVONthink, but I have massive problems with those OneDrive changes.

I have the Family subscription with 6TB for 6 accounts.

As Sync Location I selected an external Thunderbolt drive with APFS.

After doping so anmd downloading the first some hundred GB, I logged out and only later logged in again.

At that moment, I could not activate OneDrive anymore: 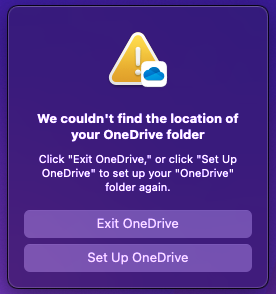 Without any other idea, I used “Set Up OneDrive” which requireded to login again.

Then, I should select the Sync Location and of course I tried my existing directory.
But: 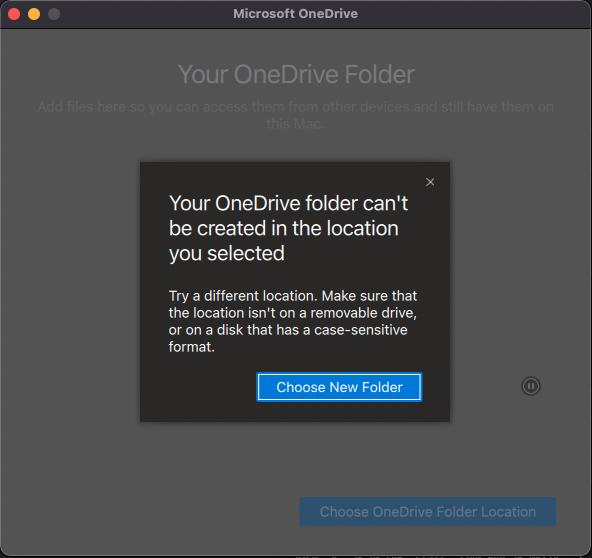 I simply could not select the same folder again!

Out of ideas, I checked the Sync and Cache Locations:

You can see, that within my selected folder on the external drive, there is the new SymLink that points to the real Sync Location below ~/Library/CloudStorage/OneDrive-Personal

But when pinned, the real content should be below the hidden folder .ODContainer-OneDrive in the folder I selected - this is the new Cache Location and should allow to store the pinned content to external drives.

Sad thing is, it does not seem to work.

I tried several times, uploading and downloading lots of stuff and finally gave up - for now.

I later also tried to remove the SymLink, hoping that this allows the folder to be selected, but as you can see, this created a new OneDrive directory instead of a SymLink.

My primary OneDrive account is not affected by this, as it could - for some reason - not be upgraded to the “new experience”, which is great for now. 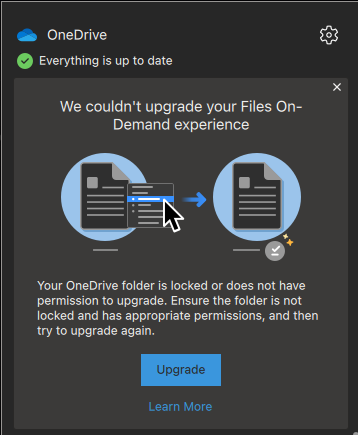 Hopefully they will not destroy something later.

I am creating new backups from this, to be sure.

And yes, this is related to DT, as on this OneDrive I also store by Cryptomator Volume which in turn get’s indexed by DT and synced to remove locations.

Ugh! Thanks for sharing this experience. Hopefully it will not be a common occurrence for others but this may prove useful to assist someone it affects.