Apologies if this has already been covered, but I can’t find a post on it that’s recent using the search function for the forum.

Is there a Web Clipper Chrome Extension for DT 3? I have one for Safari, but can’t locate one for Chrome.

I’m sure it’s me, but I am still getting to grips with the old DT, let alone the new one, the new forum, and the new website…

You should be able to install it via DEVONthink 3 > Install Add-Ons… which will open the extensions’s URL in Chrome.

I tried that, but the URL links to the Pro Office (DT2) version of the extension. 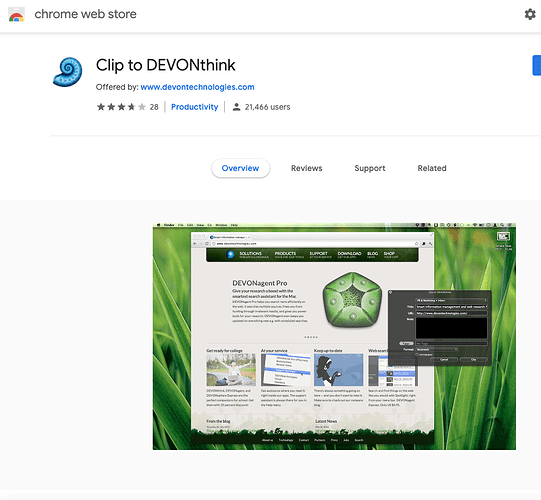 I have a related issue.

I’ve installed DT3 to play around with it, created a test db, all very good. What a great app! I’ll wait until it is out of beta until I trust my full research workflow to the app, however.

So – I still run DTpro 2 Office for daily work. Since installing the beta, the web clipper in Safari now clips to DT 3, which is not what I want. In DT3, the check-box for the Safari clipper in not checked. In Chrome, things work correctly: the clipper clips to DT 2.

Is it possible to redirect the Safari clipper to DT 2 even while DT 3 has been installed? Is this a glitch or something I can remedy? I don’t really want to switch browser unless I have to.

When I installed the Safari Clipper, I found I could have both on my toolbar at once. The icons looked the same, so I suppose you’d need to be sure you knew which one was which, but just go to Safari>Preferences>Extensions and tick whichever ones you need. I have unticked DT2 (Pro Office) and ticked DT3. I should just say I haven’t USED both at once, but it seems to me it should work as it opens a separate application. 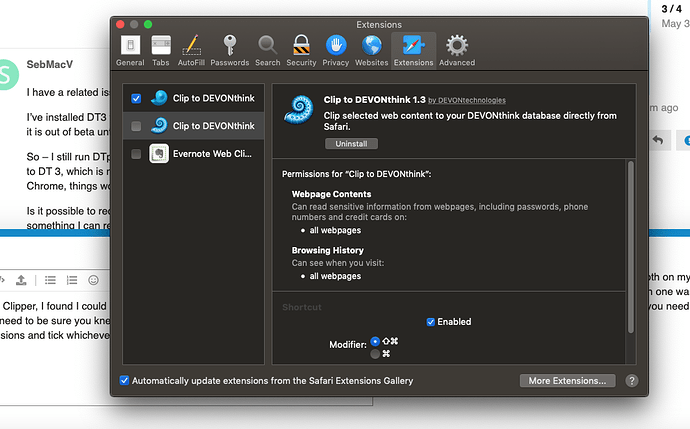 Installation of multiple versions/editions of DEVONthink on the same user account isn’t recommended, e.g. macOS might use one or the other app for cross-links, browser extensions or scripts. One workaround is to install e.g. version 3 only on a second macOS user account for testing.

I tried that, but the URL links to the Pro Office (DT2) version of the extension.

It’s compatible to version 3, only the icon is outdated.

Okay – thanks. I had in fact found that DT 3 shows in the sidebar the folders which I’d favourited in DT 2 Pro Office (even though these folders don’t exist in the test db which I’d created), so there must be some settings shared.

I’ll uninstall DT 3 for now and see if I can fix it that way.

Yes, I can certainly understand that – I only have DT3 installed. Thanks for your reply on the Chrome Extension, but has anyone any ideas how to get the DT3 extension, given the Install Add-Ons in DT3 links to a DT2 Pro Office Extension?

but has anyone any ideas how to get the DT3 extension, given the Install Add-Ons in DT3 links to a DT2 Pro Office Extension?

Both versions use the same extension, the extension just needs an update of the icon.

Sorry, I missed your reply earlier. In fact it doesn’t. The extension tries to open DT2 Pro Office rather than clipping to DT 3 which is running on my Mac and open. Attached screenshot shows the Extension icon and what happens when I click on it.

Could it be that I need to uninstall DT2 Pro Office in order for it to clip to DT3? The DT2 Pro Office app is not open on my Mac right now, but it’s trying to open it when I clip…

See above, it’s undefined which version will be launched by macOS. Uninstalling one version or using version 3 only in a dedicated macOS user account for testing should fix this.

Yes, I was wrong. When I click on ‘Open DEVONthink Pro Office’ it simply defaults to DT3. Interestingly, there’s the DEVONthink option in the Menu Bar at the top which has the same effect.

Thank you and apologies for misunderstanding.

And, by the way, it’s a quite fantastic update. Thank you for the excellent Dark Mode, the new (and much improved) layout options (especially the Inspectors), and for both the improved user interface and the ‘under the bonnet’ improvements I have yet to appreciate.

Thanks for the nice feedback

Not sure if the bookmarklets will solve your issue, but it helped me.
More:

Following up - I solved the issue by using the DT bookmarklets for Chrome, instead of the clipper extension. There’s one that prompts with the popup (where to save, tags etc), and one that bypasses it, silently saving. The app comes into focus for the latter, but at least it’s doesn’t require action. I’m not sure how to find the bookmarklets on the DT website again though. Maybe someone else can chime in PS. I did notice that some websites dont save well… I dont mean one’s that are single pa…