I am trying to clip the following Reddit post to DEVONthink. However, the clipper keeps giving me a blank PDF document or a Web Archive that is less than 4KB. (Edit: the problem happens if I click on “View Entire Discussions” to expand all comments, THEN clip to DEVONthink.)

r/vancouver - Yes, you should boycott Babylon by Telus Health 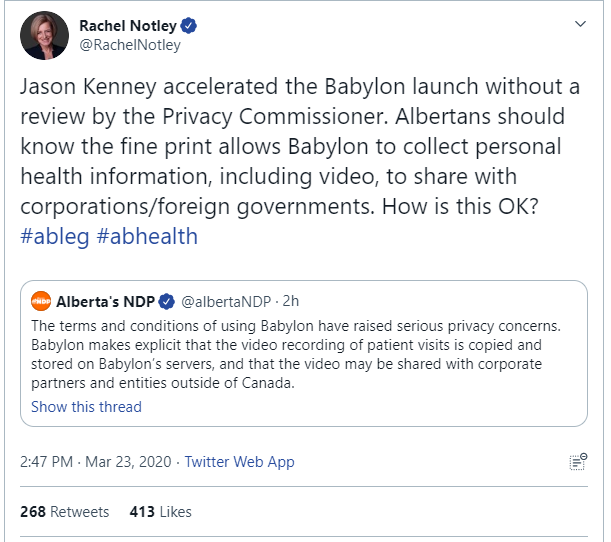 
Is it just me? Can someone try to clip this Reddit post (After clicking on “View Entire Discussions”) as PDF or Web Archive and see if you are seeing the same behavior?

Which version of macOS do you use, does it work after rebooting the computer? A single page PDF using the clutter-free option works fine over here: 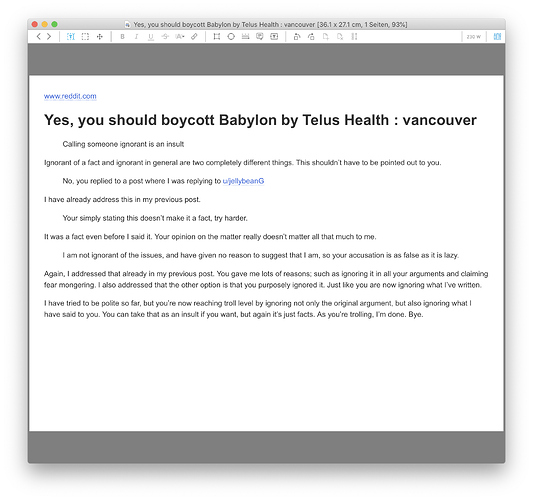 Looks like rebooting fixed the problem. Will try that first next time before posting in the forum.

PS: on top of that, do you mind to tell me how does “HTML Page” clipped by DEVONthink being rendered? I understand that the clipper takes the HTML code of a site and save it to DEVONthink, but I recently discovered these HTML Pages takes a few minutes to load if I disconnect from internet. DEVONthink To Go on the other hand, loads the page instantly.

Before disconnecting from internet, I thought the HTML Page is a viable alternative to Web Archieve. Now I am not so sure.

HTML can differ the same issues as webarchives.

I understand that sometimes HTML doesn’t display properly. But why is it so slow on the mac while being very fast on iOS? On iOS, the same HTML page will load instantly (while offline) although the content and formatting might be a little off; on macOS, DEVONthink maintains the correct formatting of the page, but opens it up painfully slow.

I understand DEVONthink on these two platforms are not the same product nor under the same code base, but the speed difference of opening a clipped HTML page offline lead me to think this is a bug of the macOS version of DEVONthink.

I understand DEVONthink on these two platforms are not the same product nor under the same code base, but the speed difference of opening a clipped HTML page offline lead me to think this is a bug of the macOS version of DEVONthink.

DEVONthink uses an older, slower but much more powerful API for displaying web pages. Otherwise a lot of things wouldn’t be possible (like on iOS).

Understood, I tried to load the same HTML file from my browsers, Chrome took as long as DEVONthink, and Safari just didn’t open it at all.

Is there a program that you can recommend for opening the HTML page as fast as DEVONthink on iOS? I don’t mind to code something myself if I know what framework I should use to make it happen.