A menu command/shortcut that would be really welcome is “close all windows”. This works in many applications (command-option-W) so it’s natural for my fingers to go there in DT3, but no dice.
To work really naturally, I feel the option-command-W shortcut in DT3 should close all document windows, but not listings. So while working with a database, you can open a bunch of files, work on or look at some or all, and then dismiss the lot without losing the database overview window.
Another use case: clumsily opening a dozen windows from a listing and just wanting to undo that asap.

You can already do this yourself.

Correct, and I already do this. It comes really close, but it’s not the same, as I have to think about what shortcut to choose, depending on what workspace I’m in, instead of just going to the system-wide shortcut that says ‘I’m lost, clean this up’. So I still think a ‘close all’ shortcut would be useful. Useful enough for me to have created a 6-line hot-key triggered AppleScript for it, anyway

Another way to implement my suggestion would be for option-command-W to mean: make a clean start with the current workspace.
Thanks for putting up with my nitpicking! I do it because I use DT3 the whole time and it’s so near-perfect

Another way to implement my suggestion would be for option-command-W to mean: make a clean start with the current workspace.

Isn’t that essentially what I just suggested… ? 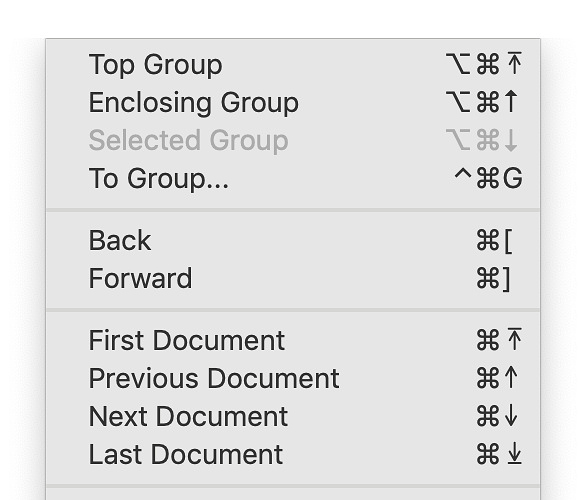 Unless I have missed something: no, because there is no single shortcut to go to ‘the current workspace’, I have to decide myself what the current workspace is and choose the shortcut accordingly, which is less direct.
Also, the shortcut I would normally try to close all document windows in any app, command-option-W, is used by DT3 as… update the current (!) workspace. Hitting it reflexively, but mistakenly, in DT3 has mucked up my workspaces a number of times already.

Another use case I just encountered:
I start up a workspace. I double-click one or two groups, they open in new windows. I open a few documents from them. Then I want to close al the documents to do something else in those group windows (e.g. merging). Going back to the clean workspace forces me to go to those groups again and reopen. A close-all command would do just what I want, and nothing more.
(So I withdraw my suggestion that option-command could mean 'start over with clean workspace…)

command-option-W, is used by DT3 as… update the current (!) workspace.

As I said previously, this can be changed in the Keyboard prefs.

A close-all command would do just what I want, and nothing more.

How would this do what you want?
A Close All window command would do just that… close ALL windows. are you referring to just closing document windows, not main windows??

To work really naturally, I feel the option-command-W shortcut in DT3 should close all document windows, but not listings.

Ahh… different story altogether.
“When is a window, not a window…”, or something like that

Here is a simple script that will do just that…

You can save that in ~/Library/Application Scripts/com.devon-technologies.think3/Menus and add a shortcut for whatever you name the script.

You could also save it to the Toolbar folder, quit and relaunch DEVONthink, and add it as a toolbar button.

It was sort of in the title of the post

It is true that this feature request can be fulfilled by myself, using applescript and attaching a shortcut to it. I am an avid user of Keyboard Maestro. This script is just a tad shorter than the one I’m using, so I’ll happily use it!
The purpose of the feature request was, in this case, to suggest that DT3 would be improved if it had this feature out of the box.
At the very least, I would humbly suggest you not use option-command-W for the purpose you use it for now, as users may well ‘just see if it works like it works everywhere else’ and unwittingly, without being prompted if they’re sure, change their current workspace beyond recognition.

Here the one-liner, so even shorter…