I was getting sync errors and eventually discovered the reason was my CloudMe storage was full. I have deleted a couple of older (small) databases and freed up enough space to continue for now.

I have 8 separate databases, the biggest is 21GB and the smallest 239MB.

I have no other files in CloudMe - it is only used for DEVONthink sync.

One thing is a bit odd - there are two dtCloud folders. One has the identical name as in my Sync location in the DEVONthink Sync pane - i.e. RGD-DEVON.dtCloud and the other is almost the same except for capitalisation - i.e. RGD-Devon.dtCloud

I can’t see the respective sizes of each folder - CloudMe does not seem to be able to display show folder size.

I am assuming it is safe to delete the RGD-Devon.dtCloud folder if it does to match the sync location?

Maybe that has something to do with filling up the storage?

No, I only have RGD-DEVON in the sync pane on all syncing laptops.

DTTG I only use LAN sync.

Then yes, I’d say you can safely remove the other sync location in CloudMe.

Thanks Bluefrog, I did that and freed up about 20GB.

I guess there is no easy way to find and delete files which should not be there as the folder names are all long codes.

I assume somehow spurious files have been uploaded, and are no longer being synced, but are in that RGD-DEVON syncstore location. (There are no other databases showing up in the “Remote” section, so nothing to delete from within DEVONthink)

When you select the sync location in DEVONthink’s Preferences > Sync, do you see other databases in the Remote section of the databases list on the right?

No, nothing showing up there.

Go into the .dtCloud folder in the CloudMe interface online. Do you see more groups than expected there?
I suspect you have old sync data in there.

I have these folders; 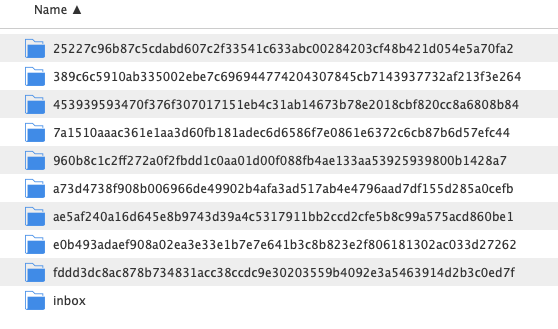 Is that more than expected?

Is it one folder per database?

If so, is there any way to identify which database the folder is related to?

Yes, there is one folder per synced database.

Here is a script that will create a file on your desktop named db.txt. This file will show the name of sync UUID of any open database, so make sure you have open any databases you are syncing.

While it won’t tell you the name of other databases synced to the location, you can identlify ones you are actively syncing.

Unzip the file and double-click to open it in Script Editor. Select Script > Run then check your desktop for the new file.