Combine Move to with UUID to improve workflow

If a user has hundreds or more groups, it would be easier and more precise to enter the group UUID rather than typing the name, and it would allow me to create a keyboard maestro macro to do so.
Indeed, in my case, most moves are to one of about 15 groups in most instances.
Is this possible with the current version ? or via an AppleScript ?
thank you

This is only possibible via AppleScript, the user interface doesn’t use UUIDs and never will. You could add the groups to the favorites though.

I wrote this keyboard maestro macro. It is not as elegant but does the job. 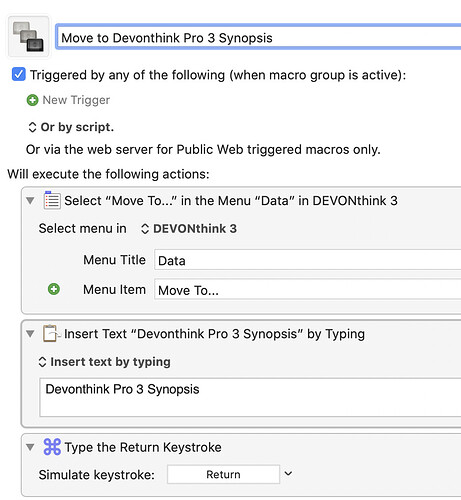 If I understand you correctly, you have “hundreds of groups” and you want to move files to them with single keystrokes defined in KM when a record is selected. Which would mean that you’d have to define “hundreds of keystrokes”, which does not seem very convenient to me.
I suppose that one could script this so that

Seems a bit neater than GUI scripting to me, but that’s a matter of taste. Alternativetly, one can of course define a different keystroke for each group to avoid the pop up menu with the group names.

You could try to set the UUID as Alias and use it instead of the group name.

You are right. I was simplifying of course. I have been using KBM for years and basically one keystroke triggers a “Move to” macro which itself triggers a cascade of “menus” (called palettes or nested palettes) grouped by subject. It’s easy to write such macros and once you are finished, the workflow (is very fast).

also please note in my post above:
Indeed, in my case, most moves are to one of about 15 groups in most instances. (even if I have hundreds of groups).

In addition it is flexible. Some palettes may stay inactive/non visible until tax season for example.

So basically let’s say that I create palettes for 50 groups maximum. It’s very easy and very fast to type through the cascade of menus.

thank you for the suggestion. The macro with cascading nested palettes works fine. I will keep your suggestion in mind for other circumstances where I want to use the UUID.