Continuity Camera from within DEVONthink?

Continuity Camera in iOS12 is really great for quickly scanning documents. In mojave you can rightclick in a lot of places like in the Finder and hit “Import from iPhone”, then “Scan Documents”. This turns the phone into a pretty good scanner and whatever is scanned then magically appears at the import location.

Continuity Camera goes extremely well with DEVONthink and OCR through Abbyy, but currently DT doesn’t have an option to directly use this feature from within the app. As a workaround I am just using it inside the inbox finder folder, but even that is already powerful enough to replace things like Scanbot for most usecases.

Any thoughts about adding support for it?

You already should be able to use it in an RTF file. 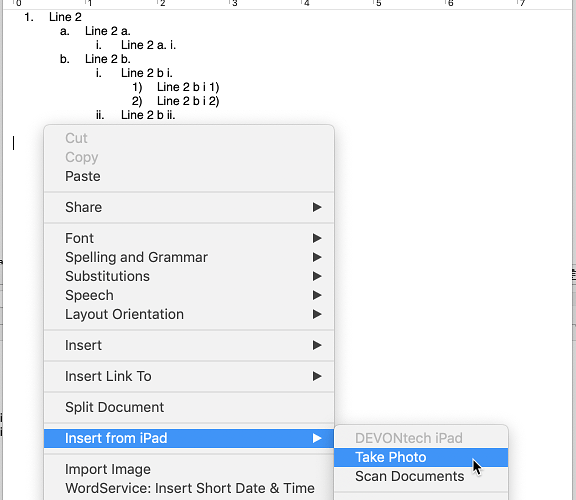 Have you tried this?

Yes, correct! I meant a way to use Continuity Camera to add scanned documents into either inbox or directly into a group

You can of course use continuity camera already now to add documents to folder(s) in Finder that you index in DEVONthink. No need to wait for a new feature.

You can of course use continuity camera already now to add documents to folder(s) in Finder that you index in DEVONthink. No need to wait for a new feature.

Ah yes, that’s exactly what I’m doing now (edited my initial post to make it a bit more clear), just wished it was directly in DT as well

Is it possible ? Likely. But don’t confuse DEVONthink for the Finder. They are not the same thing, so the implementation in the Finder is technologically very different from what happens in DEVONthink.

Is there some way to get continuity camera going with DT?

I can’t get it to add to an existing RTF note even though the contextual menu will operate the Camera app on my iPhone and do a scan or take a shot. Just nothing shows up in DT.

May I bump this thread in light of the latest (DTP v. 3) release.

It would be wonderful to have the wireless “continuity” iOS camera among the Image Capture devices of the Import pane. Currently one needs to use a lightning cable between phone and the Mac for this to happen. Attaching screenshot for clarity.

Has this been implemented yet? I think this could be very useful