I’m not seeing an issue here with importing a file or even adding hashtags to a Markdown document and having them detected automatically. 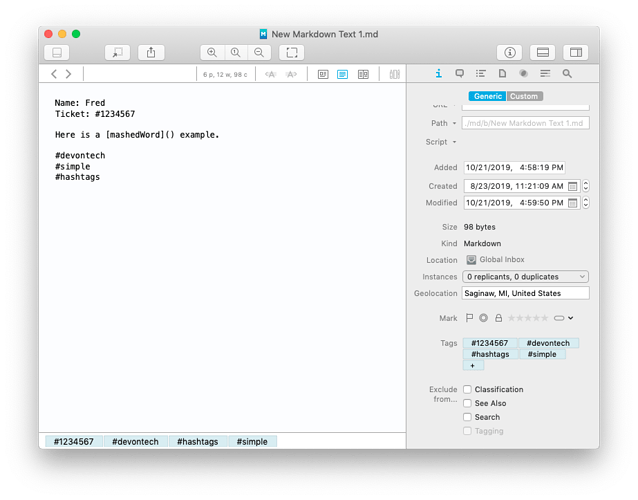 The detected tags are now preserving the # and previously didn’t. I don’t think they should.

It detects the tags and updates the menu (very quickly). All tags are links to view all files under it.

The detected tags are now preserving the # and previously didn’t. I don’t think they should.

The next release will fix this, support underscores and won’t change the case (only if tagging is not case insensitive of course, see File > Database Properties)

down/text file in devonthink, it will replace all tags with whatever tags it finds in the file. I’m no AppleSc

@cgrunenberg is there any reason for convert hashtags to tags not showing up as an option in smart rule creation nor being available as a script in the Devonthink script folder? AFAIK the only way to activate it is importing a file to Devonthink or clicking in a specific menu option.

Also, would it be possible for it to interpret / in order to create nested tags? E.g. Parent Tag/Child Tag.

@cgrunenberg is there any reason for convert hashtags to tags not showing up as an option in smart rule creation nor being available as a script in the Devonthink script folder? AFAIK the only way to activate it is importing a file to Devonthink or clicking in a specific menu option.

The usual reason - too many requests, not enough time

BTW: There’s a smart rule script “Assign Tags” which shows how to use the "extract keywords from … " AppleScript command

Can I wait for this or do I need to find another solution?

Check this box and the tags will get updated. 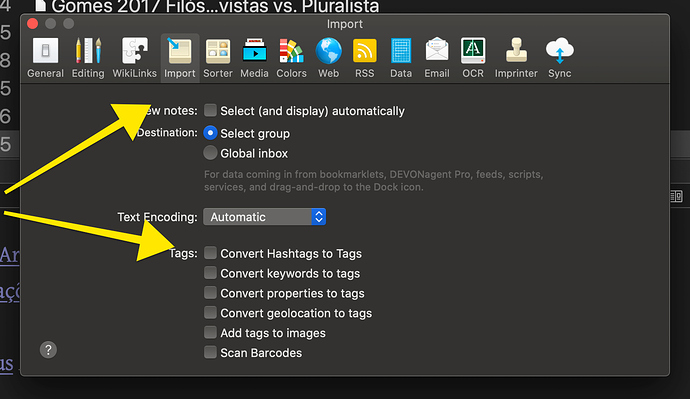 It works fine now (as long as you’ve ticked the box as suggested by Bernado.

Presumably you’re indexing the folder so you can use the external program? It’s what I do with Emacs.

It now doesn’t matter whether you created the indexed document externally or within DT3: as soon as it’s indexed (almost immediately), the #hashtag will be converted to a DT3 (and finder) tag.

If you’re in DT3 in an existing document and you add or edit a #hashtag, and press cmd-s, the changes will appear in DT3’s tag bar. (NB you can’t do it the other way wrong – changes to the DT3 tag aren’t reflected in hashtags.)

If that happens, I just use Data > Tags > Convert Hashtags to Tags.

This of course is working but that should not be the process.
I have to be sure that my documents are synchronized and up to date. You never can be sure if you have to handle it manual in two places.

I just do it manually. Sounds like it could be a good candidate for a hourly smart rule.

Christian in a post above mentions adapting the Tags Assign smart rule script - could you try that?

It would be nice if import or re-index of edited md file took care of the tag conversion – so easy to forget to do the ‘convert hashtags to tags’ command.

Indeed, you are correct. I hadn’t notice this behaviour before.

Hmm, actually I am not good in apple script and don’t want another workaround that I need to develop and maintain myself on two devices.

Just for testing I created a simple rule “after save” for “markdown suffix” that should play a sound …but nothing happens - I’m not optimistic it’ll work with more complex stuff like that without lots of efforts.

Anyway, isn’t this an inconsistence behavior in DT that needs to be fixed ?

I have no issue with this smart rule…

I’ve tried using the Assign Tags script which Christian mentions upthread – the idea being to use it within an hourly smart rule to tidy up any externally changed #hashtags as discussed in this thread.

It works – to a fashion. However, it also pulls in any word which happens to match an existing tag anywhere in the database.

E.g. create a new file with the title New Markdown and in the text write #test1 and #test2. The script picks up #test1 and #test2 and makes tags out of it, but it also picks up the word Markdown in the title and adds that as as a tag (because I already have a tag called ‘markdown’).

but then it doesn’t pick up anything at all.

The original script is:

How do I amend it to work the same way as the Data > Tags > Convert Hashtags to Tags menu command?

I don’t see any issue removing the existing tags from that line. 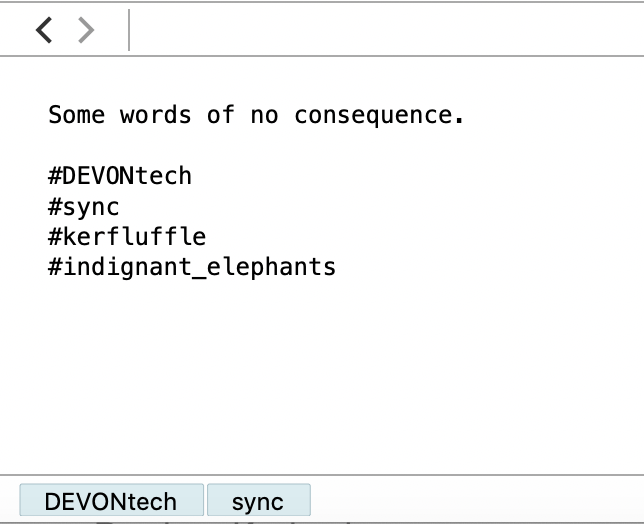 After applying the rule… 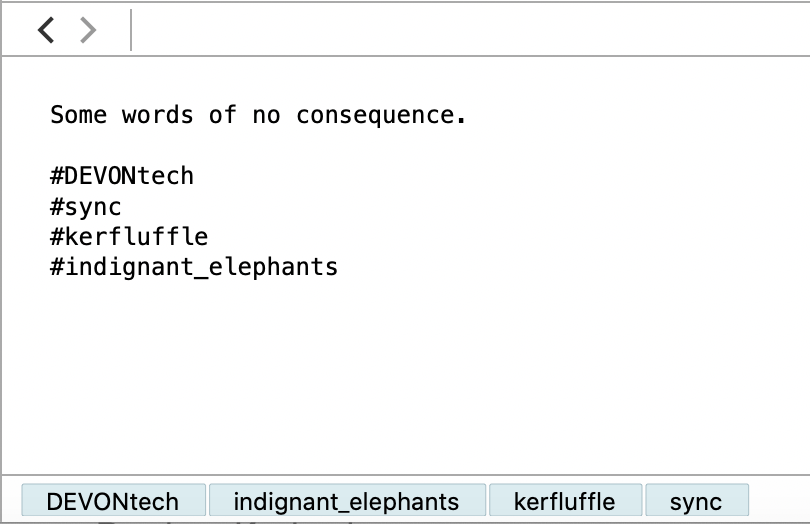 I made exactly the change you did and it didn’t work – nothing happened to the DT tags when I deleted them and tried to recreate them with the script.

Then I read your post and it did work ten times on the run – except for the couple of times in the middle when it didn’t. I really can’t discover what the difference is between those times, unless it was that I ran the rule immediately after deleting the tags for the ones that didn’t work and waited a few seconds longer on the others…

Oh well, another mystery… I’ll use this and run the occasional cmd-a data>tags>convert when I remember.

Thanks again for your help!