Convert Markdown to PDF on DTTG

Thanks for the latest updates to markdown in DTTG, I am enjoying transcluding images and ran into a situation where I needed to share my rendered file as a pdf. I tried print, convert, manually convert to html etc… In the end I had to wait until I was back at home and at my Mac to press the convert to pdf button, is this feature not available on iOS or am I missing something?

Did you tried Print, then swipe to expand the preview and then use the share button to directly send to DTTG? It works for me.

I can’t get .md files to even open. Files of 12kb won’t download. Other items in the database open so I know it’s not a sync issue.

DEVONthink to Go will soon be flushed from my devices. Too many promises and claims, too many issues.

I did try print, pinch to expand and share to DTTG but the images are not included in the final pdf.

I am trying to convert a Markdown file including transcluded images created in DTTG into a PDF file.

At the end of step 2 the markdown file is perfect, images are rendered in the preview and i want to make a pdf of this.

In step 3 the images are not shown in the print preview.

And obviously in step 4 the images are not there either.

I have tried png, jpg, html, markdown, send to browser and other apps. is it possible to convert a Markdown file to PDF file and include the transcluded images?

No this is currently not possible in DEVONthink To Go. We will have to look at the feasibility of converting Markdown to PDF.

PS: Not to be pedantic but those technically are not transcluded images. They’re merely linked.

Ok thanks for your reply @BLUEFROG at least i know now to stop trying to fit a round peg in a square hole.

Not at all pedantic. i’ve transcluded linked to a couple of images from the release notes.

ps. what is meant by transclusion in DEVONthink To Go?

Transclusion of images was added merely because Obsidian uses the syntax and some DEVONthink users were accustomed to the syntax. (And note, we are not attempting to support all the alternative Markdown syntaxes people may want us to.)

Practically speaking, there is absolutely no difference between a linked and a transcluded image and I would suggest you stick the the common Markdown syntax: ![alt text](link to image). 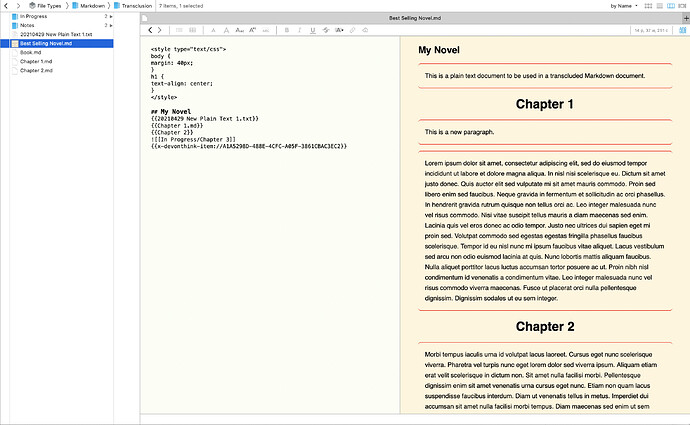 This also works in DEVONthink To Go but there is a minor issue of MultiMarkdown metadata headers not being ignored in the transclusion document. 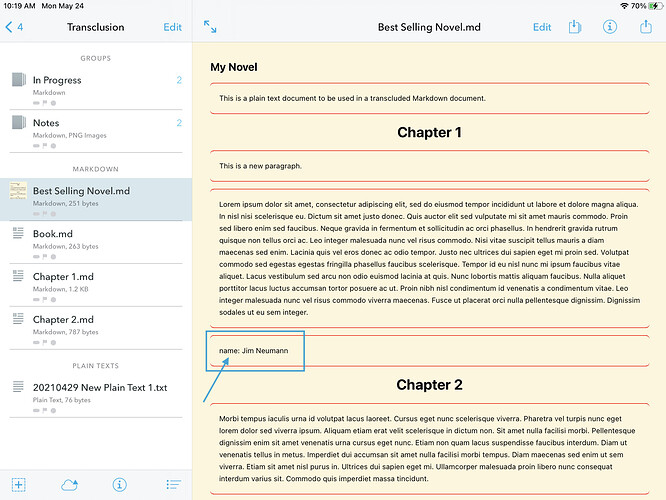 An issue has been filed on this. Thanks for your patience and understanding.

Got it. Thanks for taking the time to explain and with examples. Very much appreciated.

Can you explain why DTTG, on both my iPhone and iPad, can’t even open Markdown files?

Not without more information.