This script is more proof of concept than final product.

Select an RTF or RTFD (i.e., an RTFD with images) document in DEVONthink and run the script. It will create a note in Apple Notes (Sierra was tested). The note will contain images, if any, as embedded in the Note.

The note is created from the “source” of the DEVONthink record, which is an HTML version kept by DEVONthink in the database. In Notes, the body text of notes is HTML. Any images present in the RTFD in DEVONthink are converted to binary and inserted into the HTML.

Apple Notes under Sierra has an odd behavior when a script creates an HTML-based note with embedded images: the images don’t appear right away. It seems that quitting Notes, waiting a second then launching it again will soon make the images appear inside the notes. I cannot explain this at this time. Just be a little patient and your notes will be made whole by whatever processing Notes is doing in the background. The problem does not occur with RTF originals – documents that did not contain images.

The script is mainly code from Sal Soghoian’s MacOSXautomation.com site, with a DEVONthink wrapper. Sal lead AppleScript and other automation tool development at Apple for years, and so if anyone knows about Notes, he knows.

Thanks for the script korm, could be most useful. I get an error message when trying to compile it—see attachment. 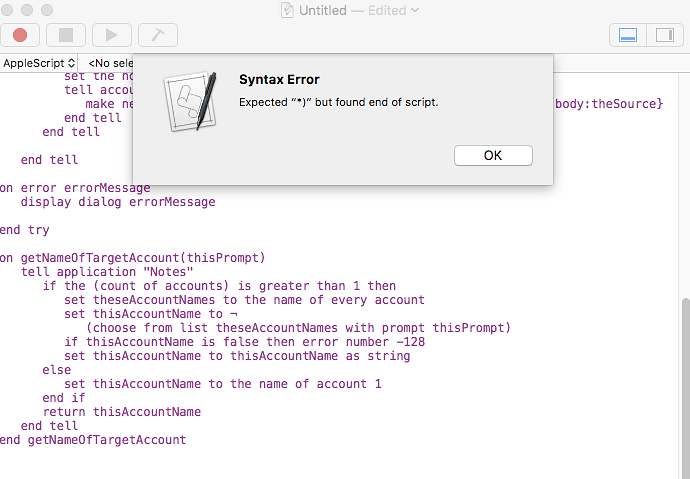 It’s fixed, now, in the original note above. Copy from there.

It’s fixed, now, in the original note above. Copy from there.

Thanks korm for quick fix