Corrupted PDF files on ipad but not iphone UPDATE: Fixed!

Sitting in conference right now. Group with conference material is set to always download on both iPhone and iPad. iPhone files (pdf format) open perfectly. iPad files either won’t download (I click and spinning wheel pops up then disappears and screen with option to download pops up again) or it downloads and reads as a corrupted PDF. Any thoughts?

Searched forums for Corrupted PDF and couldn’t find a solution. Sorry if its already been posted.

Is there still enough disk space available on the iPad?

I go to download PDF and it comes back corrupted.

reads as a corrupted PDF

Could you post a screencapture of what you’re seeing?

Here it is, seeing same thing on iPad and iPhone 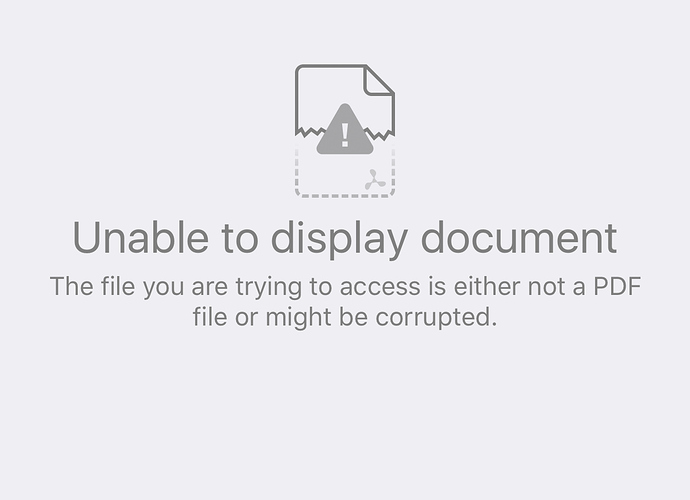 Strange thing is that search is picking up the contents of the PDF and other notes.

I deleted app on iPad and downloaded and did sync and still same issue.

I was able to pull down a couple screenshots I had in database but still a no go on PDF’s.

Where are they Syncing from?

Edit: No, I wasn’t using it on the Mac at the time issues occurred.
Yes, files are indexed, however, I have files not indexed showing same behavior
Databases are located in folder located in user account, databases not synced by iCloud drive

I found a post from BLUEFROG which may explain some of these issues.

I indexed files into DTPO on Mac while at home. I then, on my iPhone, set that particular folder to always download, while at home. Apparently this allowed those indexed files to be downloaded to my device since I was on same network. While at conference, I attempted to download files to my iPad. At the time, I assumed that since they were downloaded on my iPhone, which I had done while at home on same network, then I should be able to download on my iPad.

So, to clear this up, would the above posted screen shot appear if I had attempted to download a file on my mobile device when said file was only indexed in my DTPO database?

My concern is that this may be indicative of an issue with my database or sync store since it would appear that when I attempt to download the file, DTTG is finding a file to download but sees that its corrupted. Its also concerning that some PDF files still won’t download to DTTG even though they are imported into DTPO. I can get a thumbnail but full PDF still won’t download.

Okay, so I deleted apps off of iPhone and iPad, deleted sync store.
I rebuilt database and then set up new sync store.
Everything running perfectly again.
I believe that when setting up my new Mac, I must have screwed something up.

That sounds like a perfectly reasonable thing to do IMHO.
I hope all remains well.