Like others, DT crashed and I lost a lot of work.
I understand that for now it doesn’t have an autosave feature.

But Bill_DeVille said this in another thread:

“Yes and no. If you are editing a rich text file and then select another document in a view window, your changes will be automatically saved.”

I changed windows before the crash but DT still opens the file from much earlier than that. Are the files stores elsewhere?
Also I took a look at the backup it does but it’s only metadata, aren’t there any text files in there?

While I agree that an autosave option might not be the best thing for everyone, I think what DT should at least do is something like Textedit does now: it does not autosave your document but keeps a copy of a current unsaved version somewhere and in case of a crash, it will be able to restore this file next time the application is launched.

I agree. DEVONthink should be a modern application and use Lion autosave and save-a-version features for documents that are editable inside DEVONthink - .txt, sheets, PDF annotation, .html, etc.

Edit changes will be saved if one selects a different document in the same view. That’s not the same as switching to a different window, which doesn’t trigger save.

For Autosave, I set up a background action with KeyboardMaestro. 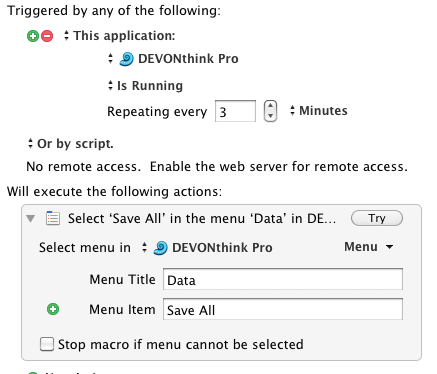 Thanks for your feedback.
Windjung, this seems like an interesting solution. I’ll check it out. There was also the foreversave solution.

But Bill_DeVille, I can understand an autosave feature might not be desired by everyone (myself included since I’m syncing my database on dropbox), wouldn’t you think that implementing a feature like Textedit where it keeps a copy of a current unsaved document somewhere else in case of a crash or power failure would be a great thing to have?

It wouldn’t autosave and write changes constantly, it wouldn’t save a document we don’t necessarily want to save, it would only keep a backup data of those unsaved documents outside our databases. (faster read/write)

doesn’t that make sense?
yes, no?

I’m not sure why you would NOT want to save a document in progress – I lost some work (not much, thank goodness) because the computer rebooted for no reason while DEVONthink was open, and I hadn’t saved it, just days ago. I keep my .dtBase2 files in an encrypted disk image file, and miraculously nothing else was lost. I was going to ask for an autosave feature, thinking no one ever thought of it before

Obviously autosave should be an option, but if the Lion/MountainLion versioning feature is used, then even those of you who don’t want a document autosaved will be able to recover an older version.

I take the crude step of exporting my document after I save it - a habit I got into from the days that DEVONthink stored everything in a database instead of files. That was after a disastrous loss of data - I don’t even like to think about it.