I am using Tinderbox to output a bunch of HTML files that I then store in DevonThink. Folder structure looks like this:

Everything looks good with the HTML files when viewing locally on Safari. However, the CSS doesn’t seem to be used to render the pages when viewed in DevonThink. Is this use supported? Should I instead embed the CSS in the HTML as “style” tags? Some other method of linking CSS and HTML files?

A screen capture of the group structure in DEVONthink and the View > Document Display > Source code, showing the head would be useful. 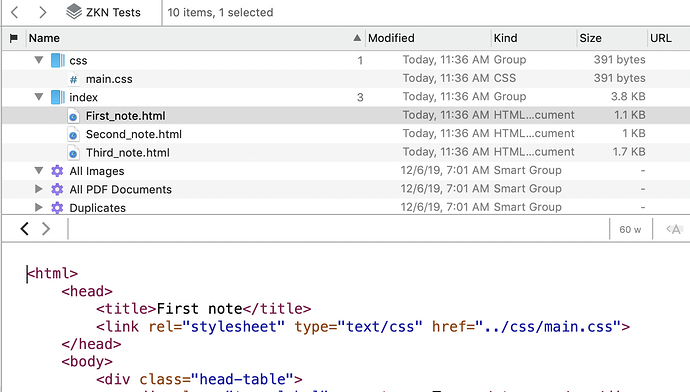 That’s what I figured.

The ../ is not valid in DEVONthink as a document could have multiple parents.

Hmm. Ok. I’m not familiar with all the ins and outs of relative links in HTML. Is there a way to link from “first_note.html” to “main.css”?

Since this is showing the CSS in a group at the root of the ZKN Tests database, it would be /css/main.css.

You could also use the item link, available from the contextual menu.

Also, it might make sense to have these be disabled by default on plain text files? I know I like smart quotes in rich text but they tend to cause problems in plain text.

People use plain text for all manner of things - not just code handling. (And some are incredible sticklers for using proper typographer’s quotes.) This is why it’s a preference to enable or disable, as people see fit.