I have two databases set up for synching, in addition to the inbox. Everything was working fine for a while, but for the last couple of days one of them has stopped synching (to DT To Go, I mean — all is well at the Mac end). It records a synch as having been completed, but it doesn’t actually synch. I changed some file names in DT on the Mac, added some files, moved some others. None of it shows up in DTTG.
I have no idea what could have caused it. It used to happen with an earlier version of DTTG which is why I gave up on it. The problem seemed to have been fixed but now here we are again.

Is a verification of the sync store (see contextual menu in Preferences > Sync) successful?

Hmm. Not sure what to make of that. Do you mean on my Mac? Which contextual menu? The one that says “verify database quickly”?
Anyway, here’s what the list of databases looks like on my iPad: 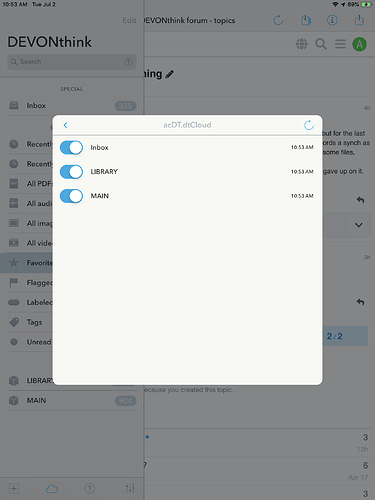 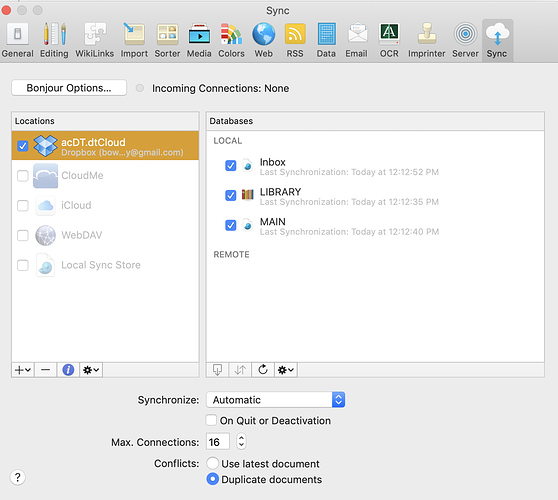 The database in question is called “Main.” (Although it’s half the size of “Library.”) You can see that on both ends it is declared to have been synchronized. But it hasn’t been!

Incidentally, having initiated the “very quick verification” on the “Main” database via the contextual menu, I can report it is still at work on it (the rotating “in process” signal is still rotating). Is this different from the usual “Verification and Repair” process?

The “very quick verification” process I mentioned in the previous post. However, my database still won’t synch at the DTTG end.

Is there a triangle on the sync icon in the bottom toolbar of DEVONthink To Go?

No. As I say, it seems to think it is synching properly. But it simply isn’t, and hasn’t for a couple of days.

This is likely a rare and sporadic Dropbox issue we can’t reproduce. Hold the Option key and choose Help > Report bug to start a support ticket.