database icons in DEVONthink To Go

When I set database icons on my Mac using the Finder (ie. Option-Command-i on the X.dtBase2 package, then paste in the icon), they are displayed everywhere in DEVONthink Pro Office - in the sidebar, in database properties, in Preferences:Sync, etc.

However, these database icons don’t show up at all on DEVONthink To Go.

Is there some way to set database icons so that they are also displayed by DEVONthink To Go?

The database icons on the Mac are simply the database package‘s file icon as set ion the Finder. Unlike group and document icons they‘re not part of the database structure and are not synchronized we‘re afraid.

Would it be possible to sync those icons or is it technically impossible?

I too have multiple databases with distinct macOS icons and I live by it. It helps me get orientation. When I view the main screen of DEVONthink To Go, every database has a gray cube icon which looks depressing.

This fact is compounded by the display of the blue-gray oval dots at the right side which show a white number inside of them. How about displaying those numbers more “naked” like they do in the Things app or Gmail? Then, not only it would it be more refreshing to look at the main page but additionally it would be easier to actually read those numbers.

Maybe you just need to get outside in the sunshine more often.

Would it be possible to sync those icons or is it technically impossible?

It’s technically possible, of course, but currently the database icon is not part of the sync data stream. We might add it to a future version of sync on both sides of the OS rift.

I’m using DEVONthink To Go on my iPad in horizontal mode.

What would already help making the app landing page easier on the eyes is to change the look of the numbers at the right side of the group name which indicates how many new items are available in their Inbox.

Firstly they should be hidden if the number is zero. Secondly, they should be displayed more minimalistic and not written in white inside of a pale blue oval pill which is currently difficult to read.

This is well implemented in Apple Mail, Gmail, Things, and others: 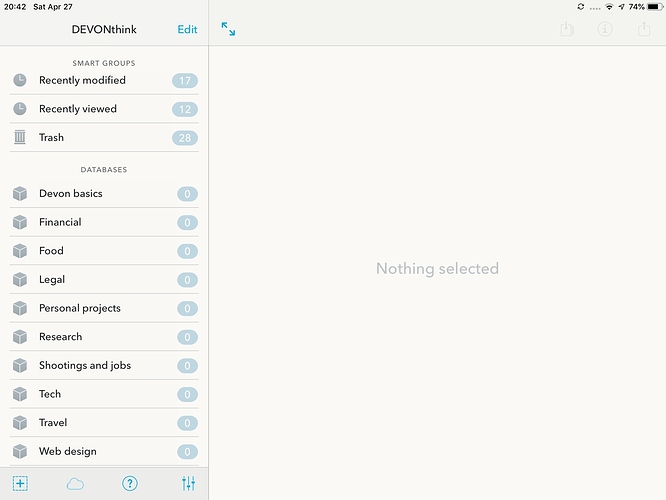 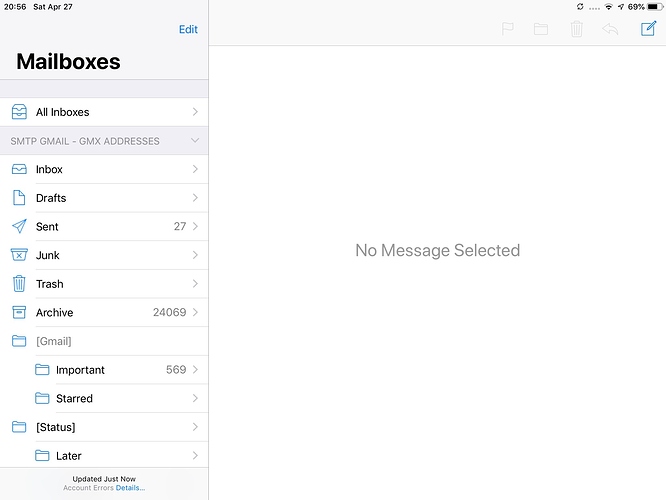 Earlier versions of DEVONthink To Go actually hid the numbers if they were zero and some other customers complained about the now-lost consistency. We put them into bubbles to make it follow the look of DEVONthink on the Mac.

We’ll keep your comment in mind when we work on DEVONthink To Go 3.

I know you can’t say, but curious what DTTG 3 will bring!