Database sync - multiple locations however for the same DB?

Hi, I had webDAV setup at one point, however moving houses caused it to fail. Subsequently found out it was due to Carrier-Grade NAT.

I have separate databases and separate locations for each. Primarily due to the total size of each database being up to 50GB.

For a single database (ie. Finance). I have the following

the Local IP link - was the original.

Does this mean that the single Finance database is effectively being loaded 3x times?
Are there any issues with having multiple locations for the same database?
Not too sure what additional overhead it will create as from the above behaviour?

It did however took a long time to sync ~60k of records. Almost the same time as the initial sync. [this is just my guess/ observation.

i’ll remove the local IP address and keep the DDNS location as they both serve the same purpose.

However can i ask here, is there any value then to have bonjour locations?
I am looking for quicker sync where the local wireless is used to sync where DDNS location is not possible due to firewalls or internet down.

i drew this out as not to be confused. 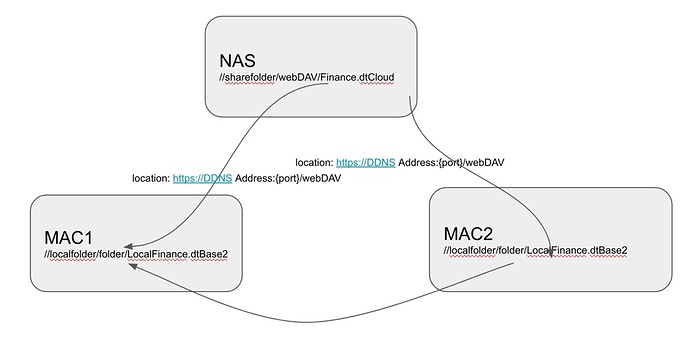 In your initial post it wasn’t clear whether the WebDAV locations are identical. But in that case each sync location just checks the WebDAV sync store but if the other sync location already uploaded/downloaded the necessary changes, then no more additional processing is required.

However can i ask here, is there any value then to have bonjour locations?

A Bonjour sync on its own is faster (and synchronous), meaning that the changes are synchronized a little earlier compared to WebDAV. But as all locations have to be updated and only one location can synchronize a database at the same time, multiple locations don’t speed up anything in the end.