Bottom line question: Can I delete a duplicate of an indexed file without deleting the original Finder file SO LONG AS there is another duplicate of that same file in the same DT database?

Further background: I have a database of indexed PDFs. Somehow, one of the groups/folders has duplicated–perhaps in a weird sync blip? You can see the two duplicated “Parliament Records” folders here. The one with more files is what I think of as the “true” group because the other doesn’t include some stuff I’ve added: 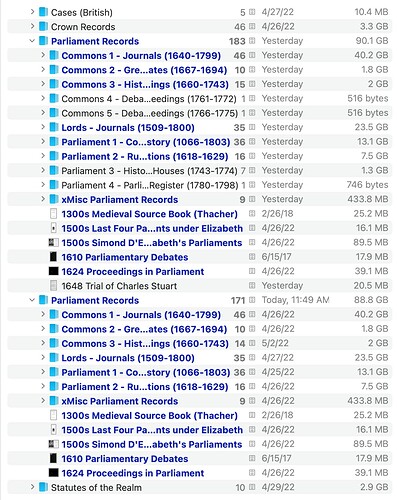 If I am reading this post correctly, I should be able to simply delete the smaller all-duplicates folder of “Parliament Records” without damaging anything else in the database or in the Finder. That is, the other in-database duplicates won’t be affected (that one I’m sure of) and crucially, the original Finder files that are indexed won’t be deleted.

I’ll back up my database before I do this, but the stakes are high enough (i might miss something!) that I wanted to confirm before I do. Am I right? Thanks as always for any thoughts!

ok now i’m just curious. Because on the SECOND computer, the stray “Parliament Records” doesn’t show up. And I’ve hit the sync button a bunch of times, and the re-index command a bunch of times, and left it sitting here to do whatever voodoo it does and still the second (synced) computer doesn’t show the stray/additional/duplicate “Parliament Records” group.

Any ideas what’s going on? (But mostly the main question stands: if I delete all the duplicates in the other computer, that’s not going to kill my indexed Finder files…right???)

You linked to a post that I made in 2014, when the then-current version of DEVONthink had a different treatment of indexed files. Please, do not assume that DEVONthink 3 operates the way DEVONthink 2 did eight years ago.

@MichiganUser add after: to your forum search queries to get better results:

This won’t exclude posts made by users who sticked to DEVONthink 2 (sometimes for a very long time), however in general you’ll get results for DEVONthink 3.

If I don’t find what I’m looking for with after: I change the query to use before:.

… I don’t think I assumed anything? Just trying to show that I’m not asking a question without trying hard to figure it out myself first. I would very much welcome any new perspective the DT3 rollout brings to the weird situation I’m facing; it’s a pretty important problem for me

The Parliament Records groups shown here are not the same size.
What is the Path in the Generic Info inspector for each?

Yeah that’s the weird thing, one of them looks like an earlier-stage duplicate of the other, that hasn’t included new files added to the “first” one.

Unless I’m missing something, the Paths look identical:

Heres something even weirder. The smaller one only appears on one of the two computers the database is synced to. Here’s what the root level of the other computer’s identical database (that otherwise is syncing beautifully) looks like: 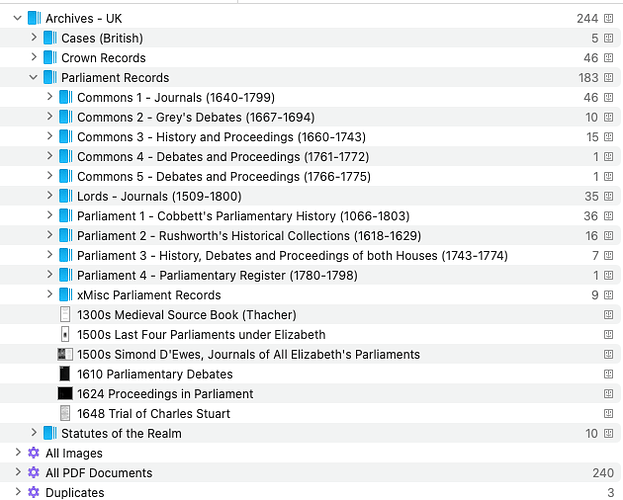 I would delete the indexed parent and empty the Trash, choosing Only In Database when prompted.
I would remove the duplicate as well.

Then I would reindex the desired folder - parent or individual folders as parents.

Deletion is done! And as I look nervously at my Dropbox sync record, . . . it looks like none of the original PDFs are getting zapped, so “Only in Database” worked.

Now just to be safe, I think I may just create a new database and re-index within that. (Once the indexed parent is deleted, there’s nothing left in this database, so I figure why not).

Thanks Jim - much appreciated.

Can I also ask: do you (or anyone!) have any idea why something like this might have occurred? I’m asking for future purposes, fearing it might recur. Wondering if there’s a known issue with like a setting that I could change, or if I need to somehow approach syncing differently (like, should I let DevonThink “rest” for a while before closing?)