I really love the new design and features - especially the reminders.
Are there any plans for integrating them into some other apps ? Most likely the stock reminders.app would be sufficient, but if you want to make me (or possibly Federico Viticci) happy, adding a x-callback-url for some further reminders automation

Welcome @OhneNik
URL schemes are simple and limited use mechanisms. It is possible to execute scripts with reminders, so that’s one avenue you could explore (and it would provide a lot more power than a URL scheme).

Reminders are a welcome feature, but it’s disappointing, in this day and age, when most apps are tightly integrated with MacOS and iOS, to have a standalone reminders feature that doesn’t sync with anything. The logical approach would be to sync with Apple Reminders. This would allow for functionality like adding reminders via Siri and integrating DT reminders with the many calendar and todo apps that also sync with Apple Reminders. Currently, reminders don’t even sync with DT2GO, so it’s really kind of half baked.

Currently, reminders don’t even sync with DT2GO, so it’s really kind of half baked.

DEVONthink To Go is on a different development cycle.

I understand that, just saying the DT3 implementation would benefit from syncing.

FWIW, I would definitely want the DT reminders to be kept separate from my Apple Reminders, so if the sync is introduced, I’d prefer it to be optional.

so if the sync is introduced, I’d prefer it to be optional.

H @JanSalomonsson, to not synchronize certain reminders via the iCloud, I created a Keyboard Maestro macro in combination with a Pushover notification.
When the reminder occurs, I can access DTTG directly.

Here I have provided a Gif: 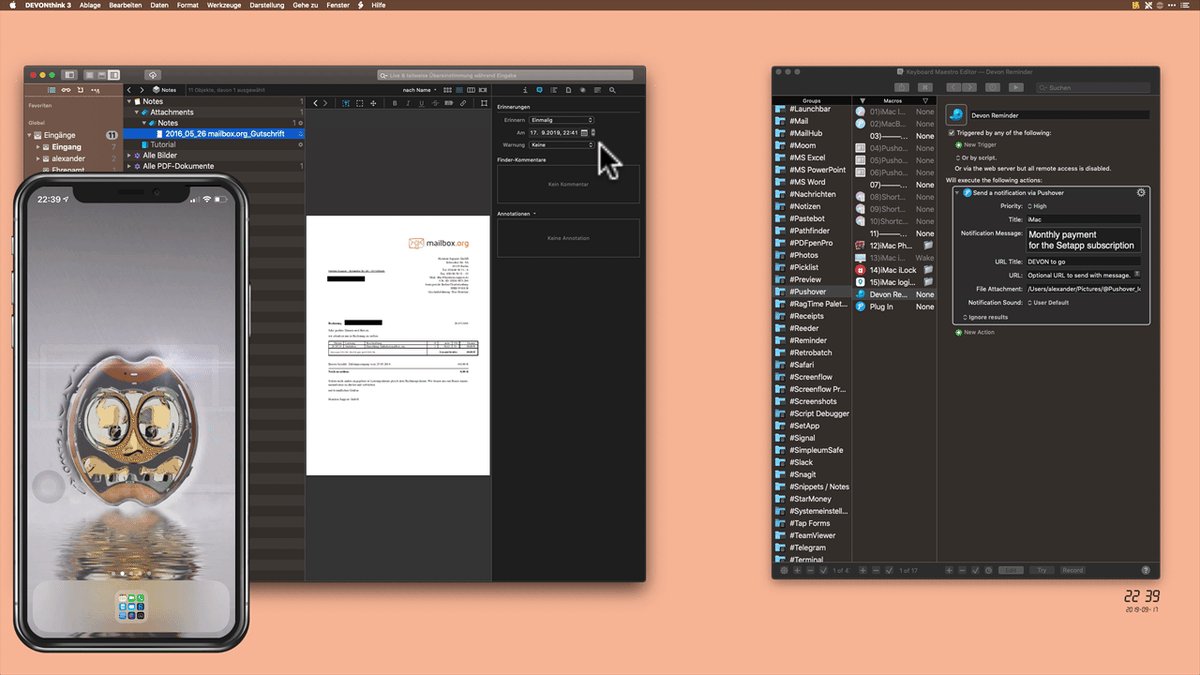 The reminder function introduced in @devontech 3 is unfortunately not yet included in the iOS version (DTTG). Once again @keyboardmaestro with an @PushoverApp plugin helps me. So memories are really fun even in DEVONthink To Go 😉 Looks good too 🤓 #DEVONthink3 #workflow https://t.co/ftfzazmGV1
RobH September 18, 2019, 9:10pm #8

I agree, without integration to Apple Reminders, they are less useful, at least to me. Testing DT3 reminders, I found I needed to change the OS notification style for DT3 to alert, so it doesn’t disappear after a few seconds. But even then, unless the reminder is sent into an ecosystem I’m monitoring, like Apple Reminders or Things, it’s not working well to remind me.

A Notification is not the only action a Reminder can run when an alarm is triggered.

Yes, there’s a lot the reminders can do. Unfortunately, reminding me when I’m not at my Mac isn’t one of them.

I wasn’t deriding the reminders, only stating that, for me, tying into a reminder service that can reach me when I’m away from my Mac would be useful. 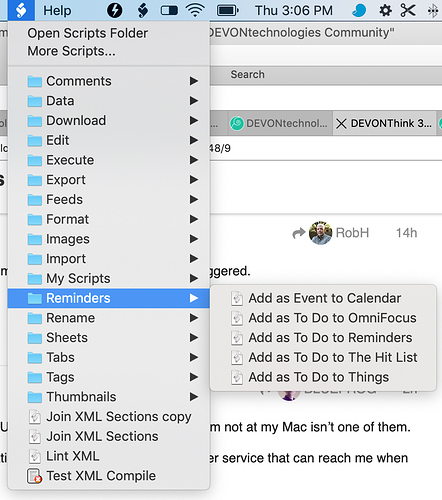 I didn’t realize those were there, Thanks. Looking for reminder options, I simply focuses on the Reminders panel.

I got the above message when trying to add to reminders. It did add to Things, but I noticed it was set with a Deadline instead of a Due Date. I’m not sure, but I don’t think these fall into their reminder scheme.

It’s a permissions issue and that should be something can be corrected. It’s not merely “a permissions issue”. It’s deeper than that and Apple has not made any convenient or user-friendly way to change your decision on some of the Security preferences.

Ugh. Thanks. I did check that in Preferences, but thought I was missing something.