Searched here, and google, and while finding articals and tutorials they are all antiquated and do not appear to address the following synching issue. Likely user error on my part and lost in the sea of tutorial, blog postings and trying to make sense of it all…

Issue ~ syncing not appearing on the other device. Everything seems fine w/Dropbox. Data not synching. Creating a new database on iPhone for example shows nothing on Desktop app. Desktop synch preferences only show local databases, nothing appears remote.

Any links to current related topics appreciated. Probably some simple setting somewhere…thank you. 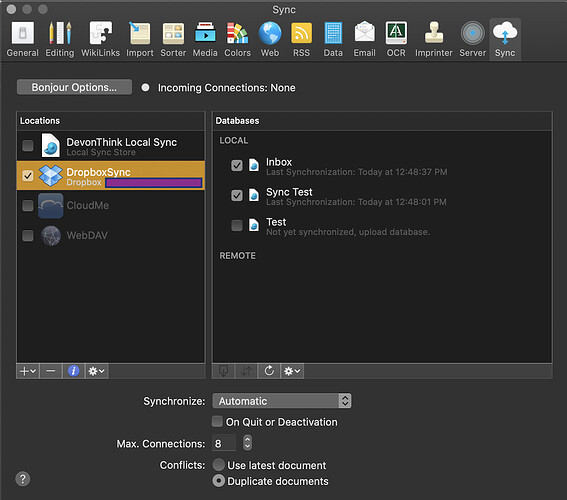 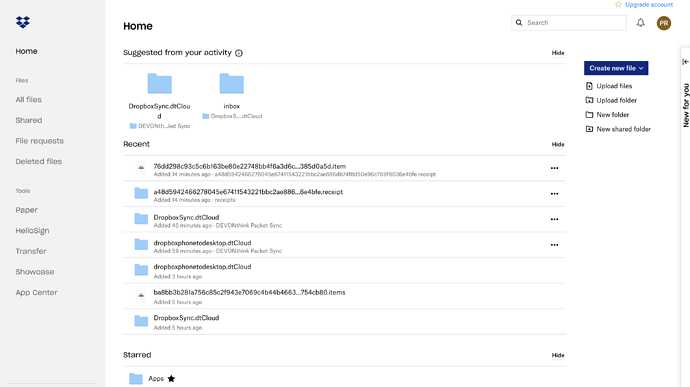 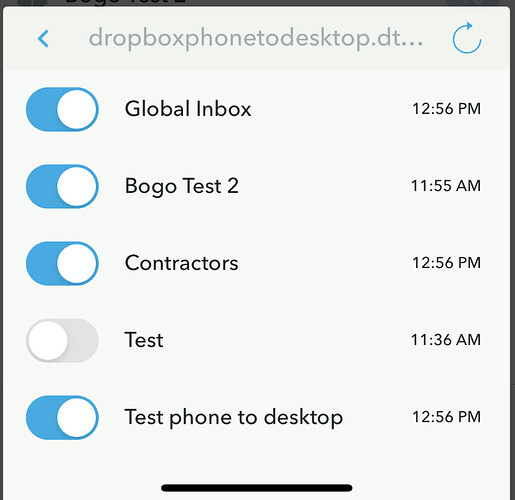 • DTP: Windows > Log = empty atm.
• DTTG: Path already exists for one of the databases. Not as concerned on that error as there are others from which to sync for testing purposes.

To rid yourselves of that error, you can clean the sync location.
In DEVONthink To Go’s Settings > Sync: Locations, left-swipe the sync location and choose Clean. You should see a triangle on the sync icon when it’s done. Touch the icon to check the clean was successful. You can then enable syncing databases again.

Cleared…fresh time stamps. Nothing from the one device appearing on the other.

You are using two separate sync locations: DropboxSync on the Mac and dropboxphonetodesktop in DEVONthink To Go. This will never work as they’re not the same location. You need to be using the same sync location.

Bluefrog, would you mind breaking that down further?

Dropbox is pointing to the same drop box account across the board (as I am seeing it) at present.
Never heard of ‘dropboxphonetodesktop’ so looking that up now…

That is what you named the sync location in DEVONthink To Go. 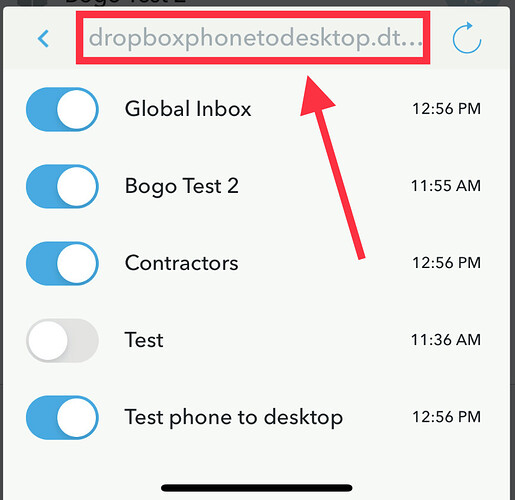 This is a completely separate sync location you’ve created. You must use the same name since you want to connect to one common sync location.

I see that label at the top of database share panel alright. Not something selected intentionally.
I tapped Sync > Locations > Dropbox and added the Dropbox locations.

See “dropboxphonetodesktop” at the top of your screen shot. You had to of given the sync database name that name.

At this point, best to read the Manual and “Take Control of DEVONthink 3” available for free "https://www.devontechnologies.com/support/download/extras

I deleted dropbox entirely, readied. now it states iPhone.dtCloud (as a name I used iPhone). I will read the document momentarily.

You still need a transport mechanism to support the sync: Bonjour (local network), Dropbox, WebDAV, etc. See the documentation. All devices that want to sync need to be pointing to the same named *.dtCloud” sync store. At this point, I would recommend you start again, and follow the instructions in the Manual.

k. In DTP I deleted and created a new local store file that is now in the dropbox directory.
Now the remote databases are showing. 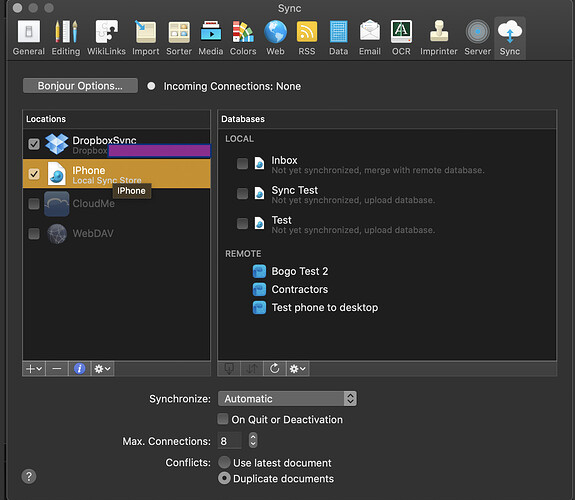 And now I have TWO sync topics, one for DropBox and another for Local Sync?
Is Dropbox needed now, or some reason it needs to stay like this? 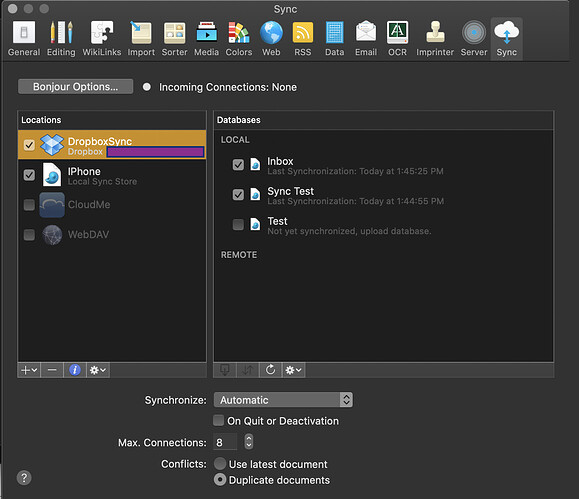 Syncing is starting to work. I need to experiment further…thank you for pointing out the user error.

And why did you choose a local sync store for DEVONthink?
Delete the current Dropbox location and add a new one named iPhone. That would be the proper method of using Dropbox for syncing.

Chose a location just for a place to easily access.

Will return to syncing at a future point.

Chose a location just for a place to easily access.

What location?
The screen capture you posted appears to be showing unusual information.

Control-click the sync location and choose Show in Finder. Where is is speciically located?

Did you create the location in DEVONthink before or after adding it to DEVONthink To Go?

This recent location was recent, to get the sync working. Do not recall which was first.