I am transitioning from SoHo Notes to DTP and need to set an alarm (precise date/time) for a given note, as SoHo Notes offered.
When I try to set an alarm to an active note through the AppleScript menu in French : Rappels/Ajouter comme tâche dans Rappel (/Reminders/Add as to do to Reminders), I have an error -1743 which prevents me to pursue the operation. When I try the same way but with Calendar instead it does not work either because at the end of the (long) process I have an error stating that Calendar is not able to record my required modification to set a precise date/time (I do not want it in the form of ‘tomorrow’, ‘in 2 days’, ‘in 3 days’, ‘in 1 week’ and so on).
I have not been able to get rid of these problems. Can someone help me ?
In addition, and I do not know whether it is linked to the above, in Preferences/General the « Restore » button for « Alerts » remains always inactive. Why ?
Thank you beforehand.

In addition, and I do not know whether it is linked to the above, in Preferences/General the « Restore » button for « Alerts » remains always inactive. Why?

This button is only enabled after disabling one or more alerts.

When I try the same way but with Calendar instead it does not work either because at the end of the (long) process I have an error stating that Calendar is not able to record my required modification to set a precise date/time (I do not want it in the form of ‘tomorrow’, ‘in 2 days’, ‘in 3 days’, ‘in 1 week’ and so on).
I have not been able to get rid of these problems. Can someone help me ?

Did you modify the scripts or do you use the ones shipping with DEVONthink Pro (Office)?

This isn’t an option in either of these scripts.

In the Finder, press Shift-Command-G and paste: ~/Library/Application Support/DEVONthink Pro 2/Scripts/Reminders. UnZIP the attached script and drop it in this folder. Now select a file in DEVONthink and try the Reminders > Add as ToDo to Reminders_CD. (Note: I haven’t done heavy date validation and it doesn’t support natural language. Just follow the two example formats in the dialog and it should work.)
Add as To Do to Reminders_CD.scptd.zip (20.2 KB)

Thank you for your replies.

1/ I did not modify any scripts (and do not know how to do it anyway), trying only to use those which appears - in French in the menu - with the app when I bought it on oct 13th.

2/ I put the ‘Add as ToDo to Reminders_CD’ script in the dedicated folder and it correctly appears on the scripts menu, but does not work, a -1473 error pops up again.

The problem does not he come from mixing up French and English ? As a froggy, I would rather prefer the French version of DTP, but if it simplifies things to use the English version, I can manage, bearing in mind that my MacBook is a version for France with all apps in French (Calendar/Calendrier, Reminders/Rappels and so on). 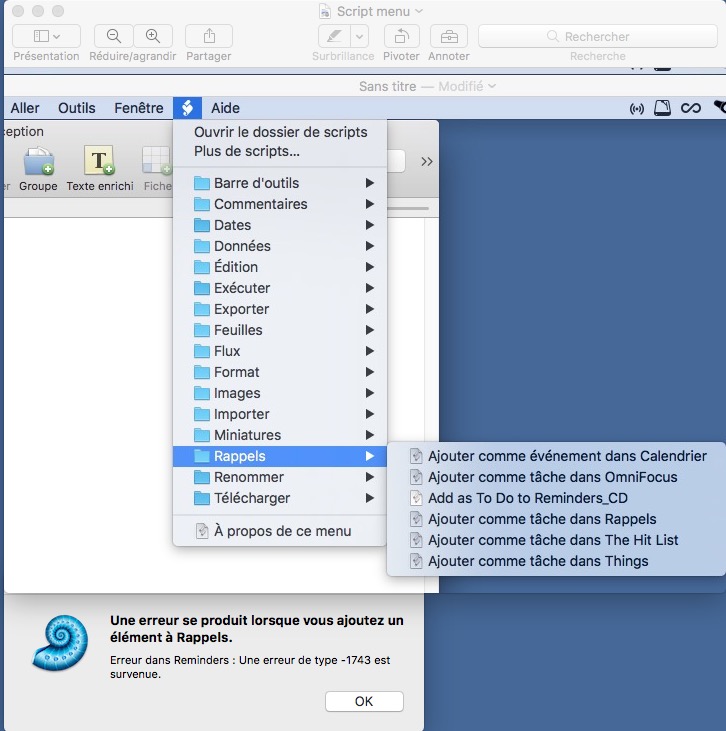 Select a file in DEVONthink. Then ppen the folder you put the script in and double-click it to open the script in Script Editor. Click the bottom Note icon, then Replies, then the Run button at the top. 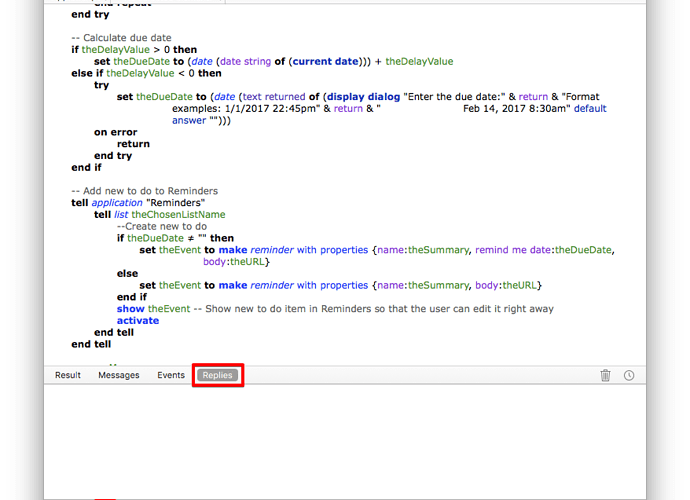 ScriptEditor.png878×839 89.4 KB
When it fails, the line should be highlighted. There should be a message at the bottom of the window. Send a screencapture of that.

Note: You were having an error with the previous version of the script, so it’s nothing introduced in this one.

Thanks for your msg and the time taken to assist, really appreciated.

When I click on the ‘Run’ button directly into the Script Editor, it works !

But when I run it in DVT from the script menu/Rappels/Add as To Do reminders_CD, it does not work, the -1743 error displays again and looking into the script editor, no highlighted line and no comments at the bottom of the page.

If we succeed one day, I have 2 more questions :

My own needs for setting up alerts tied to files in my DEVONthink Pro Office databases are very often more complex than could be satisfied by SoHo Notes simple reminders, or by any approach to scripting in DEVONthink than I can think of.

Occam’s Razor is a worthwhile guide to making decisions: the simplest approach that works.

Alexander’s cutting the Gordian Knot is a good example.

DEVONthink’s Add as Event to Calendar (without modification) and the Calendar app give me great flexibility in setting up alerts for a document in my database, and the simplest approach is to accommodate desired characteristics of the event by editing it in Calendar.

Example: I want to be notified of an action to take on a document on the first, second and third Tuesdays of next month. I want two alerts, one the day before and the second two hours before the action is due. I want to include a note to myself describing the action to be taken, with the possibity of adding to the note if problems are found or a repeat action after the second isn’t required.

To start, I select the document, invoke the Add as Event to Calendar script, select the Calendar I wish to use and pick a date to create the event in that calendar. Not a problem if the available choice isn’t the first Tuesday of next month – just create the event and move to the Calendar app to set alert times, change the date for the first instance, add a note describing the action to take, make it a repeating event and stop the repeats after the third instance. Done. With the exception of typing myself a note, this can be done in less than a minute.

Can that approach, including a wide range of flexibility to accommodate variations, be done by scripting? I doubt it, and even were it possible it would take a lot of time to develop such a script – more time than could be saved in the future, compared to my cutting the Gordian Knot approach.

You can’t. There are two examples given in the dialog. The date you enter must conform to one of them.

The easiest option, without modifying the script again, is to merely press the “c” button when the second dialog appears. In fact, you can quickly press “c” then Return.

Everyone has its own needs.
I am convinced DTP is a good and powerful app and eventually I’ll get used to it inasmuch that I have no real other choice.
The problem is that I was heavily using SoHo since beg of 2009 ; neither Calendar nor Reminders were existing at the time and these apps are of no use to me (and I am not keen at all to start using them) because the SoHo alarm system 100% fitted my needs.
Alarm on DTP is what froggies call « une usine à gaz » !
When, on SoHo, you merely have to click on « set alarm » and that’s it, on DTP, having not forgotten to activate notifications in system preferences, (i) you have to run a script located in a sub-file of a drop down menu, then (ii) you have to agree on ‘Reminders’ on a first panel that appears, thereafter (iii) you have to go for a second panel to choose ‘custom’ and, at last, (iv) you have to enter the time/date manually in an absolute specific format (1/11/2016 1:00am and nothing else) on a third panel.

One can say that it is easy, i won’t go that far.

And cherry on the cake, for me, despite the kind assistance I received, setting an alarm still does not work through the script menu, I must open 2 folders to run the script (the script folder and the ‘Reminders’ one) !!!