I’ve seen several comments saying DTTG is free? When has it been free? I paid $15 for it and it’s still the case.

And it still is free, unless you want the pro version.

Nothing wrong with discussion nor speculation of prices. That’s what forums are for.

All I want now is fix for DTTG bugs. 8+ months without a simple update.

That is correct and as such I made a mistake in my post; thanks for pointing that out. Rereading what I wrote in light of that mistake the points I made still hold true, ie my opinion remains unchanged. I’ve (transparently) edited my post to point out my mistake and recalculate the cost of DTTG based on a bag of cheese in my fridge.

solved by the company degrading the available options in the software

I totally agree that DTTG is a decent companion app to the Mac version. But it doesn’t hold a candle as a stand-alone app on iOS/iPadOS.

For people who love the Mac app so much that they can justify paying subscription for its accessory, the move to subscription is not an issue. I doubt that it’s the case for most DT users.

There’re people who use DTTG alone, like me. While I think it’s a good app, I definitely won’t be able to justify a change of business model in its current state, unless some revolutionary changes are made. I guess I’m in such a niche minority that my opinion doesn’t really matter.

There’re people who use DTTG alone, like me. While I think it’s a good app, I definitely won’t be able to justify a change of business model in its current state, unless some revolutionary changes are made. I guess I’m in such a niche minority that my opinion doesn’t really matter.

What changes would you find suitable for making DEVONthink To Go a good standalone app?

when you drive a Lamborghini and start to entertain guests in your country mansion, let me know, and I might rethink.

Actually, my car is a Fiat. But it’s also from Italy

I guess I’m in such a niche minority that my opinion doesn’t really matter.

Again, this is my very own personal opinion: I don’t think that’s true. To me, your opinion and that of anybody else who actually voices an opinion is equally valid; I have no doubt that DT value their customers - they are literally dependent on us. At the same time - to me - voicing an opinion entails more than just saying “I don’t like that” - you’ve just pointed out your use case, which to me is much more useful than the rather more unspecific complaint of too few updates. I don’t equate reasoning ones opinion with an opinionated post.

Eric has just responded in a fashion which to me confirms what I’m saying.

But it doesn’t hold a candle as a stand-alone app on iOS/iPadOS.

again what learned, as we say in German - thanks for that idiom

If DTTG requires a subscription of $25/year, I would expect it have pretty much feature parity with its Mac brother, which sells at $100.

As for OS specifics, I’d really like a better integration with Files, especially I want other apps to access entire directories in DTTG. Otherwise those organisations are kinda wasted.

especially I want other apps to access entire directories in DTTG.

Please could you explain to me what you mean by this, maybe with a specific example? I can access the contents of entire databases from other apps, so I’m obviously misunderstanding what you mean. 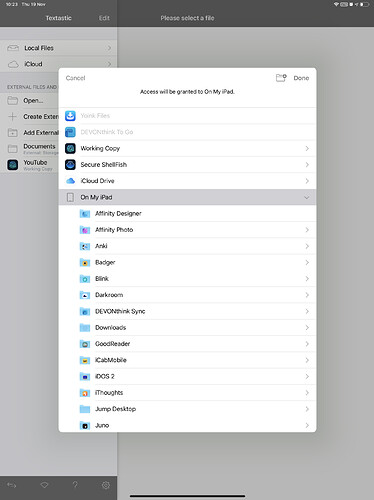 image2048×2732 293 KB
This is a screenshot from Textastic (a text editor) when adding external directories for access. You can see DTTG is greyed out. So I cannot let third party apps to access, say a database of markdown and images in DTTG, which makes it impossible to “compile” the html with images.

Unfortunately, that is a feature that requires storing files in real folders that other apps can directly access. DEVONthink To Go is a database and gives access through the file provider extension mechanism. Also, it supports replicants, which is not possible with simple files. As soon as Apple allows giving access to folder through that mechanism it’ll automagically work with DEVONthink To Go too.

At the very least, frequent bug fixes and new features added. Putting differences and complexities, just taking 2 other apps with small team of 1-2 developers as comparison - Drafts and Agenda, they constantly release new features and bug fixes. Have mentioned this multiple times, 8 months later and still waiting for bug fixes for DTTG is unacceptable IMHO.

I have to agree that Drafts and Agenda are exceptional apps on iOS. It might not be a good idea to expect every other apps to be on the same calibre.

Albeit there is nothing wrong with aspiring to be brilliant - but I agree it’s not ideal if everybody expects you to be. If @iApple or @MechanicalPoet have time & energy, I’d welcome a PM (because it’s OT and doesn’t belong here) on how you use Drafts (i.e. what does it do for you in everyday life, what do you use it for?) I’ve just browsed and am interested.

What changes would you find suitable for making DEVONthink To Go a good standalone app?

Three features that quickly come to mind, and all are available in one app that competes with DEVONthink To Go:

Three features that quickly come to mind, and all are available in one app that competes with DEVONthink To Go

You can be sure at least two of them are on our to-do list when the ground works are done.

Amazing they’re on both Mac and iPad/iOS platforms, yet still manage to constantly release updates adding features each time. Exceptional as you stated.