I’m curious about something: I just read an interesting review of DevonThink and it mentions importing all photos into DevonThink to organize them instead of using iPhoto.

My question would be: with my use of Apple Mail and other Apple programs, iPhoto is integrated and easy to attach pictures from. However, organizing iPhoto is kind of a pain last I checked - which was a few years ago, I admit. I haven’t really touched it since and I do have this beautiful new MacBook Pro laptop which I love so much… Maybe it’s changed, I don’t know.

However, since I’m thinking of trying to organize lots of photos, I’m curious as to the benefits of using DevonThink for organizing them as opposed to, say, iPhoto or even better: Picasa.

Picasa basically does what DevonThink does for photos, as far as I can see. I realize that Picasa uses Google’s lack of privacy code (heh…), but I’m wondering if that’s a major issue and more importantly if it’s the only issue?

I also have Aperture, but I never use it (I am a photographer but it never appealed to me). I basically use Adobe Bridge and Photoshop to import/edit/organize my photos that I shoot. But I do have a ton of other pictures I keep around like cartoon strips, beautiful renders, photos from others for my desktop and the like.

So what would you say the benefits are with DevonThink vs. all these other programs if I just want to tag and organize photos? I see Picasa as the best contender for doing this, but now I’m not sure as I’m in complete love with DevonThink and DevonAgent.

So give me an excuse to use it for my pictures.

Thanks for any input.

Hi Nat, i do this now for a couple of years, and to give you some excuses; it’s fast, reliable and you are the master of your stuff. My photo database is large but still speedy, and way faster than aperture. Importing to, say, mail is also easy, you can just drag something from the database to mail.
I do use it together with one other application called datetree, orange-carb.org/DateTree/.
After i import stuff from my camera i let datetree organize everything into folders according to exif data time & dates. Afterwards i import this into DT. I also tag everything with a year and month tag, so i now have something similar what iphoto an aperture do, only better and faster. It might be a bit more work than iphoto, although not much, but it’s wel worth it! I actually lost stuff in those other apps…
Here is quick screenshot of my database, hope this are the excuses you were looking for;-) 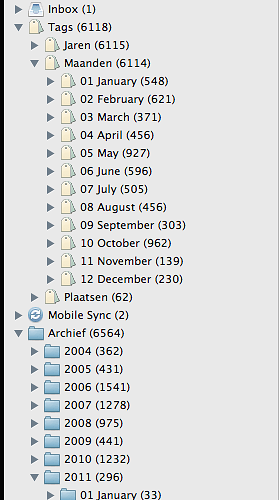 I am going to try it out. I haven’t been on my laptop much the last three days at all, but I really appreciate the help.

Picasa is great but, like you said, it’s a program I don’t “own” and that does bother me. The only thing that is nice is that you have far more editing capabilities in Picasa for on the fly editing than you do with DevonThink. And also, you can full screen pictures and cycle through them easily with the space bar.

I have been using Devon think to organize my stock photos/icons/eps/illustrator docs for about 6 months. I have well over 11 gigs of data and close to 20,000 files. Its lightening fast compared to Adobe Bridge, which is the worst of the bunch. The big turnoff for me with Lightroom is the lack of support for all the different formats I use, you are basically constrained to images and psd files. No illustrator, eps, etc…
Picasa is good but again, painfully slow compared to DT Pro.

Never really thought about iphoto, but all my personal photos are in there since they import from my iphone and camera, never thought about organizing them in iphoto!