Did I miss something? Can't empty locked files from trash

Did I miss something? When I try to empty DT trash, if there are any locked files, those files will silently remain in trash if there is at least one locked indexed file in the trash.

Selecting Empty Trash… from the context menu results in this dialog: 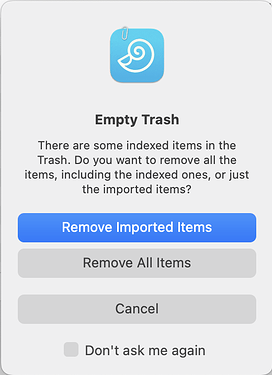 Both Remove Imported Items and Remove All Items buttons have no effect: the dialog closes and the items remain in trash. 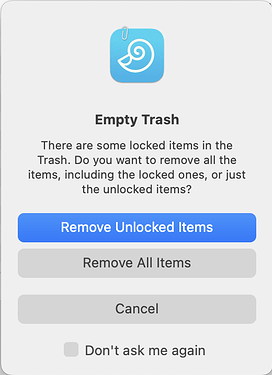 This dialog does allow me to remove locked items.

If I select Empty Trash… when trash only contains a locked indexed file, again the following dialog opens:

There is no way to empty the trash with this dialog; the locked indexed file always remains in situ. So what is missing is a routine and dialog which allows for locked indexed items to be deleted. As such, a single locked, indexed file makes it impossible to empty locked items from trash at all.

Did I miss something?

No. Only one alert is currently shown before emptying the trash, the kind of the alert depends on the items in the trash. Showing multiple alerts or complex dialogs with multiple options would be possible but this has IMHO its own disadvantages (e.g. it’s cumbersome or overwhelming and chances are that people would either disable/ignore the warnings or not empty the trash anymore).

I get that behaviour; but the current situation means that nothing is deleted from trash and there is no indication as to why not (locking takes preference over imported/indexed in the “do not empty” logic, whilst for the warnings it is the other way around). Again: the first dialog in my post (and the only one shown in the circumstances) does nothing, regardless of which button is clicked; no other dialog will ever show up unless the user guess the problem.

Again: the first dialog in my post (and the only one shown in the circumstances) does nothing, regardless of which button is clicked

In case of only locked items this dialog could be probably skipped but this wouldn’t improve things in case of both indexed & imported, locked & unlocked items in the trash.

Yeah, I’m not sure of the right solution; but a dialog which does nothing, but also doesn’t indicate why it hasn’t probably isn’t it. I kinda wonder whether a more complex dialog would be in order…

If the dialog consisted of 4 elements, which appear active as and when…

The advantage would be that the user would always be confronted with the same dialog. The dialog would self-dismiss after emptying the last file from trash, otherwise by selecting close.

(I am not a UI programmer, not have I read the appropriate style guides; so this is just me playing, wondering whether one predictable dialog is better than several different ones…)

The dialog would self-dismiss after emptying the last file from trash, otherwise by selecting close.

Although a custom dialog could of course work like that, this would be a highly unusual/unexpected behaviour when emptying a trash.

My brain works in a highly unusual - hello, and welcome to.

Sure, the dialog could close after you had hit whatever button; but then you’d need a further button which says “Remove All Items” (to avoid ppl having to open the dialog twice), which would in some cases do exactly the same as either “Remove Imported Items” or “Remove Indexed Items”.

I would like to have something like what @Blanc proposes. And yes, @cgrunenberg, it is a very strange way to empty a trash bin, but DT is the last “think different” application remaining in Apple ecosystem… I don’t mind thinking differently if that thinking has advantages.

However, I’m going to add more fuel to the fire: deleting an indexed file does not delete it from indexed place, it is only “marks as deleted” inside DT. This is not how trash bins work. If you delete a file, you really put it into a bin. I understand that for imported files it is the same: the file is not trashed into anyplace, it is only marked as deleted in database, and then it is really removed when the trash is emptied.

As said, doing it with imported files does not mind because we lusers don’t see the file, but with indexed, we still see it, and replacing a deleted but not trash-emptied file will create a new “-1” added to the new added file if they have the same name, breaking the rules.

What I think is more logical is, from indexed items, really move the item into a special place, does not matter if it is an external indexed folder or an internal one. Then, on bin emptying it will really be deleted or restored if user moves out of bin.

Well, this has the handicap that if you move the file internally, and if the file is indexed in a cloud, you will get the “Dropbox thinks you are quite stupid and are deleting a file” message.

I know it is not easy and that’s the reason I’ve said “add more fuel”.

I’m not complaining about the current way it is done, but only adding my thoughts.

The next release will simply add a new checkbox to the alert in this case.