I have a database on DTPro of about 8 GB but, after syncing, this same database is about 20 GB on my iPad. What could be causing such a difference?

I use many replicants, it is possible that they are being downloaded more than once?

I checked the database with 208MB/217 items from my Mac with the properties on my iPhone as well. On my iPhone that database needs 497,5MB with 217 items. It is synced via Webdav and download files is set to “On demand” in the database properties as well as in the general settings of that sync store.

But there are still 14GB “missing”, which documents of DTTG take up according to Settings > General > iPhone Storage, which states 39GB for DTTG documents. If I sum up all the GBs from the database properties of DTTG, that should be just 25-26GB.

I have also observed that when I sync using dropbox, the databases on iOS are much bigger than expected. It seems to be downloading parts of the database several times, regardless the “Always / On demand” configuration (as I have many replicants, I wonder if maybe they are downloaded more than once). If I use a direct sync between Mac and iPad (without dropbox), the size is, more or less, the expected.

The numbers on iOS seem to be too high, we’ll check this.

The total size of the databases is shown here: 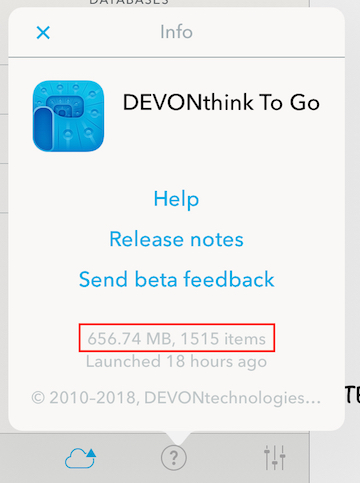 I checked the total size of databases on my iPhone and the dialog displays 12.24GB - a size I would except from the size of the databases on my Mac. BUT - the database size displayed in the info of single database in DTTG stated a much larger size and that size corresponds more or less with the size in the iOS settings for DTTG documents&data. I have summarised the various sizes in my previous entry.

My iPad is still syncing. The sync was interrupted two or three times and the size of the database, which has 10.7GB on my Mac, gets bigger with every sync. It now displays 80GB in the info of that database, but the iOS settings just display about 26GB in total for DTTG. The displayed total size of databases on that iPad are similar to that on my iPhone.

I only stumbled upon that problem because last monday a DTTG sync of 14GB crashed my mobile data plan. That sync should have been just some MB and it was the only mobile data activity at that time. So, there actually was a huge file transfer. It seems not to be just a problem of displaying the wrong sizes in DTTG or iOS settings.

The numbers I wrote yesterday (26 Gb on iOS for a database sized 6 Gb on OSX) were obtained from the database info in DTTG.

I reinstalled the iOS app and synced my database directly with the iMac and the sizes are more similar to what should be expected, but when I sync the database with dropbox on DTTG it quickly rises from 6 to 25 Gb (in the database info and in the iOS settings)

@jedagon: In DEVONthink To Go 2, select Help > Contact Us to start a Support Ticket. Thanks!

Are there any news on that issue? My iOS-Databases got a little bit smaller, but are still much larger than they should be according to iOS settings app.

Please shoot me an email (eboehnisch(at)devontechnologies.com). We have added some debug logging to the lastest beta version of DEVONthink To Go to track this issue. We assume it’s a wrong calculation on iOS’ side as what you see in DEVONthink To Go’s Help screen is the actual sum of all file sizes in the app’s database and support folders.

Any news to this problem?

I have a similar problem: a 1,7Gb database on my Mac cannot sync on my iPhone (me too using Dropbox) because much more space is required on it, much more than 4Gb. Don’t know precisely how much because the phone fill up and I need to remove DTTG from it to free space again.

Was this ever resolved? I’m using current versions of DevonThink Pro Office and DevonThink to Go on an iPhone 10. I found this thread after searching for this issue. I am currently having this problem. I noticed because my “free space” on my iPhone keeps going down significantly. Currently, for databases that are approximately 4.5 gig on my Mac, my iPhone is showing space used at 12.47 gig.

No, sorry. I’ve used it for so long I forget that the name changed. Devonthink 3, latest version.