Hi, I have 2 different Apple ID’s on both my iMac and iPhone so I can’t sync trough iCloud.
I want to use a direct sync from iMac to my iPhone - connect my iPhone to the iMac with a cable. How do I set this up ?

Step 1: On the machine acting as the server, open [Preferences > Sync] and press the Bonjour Options button.

Step 2: Click Enable Incoming Connections to use this Mac as a Bonjour server of its databases. Optionally, have closed databases open when a client initiates a sync.

Step 3: Enter a mandatory password. This password is required for other devices to act as a client of DEVONthink’s. If you are working with an IT department who has assigned a port for you, or you have a port you’d specifically like to use, enter it in the Port field. Otherwise, leave this blank and DEVONthink will assign one for you. 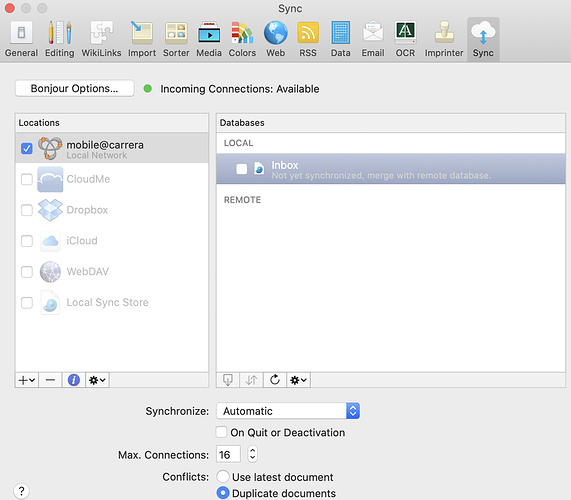 Should I thick the box: LOCAL - Inbox ?

What is the best way on the iPhone, use the Global Inbox for sync ?

What is the best way on the iPhone, use the Global Inbox for sync ?

In the list of sync locations select the Mac and afterwards enable the global inbox in the list of database. This will merge the local inbox of DEVONthink To Go with the one on the Mac. 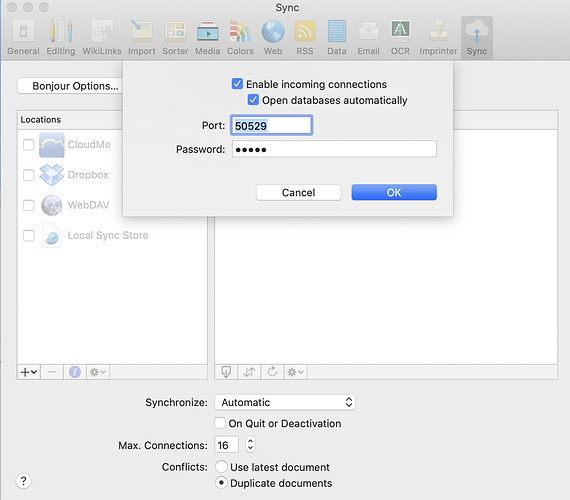 On the iPhone I turned Bonjour OFF

But on my iPhone it does not show up : 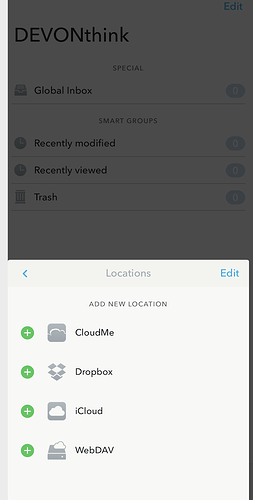 Are both the Mac and the iPhone connected to the same network/router? In addition, please check that the firewall of macOS doesn’t block DEVONthink.

You need to check the Firewall in System Preferences > Security & Privacy and add an exception for DEVONthink, if you have the firewall enabled.
If you are running a network monitoring app like Little Snitch, you’d need to do the same in it.

Reviving this thread! I have a direct sync between macOS (server) and iPad. I hadn’t turned my iPad on for 3 weeks and now when I do it doesn’t seem to sync.

Yes, mac and ipad are on the same network and all that.
And note I noticed in iPad I had Bonjour turned on also (oops) but it’s turned off now and still not syncing. I can see my local network in the iPad locations… It’s turned on.

I think I need to delete that iPad Local Sync Store, right? Not sure what it is for!

Incoming connections (see e.g. Preferences > Sync on the Mac) are only necessary on one computer, all the other devices/computers should connect to this central computer via a Bonjour sync location.

Ok, Yes! Thanks! But… that doesn’t answer my question

Why on MacOS in pref>sync is my Local Network “offline” (see photo)? How do I get it “online”?

Why is DTTG on iPad not synching to that local network (because it’s offline)? The local network connection on DTTG is turned on. The Cloud icon is transparent. And nothing loads.

The issue is my iPad was turned off for 3 weeks. Now when I open it DTTG doesn’t work…

As long as the iPad is awake, DEVONthink To Go running and the iPad is in the same WiFi network this should actually be available. Does rebooting the iPad/the router fix this? However, as already mentioned your setup is not the recommended one.

I checked the software and everything! Rebooted! Doesn’t work.

The Local Network on DTTG and DT3 both say “offline”…

Does e.g. the firewall block DEVONthink (see System Preferences > Security)? In addition, I would still suggest to change your setup first.

Change what setup? This is the correct set up…

I turned Bonjour off on the iPad yesterday. It’s done.

Firewall is not an issue… 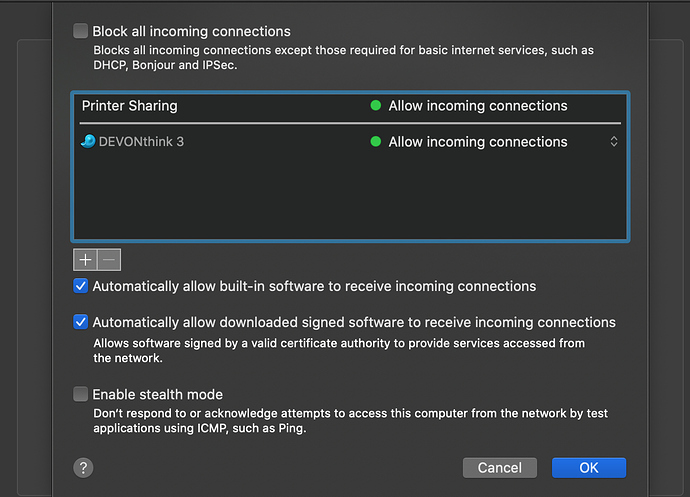 Change what setup? This is the correct set up…

Incoming Bonjour connections are enabled both on the Mac and on the iPad according to your screenshots, see DEVONthink > Preferences > Sync > Bonjour Options. Only one computer/device should be the server allowing incoming connections, the other device/computer should connect to via a Bonjour sync location. This is sufficient and avoids unnecessary conflicts (e.g. of ports).

As I mentioned, I resolved that ages ago. It’s not the issue.

My setup is what it’s meant to be.

On MacOS DT3 (the server) I have incoming connections enabled.

On iPad DTTG I have incoming connections disabled.

But still… DTTG and DT3 both say that the Local Network is “offline”.