I haven’t seen anyone commenting on this, so either it’s obviously a work in progress, or it’s only happening to me:

I see two sidebars. There’s the old-style one from DT1, and the new-style, Cocoa-y one.

Some things are present only in the old sidebar (Yesterday group, Unread, All Images, All PDF Documents, top-level folders). Some are only in the new (multiple databases, favorites). Some are in both but seem to be arbitrary; “Today” is in both, but “Yesterday” is only in the old.

Is this just because you’re leaving the old sidebar around until you port all the functionality to the new one? Or is it a problem with my system? 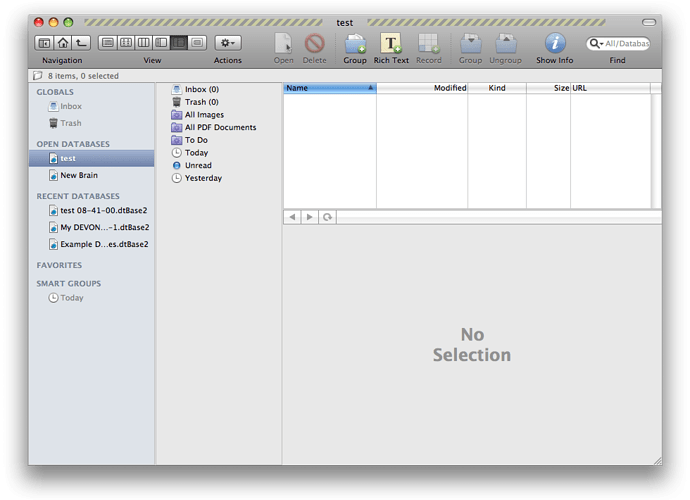 The new sidebar is global/app-level stuff. It’s totally different from the left pane of your database view.

Hmm. In retrospect, I can see what you mean, but I think that’s going to be very unintuitive to

If you look at it with those eyes, the sidebar and the left pane are almost identical. True, they have a different visual design, but that makes them feel more ungainly. It doesn’t make me think “This left pane belongs to the database, not the app” - again, especially with only one database, that’s a distinction without a difference.

but I think that’s going to be very unintuitive

So much functionality in DTPro seems to be built this way.

Hmm. In retrospect, I can see what you mean, but I think that’s going to be very unintuitive to

If you look at it with those eyes, the sidebar and the left pane are almost identical. True, they have a different visual design, but that makes them feel more ungainly. It doesn’t make me think “This left pane belongs to the database, not the app” - again, especially with only one database, that’s a distinction without a difference.

Ah, but circumstances can make all the difference, both as to whether the sidebar becomes useful, and is or is not intuitive…

For the single-database user, Control-Option-Command-D will toggle off the sidebar display.

But suppose you have several open databases, and still others that have been opened recently. That’s a different set of circumstances.

Now look at the new sidebar again. Does it now seem intuitive? Yes, of course. It has functionality that’s obvious on inspection. That is, it lists both the currently open and recently open (but now closed) databases.

Each of these behaves in familiar ways. If I click on the name of a different open database than the one I’ve been looking at in the frontmost view, the view changes to that of the database I just clicked. Very similar to selection of a different document in a Three Panes view.

If I click on a database in the Recent Databases list, nothing happens. But if I double-click it, it opens. Again, familiar behavior – double-click to open.

There’s also a list of Favorite Databases. If I Control-click on a database name in one of the other lists, a contextual menu option lets me add it to the Favorites list.

There are other components on the sidebar that are not yet active in DTPO2 pb2, including Globals and Smart Groups. These will be useful to users who maintain multiple open databases.

A future release will automatically open on relaunch the set of databases there were last open at Quit.

Suggestion then: Don’t pop the sidebar open by default unless the database I’m opening is the second database I’ve opened recently. If you’re a single-database person, it’s just confusing.

Also: It would be nice if the left pane were given a visual refresh; I guess I was hoping for that from the sidebar. I don’t know if a sidebar-within-sidebar would look more confusing, or just equally confusing, but something to think about…

Seems like all of this “familiar” behavior could (or perhaps should) be handled using the familiar method - menus. “Recent Databases” is already available, “Open Databases” could work as part of the windows menu. Not sure how many folks will have enough database lying around to justify a Favorites list.

This leaves the global Inbox. I’m glad the current beta has it disabled because I imaging I’ll be clicking it accidentally quite frequently once it’s available.

Guess we’ll see how the extra sidebar pans out once all of the functionality is there, but for me, it’s Command-Option-Control-D.

I personally need as much of a visual layout as I can get. Admittedly, I’m a sidebar fanboy, but I think it has the potential for a large number of new features… and for ultimately reducing ambiguity. By all means, though, have it off by default.