Just upgraded to the latest version of DT Pro. I’ve never heard of CloudKit but I see it’s touted as a new, shiny better sync solution.

I’ve been using Dropbox to sync databases on a Macbook Air, iPad and iPhone, and while there is an occasional hiccup after a device goes to sleep, it works without real problems. My Dropbox account is more than adequate for the storage required.

I am very much of the “if it ain’t broke, don’t fix it” school of thought, especially about sync processes, so I am inclined to stick with Dropbox. But maybe I am missing something? Is there a compelling reason (speed, reliability, security, something else) to switch to CloudKit from Dropbox?

I’d be grateful for any thoughts. Thanks, as always, to this community.

My understanding is that it is, indeed, faster (I think I saw discussion of 2x faster).

Ahh, found it - in the release notes. 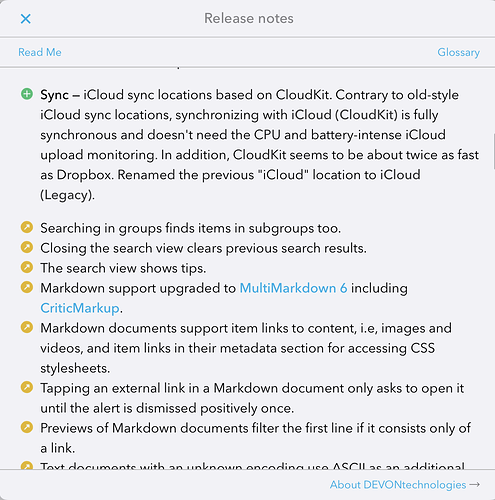 In this moment there are some problems with CloudKit syncing, not critical but you could wait a moment, especially when you have big databases with many files

Hi – Per the title. I’m seeing Request failed with http status code 503 and CKErrorDomain 6 On my iPad and Mac as it’s attempting to sync. On iPad it’s a notification. On my Mac I see this in the log. Once I see this error, it looks like syncing stops there, and when it tries to start again immediately stops. [IMG_0215.PNG] [Screen Shot 2021-02-10 at 8.40.15 AM]

Thanks to all. It does seem prudent then to wait until we are past version 1.0 (as always).

Wondering if anyone else has migrated from Dropbox to CloudKit and can comment if there is any meaningful improvement … better background sync, faster on-demand sync, etc.

Been with Dropbox for years. No real complaints, but if there is a faster, more reliable method, I’m game to switch.

But if they’re comparable, then no need to pull the trigger.

I switched to CloudKit from Dropbox. It works fast and no issues yet. When I say fast, it seems faster to me. I don’t have an objective measure on that.

My reason for switching:
An odd error would creep in from DB stopping sync. According to Jim in DT support there is a difficult error in DB affecting some DB & DT users. DT is continuing to attempt workarounds but has not been successful yet.

When CloudKit became available, I tried it since the most recent updates to DTTG and DT stopped my DB sync again.

My problem was somewhat complicated by the Ghost files DTTG 3.x created upon conversion. These also stopped my sync, even with CloudKit.

Once free of Ghosts, CloudKit has worked very well. It is important you sync only one DB at a time as suggested in the forum (Note from Jim). CloudKit will throttle your efforts if you try all your DBs at once.

I have one DB that would not sync with CloudKit. I have a 72 GB database with 852 scanned books. A few years ago I scanned all of the books in my library. They are now all searchable in DT. This process is a subject for another story. While CloudKit would stall syncing this to my iPad, I was able sync on DB (go figure). I give this database its own sync store. We will see if this sync will stall like the rest but for now it works. It is fun having my library available on my iPad.

One additional note. All my DBs are indexed. The files live on my iMac but the folders are also synced to my DB account. I had several reasons for indexing. One of the reasons for my shift to indexing was to remedy the issues I was having with the DB sync. Like all my other efforts, sync worked for a season, then stopped.

I hope my story helps you in your evaluation of CloudKit. I had great help from Jim with DT support in understanding the issue with DB. He also gave me advice on sync with CloudKit.

However, we have been hearing very good reports that conform to our experience in testing. And as @GuernBlanston helpfully pointed out, being patient with the initial push is seeming to help avoid some of the throttling we’ve had reports of.

Thank you! This is very helpful. I think perhaps I will test CloudKit sync on a small DB and if I find it works without problems, move the main ones over.

How do you assure that you are syncing only one DB at a time? If 2 are open, both will sync, won’t they? So does “make sure you sync one at a time” = “only have one database open at a time”?

We believe in opt-in processes as much as possible. This means just creating or opening a database will not sync unless you explictly enable it. (That’s a decision for the user to make, not the software.)

Just check the checkbox for one database in the sync location in DEVONthink’s Preferences > Sync. Wait for it’s activity to finish, then enable the next, if needed.

@Dberreby Follow Bluefrog’s recommendation, this is exactly what I did.

DB allows for multiple sync stores where Cloud Kit only allows one. Bring up everything slowly, one database at a time. I made a mistake once and thought a database had uploaded and checked off the next box. Sure enough, CloudKit throttled the upload. I noticed my CloudKit databases uploaded quickly when taking this measured approach. I have pretty fast internet service so it may look a little different for you.

I gather this this a one-time thing, when one is first syncing big databases? If I had to do this every time I opened databases, I would certainly lose track (forgetting to check and uncheck the boxes). But if it is something to do once when first starting the process, I can live with it.

Thanks, as always, for the quick and useful answer!

You’re welcome and yes, if you enable syncing a database, it stays enabled unless you disable it or clean the sync data.

Just a postscript to say that after much hesitation I finally switched over to CloudKit. And, as others have mentioned, it is faster and smoother (far fewer “timed out” messages or other hiccups). It’s a real improvement! Thanks for encouraging me to make the jump.

Glad to hear it and you’re welcome!

Hi Jim! As of today my desktop and my laptops are synchronized using local networks.
I now need to move two of the laptops to a new location and want to allow DEVONthink To Go to easily sync metadata without being on the local network. So I need to switch to an online sync method.

I have enough storage on both iCloud and Dropbox. Initially I considered using Dropbox because I never had a reliability problem with it and because of all the bad experiences with iCloud, the iTunes-related data losses I experienced years ago, the lost notes and the Safari tabs that never correctly sync up to this day.

Then I read this thread that highlights how iCloud (CloudKit) is the fastest option, so I considered using it. I did a bit of research and found a very different opinion on iCloud / CloudKit from developers:
https://www.lifewire.com/icloud-sync-may-not-be-as-dependable-as-you-d-like-5217076
https://www.macrumors.com/2022/01/24/developers-icloud-unreliability-bug/
https://reverttosaved.com/2022/01/24/icloud-sync-is-randomly-breaking/

I want to take the absolute safest choice because, not only do I not want to lose random files during sync, but considering the very big size of my databases (for instance one with 44k elements in 146GB and one with 47k elements in 236GB) I would never realize soon enough if a dozen files started missing somewhere.

What is your take on this, your own experience and the feedback you got from support request? Should I not use Dropbox and play it safe, even at the cost of some performance?

Glad to hear you’re up and synced via Bonjour!

Regarding a remote sync, we don’t advocate one service over another. iCloud seems to behave better in some instances (or just on some days) and for others, not so much so. That being said, you are correct that iCloud / CloudKit is a sore topic for many developers (and users) so if I were to be asked over a coffee or an adult beverage, I’d opt for Dropbox - again, with no affinity for the service.

But as noted here, any remote sync option comes with it’s inherent weaknesses…

Syncing Mac-to-mac or Mac-to-mobile is done via our Sync plugin (see DEVONthink’s Preferences > Sync or DEVONthink To Go’s Settings > Sync: Locations). Sync is simple but you need to choose the type of sync method to use. We suggest using a remote sync option when it is needed, not merely because the option is available. For example, you may have an iMac at home and an iMac at work. It would be impractical to move one machine to be able to sync. Or you may have a colleague, assistant, or signi…

One side note: Many people feel Dropbox is too intrusive on your system. (I will reserve my comments for the second coffee or adult beverage - LOL). That being said, Dropbox’s application is not required to sync DEVONthink with it. So if you’re only going to use it for non-syncing use, I wouldn’t even install their application.

Thanks for the answers Jim!
I realize that I sounded like I just started using Bonjour sync while I really meant I was currently using it and have been happily using it for years with no single issue in the recent years.

Now how can I materialize these two adult drinks? Is there an online tip jar? I’d be happy to use it!

I share your concerns about public statements over an undisclosed fruit company that generally discourages free expression.
I already have the Dropbox app installed on all computers so even though I hate their reminders to force me to move my Documents folder to their cloud, I suppose I am already used to it. Unless they do more intrusive things that I’m not aware or. And yes I’m aware that Condoleeza Rice is a member of their board and that NSA definitely has their own private key access to all data, the same way the infamous Windows leaked NSAKEY showed many years ago, and iCloud is probably no different because of US laws. I suppose a probably-non-NSA solution is through a GDPR WebDAV provider such as CloudMe, but with a big difference in price, and a limitation on files over 2GB (maybe due to the WebDAV protocol). I wish there was an option to use the non-WebDAV Proton Drive, that has a proprietary security system.

Has there ever been a verified instance of data loss using Dropbox? As you can see I’m struggling to find a balance between the comfort of interacting with my databases from anywhere with my iPhone, and the safety of data.

Haha! Thanks for the offer but I’ll patiently wait until we all can easily share an aperitif in person

Has there ever been a verified instance of data loss using Dropbox? As you can see I’m struggling to find a balance between the comfort of interacting with my databases from anywhere with my iPhone, and the safety of data.

Due to just using Dropbox as a sync location? Not that I recall.
There are certainly cases where people have indexed data and accidenally or unknowingly deleted things. We do have one ticket open on some unknown deletions. However, it is unclear where that issue is coming from.