I’m so close to getting the perfect multi-computer Devonthink setup. The hitch: my Dropbox sync store is using what seems like an INSANE amount of memory.

When I go to the “Manage Storage” option through the “About This Mac” option under the Apple menu, the biggest item by an order of magnitude (other than a separate Finder folder with all my PDFs) is a “DevonThink Packet Sync” folder in Dropbox. It clocks in at 128.8 GB! 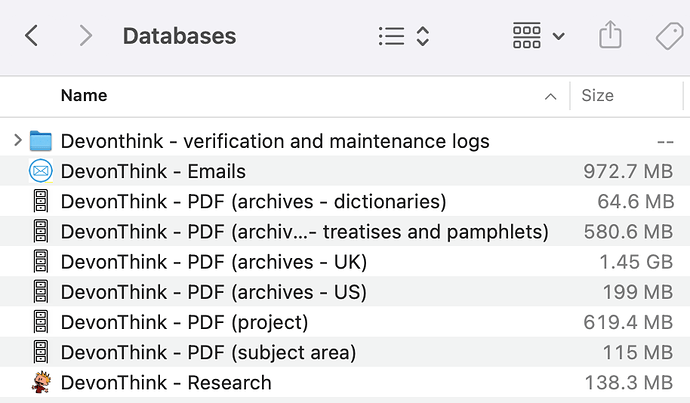 What’s going on here? These databases do index (very large) PDF folders in my dropbox…but can it really be that indexing (vs importing) uses as much memory as the underlying PDFs themselves??

Would love love for there to be some simple fix to stop my computer from running out of space. Help!

Many thanks,
Michigan User

This is already covered in the Help > Documentation > in & Put > Sync > Dropbox section and has been discussed before…
You do not need local sync data for Dropbox. Our sync engine doesn’t even use the Dropbox application so you’re just wasting disk space and bandwidth.

Go into the Dropbox application’s Preferences > Sync > Selective sync, press the Select folders button, and disable the Apps/DEVONthink Packet sync folder. Okay the change. The sync data should be removed from the machine.

Yes! That’s what I get for setting up a bunch of new databases and thinking “I know how to do his already” without RTFMing : ) I forgot about that step – thank you!