DT is nearly the best outliner on the planet. Only one thing is needed

Abstract: DevonThink would make a superb outliner if we could view Group Names—and also all other Names—fully and simultaneously.

As you all know, we like to use Tinderbox and Scrivener for outlining because (a) we can nest notes/scrivenings inside each other, (b) rearrange them, and (c) see what each one contains.

I’ve been using DevonThink as an idea-sketcher and -outliner since before most of you were born. This is done by using Groups as the notes/scrivenings, because only Groups are nestable. The fact that DevonThink lets you create Replicants, and the fact that Groups can contain anything, including other outlines, makes DT the greatest potential outliner on the planet.

The problem is that we cannot see the full Name of the Group, only a single (short) line of text.

Now, my crappy way to get around this has been to keep the right-hand Inspector open (showing Info) and use the arrow keys to reveal the full Group Names one at a time.

But imagine if we could read full Group Names all at once!

So, Jim and Christian, are you comfortable with the idea of having a toggle switch that lets us see full Group Names inside List View? This would only entail letting the Name text wrap and push things down a bit more.

What do you think?

Wrapping of too long names in List view is actually planned for future releases.

I agree. Devonthink is a superb outliner and will be nicer for that when the group name wrap feature comes along.

My favorite thing about outlining in Devonthink is how a topic that appears more than once in a work can appear everywhere it’s needed through dark arts, alchemy, and…

No, wait, tagging and replicants. That’s all you need. I was overthinking.

Holy cow! That’s fabulously fabulous! I hope we can still keep the single-line option when we want to, however.

Are you going to have the wrapping option apply per database, per containing Group (per window), or per individual record?

This is an utterly amazing use of the software that I would never have come up with on my own. (Perhaps I missed it in the copious documentation?)

Are you going to have the wrapping option apply per database, per containing Group (per window), or per individual record?

It’s just on our to-do list so far but not planned for the next maintenance releases.

since before most of you were born<<
Having said a similar thing to someone recently, the just made me laugh out loud!

I don’t quite get what an outliner does or can do (and there is no possible way for me to find out, none, nothing, so stop pointing at your computer and yelling “internet” at me!) or how an outliner might be of use to me. But something in this post intrigues me.
The best on the planet you say? Colour me interested and add another doodad to the Swiss army knife that is DevonThink.

What’s the minimum age to get the fogie designation?

Speaking personally, I think some people gravitate toward outlines, others away.
Just like some people like Zettelkasten or Kanban or Johnny Decimal, etc. Be open to possibilities but don’t try to shoehorn a size 13 into a size 10.

Speaking personally, I think some people gravitate toward outlines, others away.

I think I’ve been, umm…in a geostationary orbit with outliners. Maybe it’s time to brake, leave orbit and prepare to enter the upper atmosphere of Planet Outliner.

As the old adage goes, “To someone with a hammer, everything looks like a nail.”

And while I agree to a certain extent, effective and consistent use of outlining (and the other methods I mentioned) requires having an bent toward that method. From example, I have never been a fan of outlining as it isn’t how my mind works. On the other hand, flowcharts feel much more natural to me.

While I encourage people to be teachable and curious, I stand by my comment about there being no one size fits all.

The problem with outlines for me is they encourage hierarchy, not story-telling.

There is a feature DT could support that would give story planning a boost.

Imagine a hierarchy of groups. They are chapters, or acts, or some list of subdivisions of a story.

In each group are notes about what goes on in that chapter or act. They are tagged various ways. Characters, story arcs, etc.

It would be nice to filter them and see the filtered list maintained in the order the documents appear.

I’d like to see a mock-up of what you’re describing.

Thank you. Thank you very much.

It’s a stupid joke, but people thought it was funny when I was a child and said it to adults. When I say it now it gets barely a laugh. Now that I’m 19 (in Bruno’s sense).

It was supposed to be ridiculous in this forum, and I’m glad you appreciated the effort it took me to type it.

Here’s an outline for Act 1 of a drama involving Sweet Nell, Syndley Whiplash, and Dudley Doright. 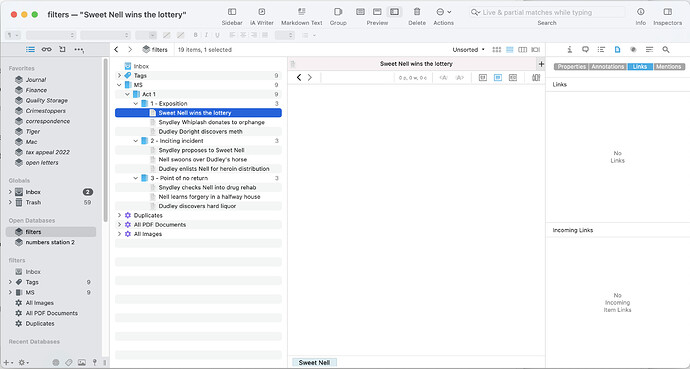 In my fantasy Devonthink, I’ve right-clicked on Act 1 and chosen the fictional Filter option: 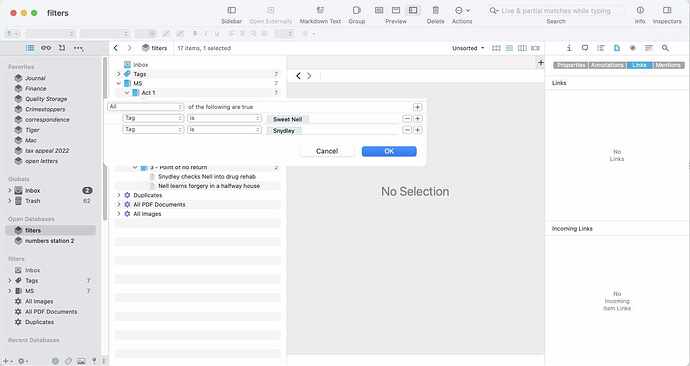 The popup is like creating a smart group. I tell it Act 1 and its child groups should display documents tagged Sweet Nell or Snydley.

When I click OK, the documents not tagged with either of those are suppressed. Groups containing one or more documents would still appear, showing where the highlighted documents fit in the unfiltered hierarchy of groups. 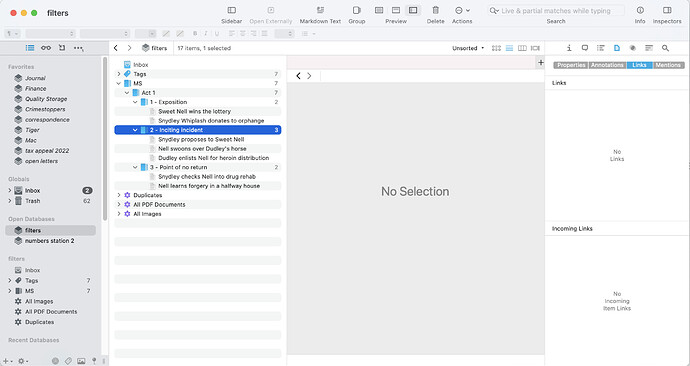 Existing smart groups would do the trick if they preserved the group hierarchy and kept the displayed order of the documents.

The notes supporting the sequence of scenes comprising a book may cover several plot threads. Filtering by metadata, keeping the order current, and keeping the groups in place would let an author see the notes for one plot thread at a time, or find all the places the McGuffin fell into enemy hands, or whatever.

Have you looked at the Tags filter pane?

Well, shut my mouth. There I go again, overlooking the painfully obvious.

I usually turn the sidebar off after opening a database. I will use tag filters in the future. A lot!

I was about to whine about the tag filter only being an AND function, but I see that’s shortsighted.

Search with “any” and “all” clauses, command-A to select all the documents found, add a temporary tag, then filter on that.

Filter on a search result, select all, merge documents - there are lots of possibilities here.

Dang, this is handy!

In case I forgot, THANK YOU!!!