DT3 B2 thanks! (but please avoid standard MacOS shortcuts)

Command-K in the Finder is Connect to Server.

In the Finder, yes, but many apps use command-k on highlighted text to make a link, including Apple’s own (Notes app, e.g.)

Add me to the list. I use the Emacs-ish editing commands exclusively in nearly every Mac app that lets me edit text. I feel hobbled without them. That also extends to navigating in dropdowns etc. using CTRL-n and CTRL-p.

Not sure if I qualify as “everyday people”, though am certainly one who heavily uses Emacs-style Key Bindings during text editing … as I’ve done even while composing this reply in Safari.

If any of you run into the problem that DEVONthink 3 overrides shortcuts that are typically used for other purposes (e.g., Emacs editing keys like control-d), you may want to try disabling the DEVONthink keys. This can be done using the trick of assigning new shortcuts in the macOS System Preferences ➜ Keyboard ➜ Shortcuts panel. A good explanation of how to do that can be found in this answer to a question on apple.stackexchange.com.

I just did that to rebind the items in DEVONthink 3’s View ➜ Document Display submenus and it made it possible for me to once again use control-d for forward-delete when editing Markdown documents in DEVONthink.

(This is not a complaint about DEVONthink 3; I know how hard it is to find usable keyboard shortcuts for applications that have a lot of commands. It’s just not possible for an application to stay clear of all keyboard sequences that could conceivably be used by other applications. Providing the user with a way to redefine the shortcuts directly in the application would be nice, but obviously more work for the developers. In the absence of that, the Mac facility to override shortcuts works well enough.)

You’re making a good argument, but I can understand that the developers might be worried that, if they remap the commands in an effort to respond, there will be a whole new load of complaints from people who have come to accept the current ones and don’t understand why they had to change. (No doubt remapping the ones you mention will cause a cascade of other remappings that have to happen.)

If changes are going to happen, now (during the beta period) is a good time. So it might be good for you to make a (comprehensive, if possible) list of your suggested mappings. Then people with knowledge/experience in this area have something to debate, and the developers have a specific and positive proposal (as opposed to negative requests) to consider, if they’re open to it.

What about the option to make the shortcuts user configurable? I use several apps that allow that.

I understand it’s difficult and sympathise with the developers, but these are new shortcuts introduced in the latest beta so there is no user base which has grown accustomed to them, and they are not marginal ones, but core to the OS text editing suite. In the case of the Display shortcuts, they have actually changed from Beta 1.

What about the option to make the shortcuts user configurable? I use several apps that allow that.

That’s exactly what System Preferences allows everybody to do with any application since the early beginnings of macOS. We try not to reinvent the wheel if possible.

Do you mention this in the documentation? In my experience there is not this many people who are actually aware of that option, despite its usefulness. A hint somewhere in the preferences panel might also be appreciated.

The editing there being a bit tedious, of course because of having to manually type the right item name instead of just being able to map the keys. But I acknowledge that creating an extra UI for mapping keys falls out of scope in most cases, especially with rather limited resources.

In our experience, a great number of our users:

We have a broad range of clientele. It’s not just business, academia, and the techies. People who are inclined to doing things like remapping keys, would already know about the Keyboard preferences, apps like Karabiner, etc.

But I acknowledge that creating an extra UI for mapping keys falls out of scope in most cases, especially with rather limited resources.

It’s actually not the limited resources. We simply think that rebuilding what Apple has already built is unnecessary. Why not use what’s already there. We could add a hint to the documentation.

Yes, they offer only but necessary essential feature of remapping shortcuts.

But for software where there can be power users who may want something better than just essential, it would be great to have the ability to save , restore, view all, shortcuts “sets”. RStudio is great at this. Any shortcut and can assigned to anything and to scripts. There is the ability to store the settings, make changes, store those and recall.

I don’t see this as THE feature stopping anyone from using DT since there is basic support in MacOS and there seems to be plenty of other more important topics on the forum but I do see it as a power user feature that would be very handy if ever added to DT.

We simply think that rebuilding what Apple has already built is unnecessary. Why not use what’s already there.

Well, the system version is tedious to use, does not check for conflicts, hence does neither allow for conflict resolution, cannot administrate different sets of shortcuts, … The latter would be great for people who have the shortcuts for their major productivity/office imprinted in their muscle memory. DT could offer default sets that are compatible with MS Office, the Apple suite, Scrivener, etc. (see OmniGraffle’s solution). Keyboard shortcuts still are the simplest way of speeding up one’s workflow system-wide. Alas, they require a high amount of memorisation. And the more advanced people get with using them the less likely they are to fully learn them for every software out there they are using, thus focusing efforts on the respective major productivity apps. Last but not least, I would like to argue that shortcuts are not a power user but an intermediate user feature – and hence deserve better support, enabling people to make progress.

One solution is to use Keyboard Maestro and conflict palettes. I’m certainly not capable of memorising many shortcuts these days, so Keyboard Maestro rescues me in situations where there are conflicts. Takes a little while to set things up, but once done it works well for me.

+1 regarding the standard ctrl characters. Ctrl-p and ctrl-t are the ones that are causing me the most pain at the moment and have caused me to remap in the System Prefs.

Yes, any advance on this? Control-T is REALLY irritating. I use it all the time for its primary purpose, because transposing characters is one of my most frequent typing mistakes. I shouldn’t really have to go into System Preferences to restore normal functionality on my computer.

Disappointing to see there is no change in the latest beta.

Haven’t they? That’s a bit disappointing as you say — I didn’t notice because I’ve overridden all the damaging shortcuts in System Preferences.

In case it’s any use, here’s a screenshot of the ones that cause a problem: obviously, put whatever shortcut in you want and it will free Ctl-d, Ctl-t etc back to normal use. (The Display shortcuts are a bit weird because I never actually use them – I use a Keyboard Macro palette instead – but you need to give the feature some shortcut otherwise you can’t get back to the correct one.) 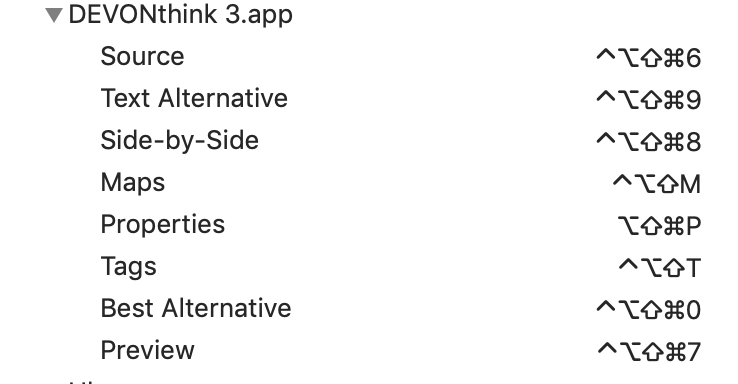