DT3 B2 thanks! (but please avoid standard MacOS shortcuts)

I’ve just downloaded and installed the new Beta and it’s very welcome indeed. Thanks very much — it’s impressive how much work has gone into it and how quickly you’re responding to user requests!

The Control-d mapping is particularly unfortunate because it’s been attached to Preview and the old bug from DT3B1 is still there – any shortcut made in System Preferences is attacked to the menu separator name Preview, not the command itself: 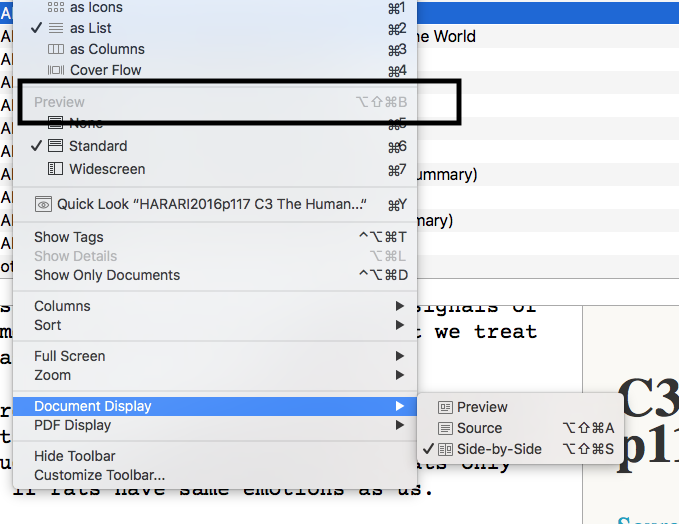 Fortunately this can be overridden in Keyboard Maestro.

These aren’t marginal, optional combinations, they’re been an integral part of the standard MacOS text suite for at least fifteen years and probably longer and many people use them all the time. I know that we can override them but we shouldn’t have to hunt through menus to do this for standard OS shortcut keys in such a fundamental area as text editing.

Thanks for listening, and thank very much again for the new Beta!

Have you seen Apple’s track record on complying with their own guidelines?

I know shortcuts are a pain and it’s really difficult to find alternatives, but the basic Control and Cmd keys plus single letters are the absolute fundamentals… it takes a lot to retrain old fingers and to have do it for something as basic as text navigation keys. It’s like redefining cmd-c for some of us

I’ve no idea, but I imagine that a fair proportion of people with some background in computing use some of them. Why wouldn’t you use Control D instead of Fn-delete? Or Control A/E for beginning / end of line? Control-k for delete (to end of) line. They’re far more convenient than having to stretch to use the arrow keys especially if you remap Caps-Lock to Control as nature intended

Those shortcuts work in the terminal too, and they’re really useful…

Point is, why override something that’s been part of the OS since the year dot for no reason?

I have to agree that apps should stay clear of standard key bindings if ever possible, e.g. Emacs key bindings like ⌃L and ⌃T . Sometimes it’s not possible when powerful apps run out of shortcuts. I’m sure we’ll find a solution.

Those control characters go all the way back to NextStep and the editing view mimic:ing emacs controls. They are handy but few outside the programming world really knows about how to use those. So for me it’s Ok if they are broken (even if I use them, seldom).

Well, I’m an old Emacs user (30 years now) and long-time DEVONthink user, and I fully agree with @brookter on this issue. It is not okay with me if these key bindings get broken.

My personal annoyance is command-K being assigned to “mark unread”, when it is the Mac default for “make link”. Sure, I use keyboard shortcuts to change them, but for some reason shortcuts don’t always work…

command-K being assigned to “mark unread”, when it is the Mac default for “make link”.

Command-K in the Finder is Connect to Server.
Command-L was Make Alias forever, but it’s now Control-Command-A

My personal annoyance is command-K being assigned to “mark unread”, when it is the Mac default for “make link”. Sure, I use keyboard shortcuts to change them, but for some reason shortcuts don’t always work…

Actually, we used ⌘K because at the time the newsreader we were using used it as default.

And earlier versions of Mail used this shortcut too, IMHO.

In any case the text editing now is broken for me. ;-/

Command-K in the Finder is Connect to Server .

Actually, we used ⌘K because at the time the newsreader we were using used it as default.

Actually, I’ve connected to so many servers in my life, I sometimes hit Command-K unintentionally!

One of my most-used key combinations is Ctrl-T because I so often transpose letters while typing. I refuse to use autocorrect because I regard it as a fount of all sorts of mistakes, so I would be sorry not to see Ctrl-T used for its proper function. It would be a serious inconvenience to me (though it is true that I catch some of my favourite mitsakes with Typinator). Like that one.

The one that drives me nuts is command-delete. In every other app when editing text, that shortcut deletes the entire line of text left of the cursor, whereas DevonThink uses it to immediately delete the file you’re viewing. As a developer that’s a shortcut I use constantly.

Deleting the file is fine if you’re not editing text at the time, and just have the file selected - but if I’m editing a file’s title, or editing a text note directly in DevonThink, I find myself constantly deleting files by accident.

I find myself constantly deleting files by accident.

Just be more careful then

All these comments are noted, and under consideration.