The first time I ran DT3 after installing the beta yesterday, I could have sworn it was populated with a default set of smart groups and smart rules. However, the second time I launched DT3, it replaced those default groups and rules with the ones I had in DT2.

Is my memory deceiving me or did those default groups/rules exist? Is there any way to get them back without a complete reinstall? Or to prevent a fresh DT3 install from replacing them with what’s already in DT2?

Some of them piqued my interest because they dealt with some of the new features, and I’d like to see what they did.

I noticed that too.

Also it had a “reminders” but now is not there anymore

These are the default items in the Smart Groups and Smart Rules. 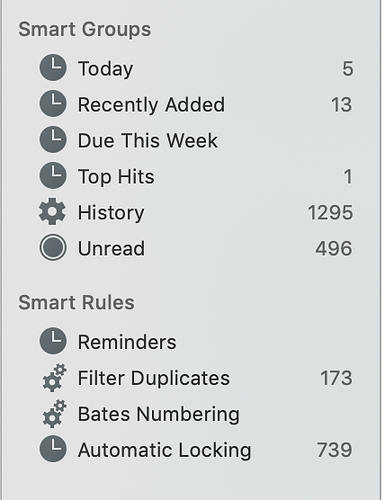 Are you running v2 and v3 in the same account? 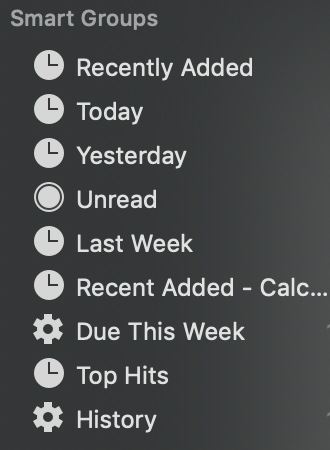 Yes, on the same macOS user account, but I am not sharing databases between them.

And I realize that smart rules are new to DT3. All of the default smart rules were cleared on the second launch so that all I have now are the smart folders from my DT2 install and no smart rules.

I have the same problem here… after opening my DT2 database in DT3beta, all smart rules of DT3beta disappeared (none of them in your screenshot is visible anymore), and the smart groups changed to those that I had in DT2. How to fix this? Why does DT3beta clear all smart rules?

Do I need to do a clean uninstall of DT2 and DT3 and then re-instwll DT3 in order not to have this problems (how to uninstall both apps correctly?)

Or will the smart rules be deleted again after importing my DT2 databases?

additional information: I am also using DTPO2 and DTP3beta in the same account, but never at the same time. Maybe I should uninstall DT2 and DT3, the re-install DT3 and then open the database again, would this help? Do I need to re-upload everything to icloud for the icloud sync again doing so? Or how to proceed for a clean DT3 installation? Hopefully, this fixes this smart rule/folder issue?!

DT3 is picking up the Global smart groups from DT2, likely by design as it would be transitioning from 2 to 3 when someone upgrades. So technically, it’s not a problem, but more likely intended behavior.

Again, another reason why I keep repeating it’s best to use a separate user account and test data for testing. This is a beta test.

The other option would be to just convert to DT3, however it’s not something I would advocate but many people have (including two of our most long-standing users in these forums).

If I had anything to say about it, I’d uninstall DT3 and install it afresh on a new user account.

so, if I uninstall DT2 and 3 (deleting also all library folders etc according to the help file manual), and re-install DT and import the database then, I can keep the smart folders and smart rules of DT3 (as they are not in thr database)?

What happens to icloud sync in such a situation? Should I deactivate/delete icloud sync of devonthink before uninstall/reinstall? or what’s the best way to proceed?

Concluding, what is the best way to
completely uninstall DT2 and DT3 (and also how to handle icloud sync while doing this in order not to create any problems: simply deactivate it before? or keep it) before doing a clean install of DT3? Installing it on a new account is not feasible, as other software and other settings would have to be set up, too, from scratch.

@BLUEFROG please follow up (I know that switching to DT3beta is at my own risk). thanks so much in advance

Concluding, what is the best way to
completely uninstall DT2 and DT3 (

I would also like an answer to that question. I’m ok with the associated risk running beta software, and I need to continue using my current user account. In short, how can we remove all traces of DT2 and move to DT3?

According to the help file, DT2 and DT3 can be completely un-installed deleting these files/folders.

UNINSTALLING DT2
To remove (uninstall) DEVONthink Pro Office completely from your Mac, trash the following files and folders (~ stands for your Home folder):

Bookmarklets from your web browser

UNINSTALLING DT3
If for some reason you need to fully uninstall DEVONthink from your Mac, trash the following files and folders (~ stands for your account’s home folder):

Then I would perform a clean install of DT3.

However, I am still waiting for a clear instruction, how to handle icloud-sync BEFORE and AFTER uninstalling DT2 and DT3, and before doing a clean re-install of DT3. Do I need to deactivate it? Delete anything? In order not to risk any problems.

Maybe @cgrunenberg or @BLUEFROG may help how to proceed to get a clean DT3 installation (after having installed DT2 and DT3 in the same account, with all DT3 smart rules and smart folders, that have been deleted by DT3 after opening a DT2 database).

I am aware that DT3 is beta, but I am doing regular backups, therefore I am willing to switch to a clean DT3 installation.

Thank you @vinschger, this is really helpful! I also found:

I promise I won’t complain if manage to do that. I do have multiple versioned backups of my entire hard drive.

Regarding iCloud syncing, assuming you’re setting up from scratch, you’d just enable the sync location in DT3 - entering the encryption key if specified previously, and sync. The databases are identified by the UUID, so it should have a message about merging with the remote database. Just check the checkbox and it should sync.