In DT2 I could move Smart Groups into a database and into folders. I hope this feature will not be removed from DT3 as it still supports such smart groups created in DT2.

Okay, that’s true I always moved smart groups from a database to the global groups before, what is possible in both versions.

The problem in DT3 is, that I now can open a database structure inside the sidebar. There I tried to create a smart group inside a folder. That does not work as expected. So that’s the reason why I want to move the global smart group into a folder. I never needed that before.

You can create the smart group e.g. via the main view’s contextual menu.

I know that but the new feature let me think it’s also possible there.

I understand that you won’t confuse the users. But I also was confused about the context menu that is not contextual

Maybe when clicking on a folder the menu could be extended like this: 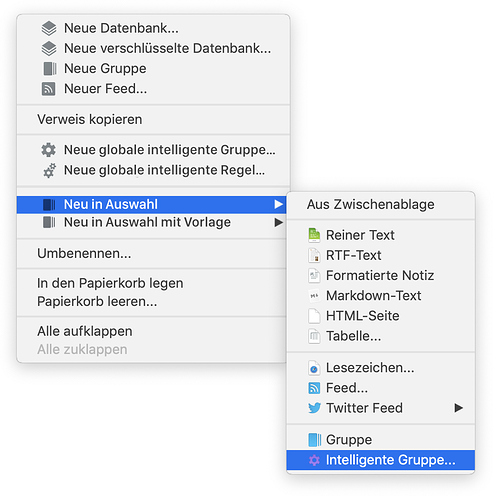