Would I be right in thinking that the DT Packet Sync generates far more files for the sync?

This depends on the files - small ones are merged by sync, huge ones are split. But you shouldn’t get such notifications if you exclude the folder ~/Dropbox/Apps/DEVONthink Packet Sync folder in the preferences of the Dropbox.app. This speeds up also the sync.

I have excluded the folder…

I have no complaints about the sync speed - not being any the wiser!

The notifications are from Dropbox: users can restore deleted files within a stipulated period if required.

Would I be right in thinking that the DT Packet Sync generates far more files for the sync?

Our sync engine doesn’t merely copy files to a sync location. As noted in the built-in Help > Documentation > In & Out > Sync… 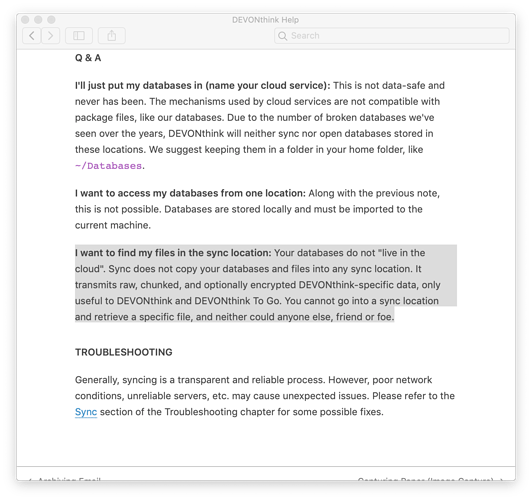 So, yes there are a different number of files being transmitted than the number you’d see in a database, especially if you have large files.