I have been using DTGO since the first day of its release and really like it so far. I have synched a few databases and never had any bigger issue. One thing I have observed is that the app seems to get slower the larger the DB growths. Can anyone confirm this behaviour? For example: Scrolling through the folders of a DB with less than 1000 items works absolutely smooth, no lagging. Using my biggest DB with more than 7500 items results in lagging when it comes to open the DB (took more than 3 to 4 seconds instead of nearly no time compared to the smaller DB) as well as scrolling through the folders (scrolling stops and continues after one or two seconds). No big issue at all, however, just wanted to know whether something is wrong with my app or if it is a general topic.

No big issue at all, however, just wanted to know whether something is wrong with my app or if it is a general topic.

There’s nothing wrong but the next release will improve the performance.

Just to be on the safe side, before installing 2.0.1 I erased the app and old database totally and reinstalled and did a new sync and index off course.

Using my biggest DB with more than 7500 items results

Are these records nested in many groups or are they ungrouped / grouped in larger batches (say, 1000+ records out in the open in one group) ?

Thanks for your feedback!

@Jim: All items are nested in groups. The first level has 12 groups, scrolling leads regularly to the described lag. When I scroll it suddenly stops, after two or three seconds scrolling continues. Also I found out that some icons seems to be wrong (tag item for groups, but not always).

I am facing the same issue with lagging. It is particularly bad when DTTG is syncing. I do have about ten databases, many multiple GBs. And out of the ten, one of them indeed contains most of the files in a single fold, because the DB it is syncing with from my Mac is an index of my Bookends attachments folder.

In addition, I think I am noticing that the lag is particularly noticeable and crippling when used in portrait mode (i.e. No/slow response when you try to move “up” in the group hierarchy to a previous group).

While this is causing my use of DTTG to suffer, I would like to acknowledge that these growing pains are probably inevitable, and the team has done a great job with the release. Many thanks.

@talazem: Thanks for the support and acknowledgment that software development is an ongoing process (and a lot of very hard work). Much appreciated.

@et al: If you have larger databases and are seeing lag, check DEVONthink’s File > Database Properties > … for the databases you are Syncing. If you ‘d like please post the data here as we are looking at performance issues with database with large numbers of records AND large numbers of words. You could just upload screencaps of the Statistics section of the Database Properties for these databases, like so…

Jim, please find attached a screenshot of the statistics. 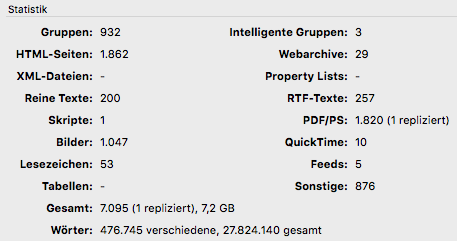 Excellent! This is what I was hoping to see.

I have massive problems with 2.0.1 , normal working is not possible any more. Ok, my database is very large, but 1.5.8. worked fine. 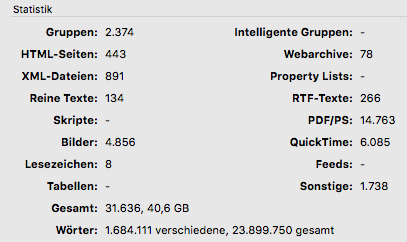 What kind of problems? Does it work after updating to v2.0.3 and ensuring that there’s enough space on the iPad/iPhone?

What kind of problems? Does it work after updating to v2.0.3 and ensuring that there’s enough space on the iPad/iPhone?

But the app hangs on every restart, from scratch or from background, for about 4-6 seconds.

Please bring back automatic fullscreen-mode in portrait-format, as it worked in version 1.5.8. That was a great feature to help in daily work.
Or at least a switch for fullscreen-mode, as it is present in landscape-mode in version 2.0.3. now.

Thanks for support,
Robert